Time to stop aiding and abetting the EFF's assault on democracy 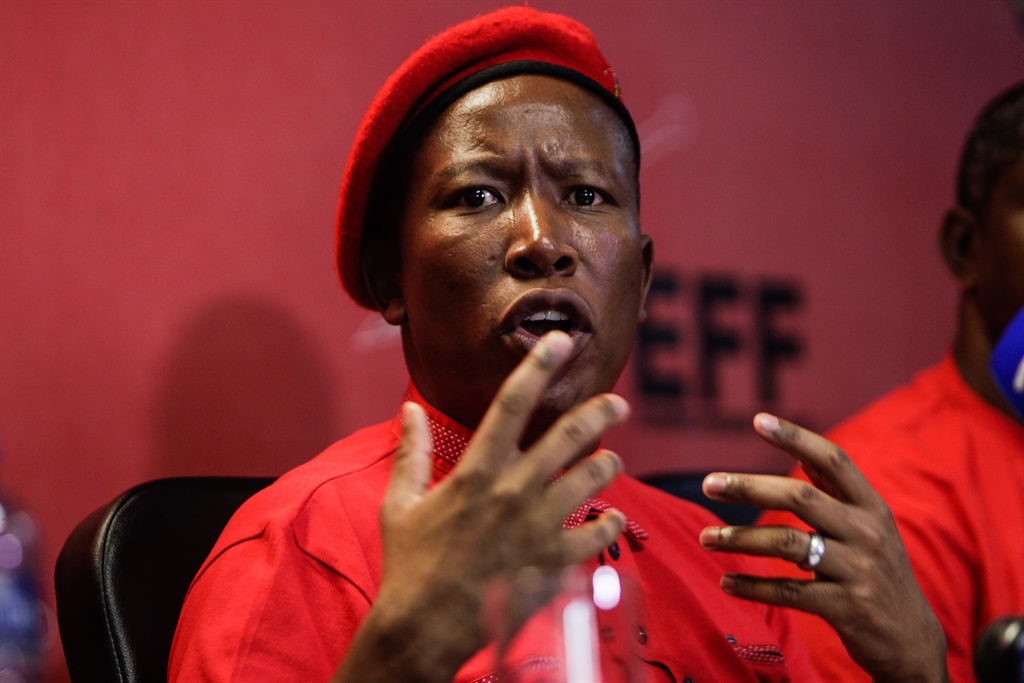 EFF leader Julius Malema addresses the media on his party's plans ahead of the State of the Nation Address in February 2018. (Photo by Gallo Images / Sowetan / Alaister Russell)

If we allow loud-mouthed groups to dominate the national discourse purely because they're controversial and make the most noise, we oversee the distortion of public opinion, writes Max du Preez.

Okay, so the EFF's protracted honeymoon with the media seems to be over at last. But do editors and journalists have the guts to do what should be done now?

For one, there shouldn't be another live broadcast of an EFF press conference or rally, not after the one last week outside the Zondo commission when Julius Malema and Floyd Shivambu's blatant lies, threats against the media, hints at coming violence and crude racism were broadcast on live television.

I would strongly argue that the footage and recordings of all future EFF events should in future be viewed and fact-checked – and stripped of incendiary talk and wild defamation – before they are broadcast on radio or television.

Many in the South African media appear to be oblivious of the fact that the reality of post-truth and alternative facts has also arrived in our society.

Please repeat after me, colleagues: Facts matter! And it is our primary job as journalists to make sure that they do. We are not stenographers, we are the public's eyes and ears and noses on the ground.

We have to have the same conversation as South African media that US media like the Washington Post, the New York Times, MSNBC and CNN had about Donald Trump's disregard for the facts. They decided not to simply report them, but to also point out his blatant lies.

I remember recently watching CNN and seeing the rolling strapline on the screen stating, "Trump: I never said Japan should have (He did)."

Perhaps media outlets should start publishing the Truth-O-Meters used in some parts of the world to quickly fact-check politicians' utterances. Or perhaps media houses should all contribute to Africa Check to do it on a daily basis for everybody.

We as journalists should guard against acting as publicists for the EFF's theatrics and publicity stunts. If we don't fall for their politics of spectacle every time, they will have to come back to earth and practice proper, issue and policy driven politics.

When the EFF makes blatantly racist statements, we should report it as we do right wing racism: as an exposé of racism and with commentary, rather than as run of the mill political statements.

It is irony upon irony.

The media is the guardian of our open society, which in turn is the backbone of our democracy. An open society is characterised by tolerance and free speech.

And yet the media has been aiding and abetting the EFF's all-out assault on our openness and tolerance with its generous, often unquestioning publicity, completely out of proportion to the popular support the EFF has.

The politicians who have attacked media freedom in a way unprecedented since we became a democracy, and victimised, intimidated and threatened them with violence (even acting on these threats on occasion), became the media's darlings.

We were all on our high horses, flaming sword in hand, fighting Bell Pottinger's propaganda onslaught during the Zuma-Gupta era.
The EFF is Bell Pottinger on steroids, but now our horses are suddenly lame.

Malema played the media like an organ, and too many of us danced to his tune like trained monkeys. Whenever he feels unloved or under attack, he has a rambling press conference, mostly spewing nasty gossip, innuendo, insults and threats. And the media (forgive the generalisation in the interest of brevity) loves "the CIC", hanging on to every word.

Why is that? Partly, I think, because some journalists confuse entertainment with substance, but also because of fear. Fear to be called out as a racist or a tame black in the service of whites, and a very real fear that they be called out by name and threatened with retribution by the EFF mob, on social media and, as has been happening increasingly recently, in person.

If Malema, Shivambu or Dali Mpofu don't like what a journalist reports, he/she is tagged with the label "Stratcom agent" – even journalists with well-established struggle credentials like the SABC's Thandeka Gqubule.

That label is hung around my neck every week on social media, despite the public knowledge that I was one of the journalists in the 1980s who exposed the apartheid government's "strategic communications" project of propaganda and disinformation.

I've been feeling like a stuck record for a long time now about the media's handling of the EFF and other people and groups (from left and right) who have little public support, but scream their hatred, lies and intolerance out so loud that they're allowed to dominate the public discourse.

No, it's not censorship, it's the opposite. If we allow loud-mouthed groups to dominate the national discourse purely because they're controversial and make the most noise, we oversee the distortion of public opinion.

Editors and journalists have to make judgment calls every day on what should be on the news agenda and what prominence what news should enjoy, because all events can't be covered in the same detail. We have to do it with balance and fairness and the public should keep us honest. Here's my honest opinion of the EFF. I think it has a deep affinity to violence, I think it is racist, dishonest, undemocratic, militaristic and proto-fascist and its senior leadership is probably as corrupt as the worst of the Zuma lot.

I think the EFF links to the looting of VBS Bank represents the true face of the EFF, and it's not much different from that of Zuma and his cronies: in the name of empowering and financially emancipating black people, they steal them blind, especially the poor.
It should therefore not be a surprise that the EFF is suddenly siding with the Zuma faction in the ANC and helping it with its fight-back against the Ramaphosa faction.

Its war against Pravin Gordhan is a war against accountability and an effort to discredit those who could expose the EFF's scandals.

All media should from now on carefully consider on a daily basis whether an EFF statement or event is really newsworthy or an attempt to obfuscate, mislead or manipulate the media.

Journalists who give unnecessary oxygen to politicians who undermine our democracy and our open society, are betraying their real calling as servants of the truth and of freedom of speech.

We live in a world where facts and fiction get blurred
In times of uncertainty you need journalism you can trust. For 14 free days, you can have access to a world of in-depth analyses, investigative journalism, top opinions and a range of features. Journalism strengthens democracy. Invest in the future today. Thereafter you will be billed R75 per month. You can cancel anytime and if you cancel within 14 days you won't be billed.
Subscribe to News24
Related Links
DA propaganda is straight out of EFF rulebook
Only unpopular decisions will lead SA out of Zuma ruins
ANC's demise could realign political forces
Next on News24
DA propaganda is straight out of EFF rulebook

Here are the Daily Lotto results
Full list of lottery results
Voting Booth
Have you and your family been counted in Census 2022?
Please select an option Oops! Something went wrong, please try again later.
Yes
48% - 754 votes
No
52% - 832 votes
Previous Results
Podcasts
PODCAST | The Story: What is behind Khayelitsha's recent mass shootings?