Overvaal: Where is the moral leadership? 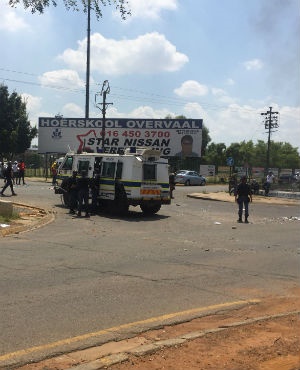 A police nyala is seen outside Hoërskool Overvaal school during the protest action on Thursday. (Iavan Pijoos, News24)

Shortly after I took up my post as South African Ambassador to Ireland in 2001 the Holy Cross dispute occurred in Ardoyne – a part of Belfast in Northern Ireland.

Like many towns in apartheid South Africa, Ardoyne was segregated. Unlike South Africa it was not on the basis of race, but religion. Protestants lived in one area and Catholics in another.

However, Holy Cross, a Catholic primary school for girls, was situated in the middle of a Protestant area. In June of that year Protestant loyalists began picketing the school. They claimed that Catholics were regularly attacking their homes and were denying them access to certain facilities.

For almost three months, hundreds of protesters tried to stop the schoolchildren and their parents from walking to school through their area. It was truly awful to watch. Adult men and women stood on each side of the road, held back by police in riot gear and shouting sectarian abuse at the girls and their parents. Stones, bricks, fireworks, blast bombs and urine-filled balloons were thrown at them.

Some protesters even brought their children. One of the most shocking scenes I saw was a toddler in a pram being encouraged to throw something at the schoolgirls. How terrible to teach children that young to be prejudiced and to hate!

Watching the scenes outside Hoërskool Overvaal over the last week, I remembered the petrified little faces of the girls at Holy Cross. Never did I for a moment think that something similar would happen in my country.

Let me be clear: I have and never will be a “taalstryder” or fighter for the preservation of the Afrikaans language or any other language for that matter. I am also fully aware of the fact that Afrikaans became associated with much of the evils of apartheid South Africa and that many Afrikaners are still deeply racist.

Let me also emphasise that I am totally infuriated by the fact that so many children, particularly African children, still have no access to a proper education. I am ashamed at the role my ancestors played in this legacy.

I am also furious at the party that I represented in Parliament post-1994 for not fixing this. The education system is certainly one of the biggest and most shameful failures of the ANC government. There is absolutely no excuse or reason that could justify the obstacles that parents and their children continue to face.

But here is the thing: it is not the children’s fault. Nor is it the fault of the parents – and by that I mean the parents and children of all races.

In the case of Overvaal the court ruled that the Afrikaans school did not have capacity to facilitate the English speaking children. It also ruled that there was space for them in two English schools close by. Yet the MEC and department had insisted that this Afrikaans speaking school admit the children. Surely that is a less than ideal situation, not only for the school, but also for the children? And not because of a race issue, but because the children would clearly not get the education they deserve because of a lack of capacity.

Parents were duly frustrated, but instead of solving the issue the MEC decided to appeal the case (insisting that both the Afrikaans and English schools lied about their respective capacity) and used strong inflammatory language suggesting that Overvaal had a racial bias.

The next day some of the parents of excluded children started protesting outside the school. Unsurprisingly, the EFF arrived as well (nothing like a bit of political opportunism to inflame an already volatile situation).

Then some white parents also arrived to “defend” their children. Insults were exchanged, people were kicked and petrol bombs were thrown. On Monday, not to be upstaged by the EFF, 130 MK veterans and Sadtu members went to the school and toyi-toyied outside. They shouted slogans against Afrikaans and threw rubbish at the gates.

All of these protests happened while little, petrified children stared out from behind the school fence.

So what is the end-game here?

Unless the judgment is overturned on appeal (months from now) the court ruling stands. Even if people disagree with the judgment, protesting outside the gates is surely not going to change anything?

The political parties should show some moral leadership in this matter and not become part of the problem. The EFF in particular, who constantly use the courts for their own political advancement, can’t respect the courts only when it suits them.

More importantly we have to consider what this whole affair is doing to the children. You only had to look at the images of the Irish children at Holy Cross to know that another generation of children were going to grow up to be prejudiced and intolerant. That will certainly also be the case with some of the Overvaal children who witnessed the protests as well as those who were excluded. In fact, some of them told journalists that they believed that they were excluded because of racial prejudice.

It was always the responsibility of the MEC and education department to fix this problem, but shamefully they became part of the problem and only further inflamed the situation. So eventually it was up to Minister of Basic Education Angie Motshekga to intervene in the matter yesterday and stop all further protests outside the school gates for the “sake of the children”.

She is right. No one has the right to use children to fight political battles. They are the innocent ones.

And when these problems arise the adults on both sides of the conflict have a responsibility to act and talk in a manner that doesn’t raise another generation filled with racial prejudice and hatred. Otherwise South Africa, like Northern Ireland, will still see these scenes of hatred and prejudice generations from now.

- Melanie Verwoerd is a former ANC MP and South African Ambassador to Ireland. Disclaimer: News24 encourages freedom of speech and the expression of diverse views. The views of columnists published on News24 are therefore their own and do not necessarily represent the views of News24.

We live in a world where facts and fiction get blurred
In times of uncertainty you need journalism you can trust. For 14 free days, you can have access to a world of in-depth analyses, investigative journalism, top opinions and a range of features. Journalism strengthens democracy. Invest in the future today. Thereafter you will be billed R75 per month. You can cancel anytime and if you cancel within 14 days you won't be billed.
Subscribe to News24
Related Links
Someone please save the DA from itself
Can Ramaphosa broker a deal to avoid becoming a one-day-special?
Why I fear for South Africa
Next on News24
Melanie Verwoerd | The scum of the earth gets off lightly while women's lives are destroyed

Here are the Daily Lotto numbers
Full list of lottery results
Voting Booth
Are you going to keep wearing a mask following the announcement that it is no longer required under law?
Please select an option Oops! Something went wrong, please try again later.
No ways, I'm done
5% - 6323 votes
Yes, I still want to be cautious
90% - 109621 votes
Only certain circumstances
5% - 5621 votes
Previous Results
Podcasts
PODCAST | The Story: We unpack the Eastern Cape tavern tragedy