The ANC is lonely and it's crying out for a challenge 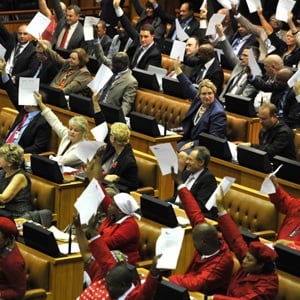 The opposition benches during a sitting of the National Assembly in Parliament.
File photo

The ANC is lonely. It needs a boxing partner at the centre of the ideological ring where power ultimately lies.

Only three parties could have posed a real threat to the ANC had they had proper leadership beyond the post-launch honeymoon.

The first was Bantu Holomisa’s United Democratic Movement (UDM). Despite reasonable national support (3,4 percent of the vote and 14 seats in the National Assembly) at the time when the ANC was unassailable, the UDM declined sharply afterwards, landing at just one percent in 2014, securing a meagre four seats.

The second was Patricia de Lille’s Independent Democrats (ID) until she decided to be swallowed by the Democratic Alliance (DA) – a move she may or may not be regretting depending on the mood of the James Selfe-led federal executive of the party. The ID got 1,73 percent at the polls and secured seven seats in the National Assembly when it first contested in 2004.

The third was the Congress of the People (Cope) with the most promising electoral debut in 2009 when it secured 7,42 percent, sending 30 MPs into the National Assembly. Prospects looked good for the party. So good that it was worth fighting for.

And fighting for it is were the unmitigated egos of Mosiuoa Lekota and Mbhazima Shilowa with such ferocious rivalry that came only second to the Pan Africanist Congress’s legendary skirmishes. The wreckage of the party is there for all to see despite Lekota’s sole efforts.

There is one thing all three parties had in common: although they were far from matching the ANC’s support base that remained above 60 percent, they were ideologically similar to the ANC.

Had they not been consumed by internal ructions, they would have been best placed to challenge the ANC’s ideological centre as their support base was typical ANC constituencies. Electorally, they did very well at launch before political mismanagement began to take its toll.

Although Holomisa didn’t always articulate his party’s ideological position clearly – resulting in Trevor Manuel once describing his proposed policies as voodoo economics – he was nevertheless close to the ANC’s centre in South Africa’s ideological spectrum.

Similarly, De Lille’s ID – whose foundation had Nelson Mandela’s moral support – was more centre-left than the extreme Pan-Africanism of his former party, the Pan Africanist Congress.

From the beginning Cope positioned itself as the real ANC that would be faithful to the ideals of the Freedom Charter. Founded on solid grounds of propagating constitutionalism, the party, better than any other, was well positioned to take on the ANC. Like the UDM, it was a typical rainbow nation of South Africa in its support base as well as the general leadership outlook.

Since the decline of these parties, we haven’t seen a genuine attempt to take on the ANC even at the time when it was at its weakest under Zuma. The failure to make a decisive dent in the ANC’s support base in the 2016 municipal elections, when many of its supporters were extremely angry about the incompetence and corruption of Jacob Zuma, was less about the strength of the ANC than it was about the weaknesses of the opposition.

The DA and the EFF have no intention of gravitating to the centre of the ideological spectrum, where real power lies. In fact, the EFF’s policies and outlook are a cocktail of extremely narrow African nationalism, anti-white rhetoric (that positions the party on the extreme right of the ideological spectrum) and top-down communism and state-centralism (that puts it on the extreme left).

South African voters have not shown much enthusiasm for either extreme left or extreme right political parties. The PAC fought elections on the basis of representing black interests especially on the expropriation of land – a left ideological position. But one of its former leaders once advocated for the chopping off of the hands of thieves – a right wing-cum Sharia law proposition. The party currently has less than a quarter of a percent and a single seat for its leader in the National Assembly.

The Freedom Front Plus, on the right of the ideological spectrum and advocating exclusively white interests and privileges, has averaged 0,8 percent of the national vote. The point is clear: extreme right- or left-wing politics and racially exclusive politics do not resonate with South African voters.

Despite a history of dispossession of the majority of South Africans, the country’s racial diversity, the intermingling of interests across races and classes, a complex society and the relatively advanced economy make it difficult for extreme politics to survive. While the old and new political parties fight it out on the fringes of extremism, the ANC remains comfortable at the centre.

Even in instances Zuma and his faction threatened to abandon the party’s non-racialism under the guidance of Bell Pottinger, many ANC supporters remained faithful to the party’s original centrist position of constitutionalism and its policies that favour a mixed economy. This is despite the fact that the party has been woefully incompetent at executing its own ideals and policies.

The EFF, like Cope before it, had a reasonably good run with a debut of 6,35 percent of the vote and 25 seats in the National Assembly – all on the back of anti-Zuma sentiment. It must now convince voters that, absent Zuma, it has a political programme South Africans can support.

Simultaneously, it has to demonstrate internal coherence without suppressing debates and bottling up difference that could spill out through a split. So far, the EFF is seemingly not keen on challenging the ANC at the centre, although it habitually flirts with some of its leaders – probably out of nostalgia.

Now, what of the DA? It has shown consistent growth. From 9,6 percent of the vote and 38 seats in the National Assembly in 1999 when Tony Leon mounted his "fight back" strategy against the ANC, it has grown to 22,2 percent with 89 seats. Current debates within the DA suggest that party leaders are not interested in challenging the ANC at the centre.

Much of the opposition against Mmusi Maimane’s proposal to increase the proportion of blacks in leadership positions of the party is based on the fact that the DA doesn’t want to be like the ANC.

The DA is consumed by battles of how to manage diversity of talent, race and perspectives. The ongoing Patricia de Lille saga and Lindiwe Mazibuko's sudden departure after the 2014 elections are examples of the failure of the party to demonstrate that diverse people – not only in terms of race, but also ideas – can find a political home and leadership roles under one roof.

Without creating an ANC-like broad church that accepts diversity and perspectives, perhaps being better than the ANC at managing the diversity, the DA is far from challenging the ANC at the centre.

In the meantime, the ANC is becoming more experienced at institutionalising its factions and creating rules to manage them. It is unwittingly formalising a two-faction system within a party.

Internal electoral battles within the factional system have drawn national and international attention, second only to the national general elections. That’s a sign of a lonely party, crying out for a challenger.

We live in a world where facts and fiction get blurred
In times of uncertainty you need journalism you can trust. For only R75 per month, you have access to a world of in-depth analyses, investigative journalism, top opinions and a range of features. Journalism strengthens democracy. Invest in the future today.
Subscribe to News24
Related Links
The reasons for the Life Esidimeni tragedy hidden in Moseneke's report
In response to: Institutions showing signs of death - The National Consumer Commission
Land reform can finally bring our 'two nations' together
Next on News24
Mpumelelo Mkhabela | ANC step-aside resolution: The NPA could land up being a political pawn