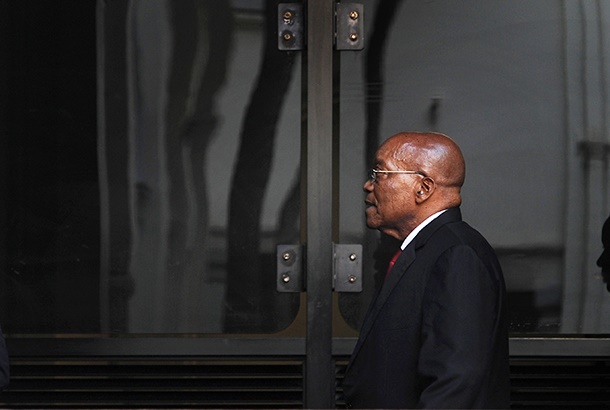 There is no doubt that many people believe Jacob Zuma is incapable of repenting. Will he prove those who think the worst of him right? It is his choice, writes Mpumelelo Mkhabela.

In late January 2018, President Jacob Zuma grudgingly signed a precedent-setting proclamation, giving effect to an investigation into allegations of state capture in which he is assumed to be "accused" Number 1.

This action was unprecedented in the history of presidents and prime ministers. Never before had a head of state signed a proclamation authorising an impartial judicial body to effectively investigate himself or herself.

Had it been a sincere, voluntary act of an innocent leader seeking to frankly subject himself to scrutiny to prove his innocence, the establishment of the inquiry would have been a masterstroke. Zuma would be hailed as the best leader who silenced his critics by opening himself and his acolytes up to independent and public scrutiny.

Alas, Zuma signed the proclamation under duress. Public Protector Thuli Madonsela had investigated allegations of state capture against him, senior government officials, relatives, his friends the Guptas and their associates.

She found evidence of systemic capture, abuse of power and looting requiring further detailed investigation beyond what the office of the Public Protector was capable of. Zuma was hostile to the investigation and refused to cooperate except on his own terms. His recalcitrance wouldn't get anywhere with Madonsela who had a better grasp of the Constitution.

The Madonsela report directed him to set up the wide-ranging inquiry using legal powers vested in the president of the republic. The report set the framework of the probe and prescribed the manner of appointment of the chairperson to guarantee its independence and impartiality.

Zuma challenged this arrangement and unsuccessfully tried to block its implementation. The High Court order endorsing Madonsela's report was like the proverbial gun to the head. Zuma had no choice. Madonsela was vindicated.

Had Zuma succeeded to block the establishment of the inquiry, two things, among others, would have occurred. First, the chests of many witnesses would have remained burdened with horror stories. They would have had no adequate platform to have their evidence heard and tested.

Second, state capture would have been an acceptable norm, thus making nonsense of the entire constitutional democratic order for which many sacrificed their lives and on which many have pinned their hopes for a better life.

Zuma, who experienced the hardship of being in the struggle for the democratic constitutional order which he partly chose to abandon later in his career in favour of state capture, now has to face the commission of inquiry he was forced to establish.

So, what should he do? He has two options at the commission of inquiry. One is to redeem himself and reconnect with his former noble self who fought for the establishment of the constitutional order. This would be the person who would have been honest when he took the presidential oath of office, twice promising to uphold the Constitution and do all in his power to safeguard the republic and fight against all that may harm it.

The fact that he didn't live up to the presidential oath doesn't mean that he can't, after he left office, retrospectively take the opportunity to admit wrongdoing, give the commission full information, and explain how and why he allowed nefarious activities that harmed the republic.

In the process he can earn immunity from prosecution. More importantly, it can help the country to develop better safeguards against state capture in future.

Reconnecting with what is noble would mean Zuma confessing his sins and offering Justice Raymond Zondo unreserved and unconditional assistance to uncover all truths regarding his ruinous years in office.

This will require that Zuma relinquishes his perilous denialism. It can only happen if he has the capacity, however limited as some might think, to undergo a personal revolution in front of the commission.

There will never be a better platform to atone and reconnect with the ideals of the struggle for freedom and the high ethical demands placed on him when he was given the privilege to govern.

There is no doubt that many people believe Zuma is incapable of repenting. Will he prove those who think the worst of him right? It is his choice.

The other option is for Zuma to ruthlessly pursue his long-standing strategy of playing victim, of stalling and denying and peddling conspiracy theories. If he adopts this path, he will earn himself a cruel place in the final report of the inquiry.

He will be exposed for having been dishonest and failing to admit his role on state capture even when the facts were shown to him. This option will distance him even further from the ideals of the struggle for freedom and constitutionalism.

There are signs that he is likely to adopt the second option. From the beginning, he resisted being investigated. In speeches in Parliament, he denied wrongdoing. "The Guptas are my friends. Am I not entitled to have friends," he once said something all along these lines in Parliament, to resounding applause of course.

At political rallies he questioned the existence of state capture. "The state has three arms. Is Parliament and the judiciary captured?" he asked rhetorically at a rally, seemingly blind to the irony of omitting to mention the executive he headed.

His supporters are mobilising for night vigils in an apparent political strategy to bolster what they suspect could be a legal fight he might initiate at the commission. There were signs of this when his lawyers engaged in preliminary head-butting with commission investigators over questions Zuma demanded in advance.

Yet, the case against Zuma at the commission doesn't require political mobilisation and legal obfuscation. It requires deep, personal reflection.

It's entirely up to him to mitigate the harshness of the judge whose name is not Zondo. The judge's name is history.

We live in a world where facts and fiction get blurred
In times of uncertainty you need journalism you can trust. For only R75 per month, you have access to a world of in-depth analyses, investigative journalism, top opinions and a range of features. Journalism strengthens democracy. Invest in the future today.
Subscribe to News24
Related Links
Mkhwebane's daring experiment
South Africa no longer has a public protector
Rise of black and Afrikaner nationalism the result of ANC failures
Next on News24
Mpumelelo Mkhabela | Why Zondo Commission is likely to test ANC's notion of 'collective responsibility'

2 people bag R250k in the Daily Lotto jackpot!
Full list of lottery results
Lockdown For
DAYS
HRS
MINS
Voting Booth
When a Covid-19 vaccine for under 16's becomes available, will you be taking your children to get it?
Please select an option Oops! Something went wrong, please try again later.
Yes, immediately!
38% - 3243 votes
I'll wait to see how others respond
26% - 2225 votes
No, I don't think they need it
36% - 3123 votes
Previous Results
Podcasts
PODCAST | MISSING MATTHEW EPISODE 3: Decades of false starts add to a family's despair