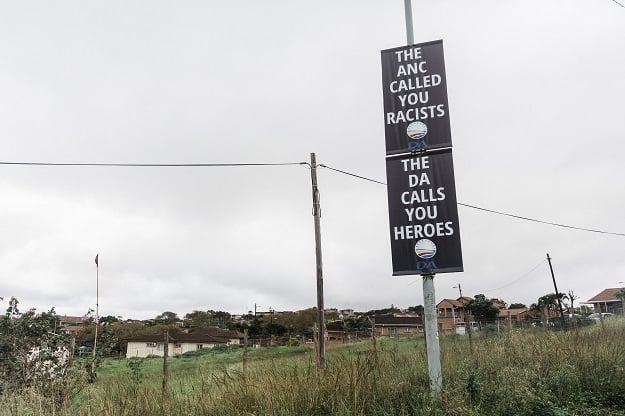 DA posters put up in Phoenix in the lead up to the municipal elections.
RAJESH JANTILAL / AFP

In light of the DA's Phoenix poster debacle, Pieter du Toit questions whether the party's campaign team and leadership didn't discuss the campaign from every angle, and game out what the reaction could be, and whether it was worthwhile to slap those words on telephone poles?

"You cannot be serious!" was the reaction by tennis's original bad boy, John McEnroe, when a line call at the 1981 Wimbledon tournament went against him.

YouTube shows a wiry McEnroe completely losing his cool when the line judge declared his serve out and him advancing to the umpire's chair, disputing the call. "You can't be serious, man," he growls, before exploding with a full-throated roar: "You CANNOT BE SERIOUS!"

Support independent journalism
Subscribe to News24 for just R75 per month to read all our investigative and in-depth journalism. You can cancel any time.
Subscribe
Already a subscriber? Sign in
Next on News24
Pieter du Toit | Get real Mr President, Mkhize's Digital Vibes reflects the true ANC

Lucky Sunday for 3 Daily Lotto players
Full list of lottery results
Lockdown For
DAYS
HRS
MINS
Voting Booth
Children between 12 and 17 can now be vaccinated against Covid-19. As a parent I am:
Please select an option Oops! Something went wrong, please try again later.
Relieved, it's been a long wait to this point
51% - 3145 votes
A bit hesitant, and will wait to see how it goes
21% - 1280 votes
Completely against my child getting the shot
29% - 1800 votes
Previous Results
Podcasts
PODCAST | Ballot Box: An end to 'vat en sit' coalitions and how they will be regulated in the future