#SONA2018: A speech that spoke to everyone 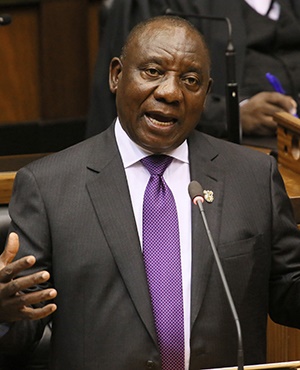 Cyril Ramaphosa's maiden State of the Nation Address (SONA) has broadly been given the nod of approval. It is not often that SONA gets such wide approval – we certainly have not had this experience in South Africa recently.

Ramaphosa's speech was delivered with confidence, inspiring ANC MPs to celebrate with songs afterwards. An interesting thing about Ramaphosa is his ability to talk to everyone. The speech had everything for everyone. This is both interesting and scary at the same time. How is it possible that the president can deliver a speech that eloquently speaks to competing interests?

For example, those who wanted to see government take on corruption were left satisfied by Ramaphosa's emphasis that corruption will be uprooted. The business sector was happy to hear that the president aims to build a new accord on policy matters between business and the ANC.

The Mining Charter, which has caused serious problems between government and mining companies, will be consulted upon, instead of the unilateral approach followed where government threatened to impose the charter without consulting with stakeholders. Ramaphosa promised to reinstate business confidence in South Africa and to attract investors who have been spooked by Zuma's administration.

Those who were edgy about Ramaphosa's commitment to radical economic transformation were assured by the president that his government will be "going ahead" with the ANC policy resolution regarding the expropriation of land without compensation. He stated that government will be "consulting" on how to go about implementing this policy.

For those who still have a soft spot for Jacob Zuma, Ramaphosa paid tribute to the former president and stated the great job he has done for South Africa. For those who thought Zuma was a disaster that Ramaphosa needs to further isolate from the society, he agreed when he stated that South Africa is moving away from the era of disunity, divisions and disillusionment.

Ramaphosa further outlined processes to address youth unemployment, and also plans to address the scourge of corruption within the state-owned entities (SOEs). Something had to be said about the state of entities such as Eskom and SAA. There was also an assurance from the president that the commission of inquiry into state capture will soon commence, to reveal the truth about how state coffers were looted.

The speech was quite balanced - an indication of a president confronted with the difficult task of navigating through competing priorities in a nation that has been battered by the Zuma storm. It promised that he would do things differently while at the same time ensuring some form of continuity.

It's one of those speeches that leaves one with a different impression every time one reads through it. This approach talks to Ramaphosa's tact; balancing conflicting interests and ensuring that a dialogue is always there so that key stakeholders can make concessions to each other. The key to his presidency is to negotiate his way through by striking a balance between competing interests.

I think that the opposition parties in South Africa will have to adapt to this style of leadership, a consensus approach to decision making. Judging by the manner in which they responded to Ramaphosa's speech, opposition parties are yet to figure out how to respond to his style.

Some are saying he is indecisive and tries to satisfy everyone. The appearance of indecisiveness might be a tactical posture here. If a leader secures his or her desired goals while leaving everyone feeling he is indecisive, then that is a strategic leader who leads by way of coordination. In Ramaphosa we are confronted with a strange and interesting approach to leadership.

We live in a world where facts and fiction get blurred
In times of uncertainty you need journalism you can trust. For 14 free days, you can have access to a world of in-depth analyses, investigative journalism, top opinions and a range of features. Journalism strengthens democracy. Invest in the future today. Thereafter you will be billed R75 per month. You can cancel anytime and if you cancel within 14 days you won't be billed.
Subscribe to News24
Related Links
How the ANC bungled Zuma's departure
And the State of the Nation Award goes to...
The poor have survived Day Zero for years
Next on News24
Ralph Mathekga | Creating more bureaucracy to avoid corruption is not ideal