Time to deploy the military in Philippi? 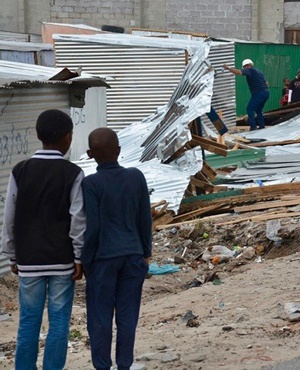 A number of shacks at Xhwithinja, on the corner of Emms Drive and Lansdowne Road, Philippi, Cape Town, were demolished. (Buziwe Nocuze, GroundUp)

The killing of 11 people in the Philippi area in Cape Town last week should get even the most hardened to cringe.

It is unacceptable to lose 11 lives to gun violence in just two nights. Philippi is a small, densely populated strip whose murder rate is so high that it makes the Nyanga area in Cape Town a resinous contender to becoming the murder capital in the country.

Each and every time crime statistics are released, the area’s share of murder paints the entire Western Cape as a crime infested province.

To put it simply, if you remove Philippi and the neighbouring Nyanga area from the map, it will show a drastic decline in murder in the Western Cape, perhaps even nationally. Philippi over represents the Western Cape when it comes to the national murder rate.

When I lived in Cape Town more than ten years ago, it was a well-known fact that Philippi is so violent that it has certain no-go areas at night, with some areas being inaccessible even during the day.

It is no surprise that the informal settlement where more than ten people were shot to death last week is named Marikana. This just shows how the area has cemented its reputation for a killing field, drawing on the Marikana mine shootings that took place in the North West.

So, next time you pass through the award-winning airport, just remember that fifteen minutes’ walk from this national pride takes you to the national shame where murder is at the order of the day, and police are unable to deal with the situation.

Philippi has a reputation for being one of the places where police often get robbed and at times killed when they respond to distress calls from the community. Our big talking police minister Fikile Mbalula has indicated that a task team will be set up to probe Philippi murders.

As the political squabble about who is the boss in policing the Western Cape continues, people are losing their lives and communities are losing hope that the SAPS will ever get things under control.

We need to think differently if we are going to resolve the violence.

I think that the SAPS are not in a position to resolve the problem. This is not because they are being controlled by the ANC and trying to make the DA look bad in the Western Cape, even if they might want to. The SAPS already look bad in the eyes of the province’s communities, and the situation is such that no one can look worse.

I believe there are genuine constraints that the SAPS are dealing with when it comes to policing the province’s gang violence. I also think there is genuine incompetence on the side of the SAPS leadership. Another task team or commission to deal with this issue will therefore not help.

The best way to deal with this matter is to deploy the army to disarm the area. I am a firm believer in the idea that the army should not be deployed to police civilians because this creates a “siege mentality” within communities and instils fear, as one smart observer once noted.

However, circumstances are such that the army should be tactically involved, particularly in manning road blocks and carrying out search and seizure operations, together with the SAPS.

I say this because some of the civil wars or open conflicts involving the use of small arms do not produce as high causalities as we see in violence in Cape Town.

I hear Africa Check verifies this type of claim. Now let us test a claim I want to make by way of observation: Gun violence in Cape Town has killed more people in the last two years than the number of civilians killed by Boko Haram in the same period.

We live in a world where facts and fiction get blurred
In times of uncertainty you need journalism you can trust. For only R75 per month, you have access to a world of in-depth analyses, investigative journalism, top opinions and a range of features. Journalism strengthens democracy. Invest in the future today.
Subscribe to News24
Related Links
Is the Premier League ditching Zuma?
Zuma's new legal strategy is a gamble
Zuma's departure: Smooth transition or grand miscalculation?
Next on News24
Ralph Mathekga | ANC 109th anniversary: A lack of integrity and a broken legacy