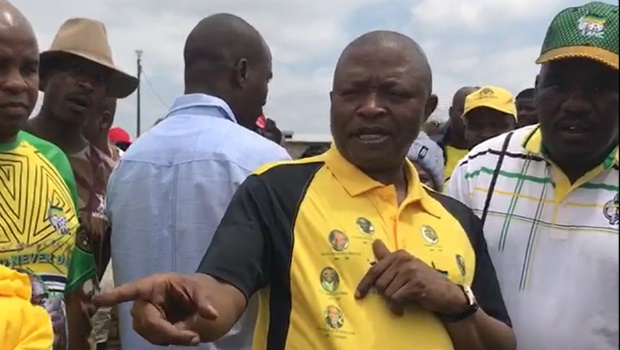 Mabuza was showing that it if comes down to it, he will instigate a mutiny against Ramaphosa resulting in the president becoming increasingly isolated within the ANC, writes Ralph Mathekga.

President Cyril Ramaphosa is between a rock and hard place when it comes to deciding who will be serving in his cabinet. The earlier announcement by the Presidency that he will announce the Cabinet later in the week is a clear indication of intense lobbying that is underway regarding individuals that need to form part of Cabinet.

Even if in principle it remains Ramaphosa's prerogative to decide who will be part of his cabinet, the ANC has traditionally influenced this decision because the party has to have a say when it comes to who will be responsible to implement its political mandate in government.

What is quite interesting about Ramaphosa's situation is that he has been making veiled undertakings that only the individuals who are not compromised will serve in his cabinet. South Africans expect Ramaphosa to stay away from individuals such as ANC deputy president David Mabuza and others who are implicated in corruption.

The traditionally toothless ANC integrity commission has now flagged names such as Mabuza, resulting in the current standstill in the announcement of Cabinet. The irony that is playing out before our eyes is that Mabuza is such a powerful individual that his citing by the integrity commission has made is clear that South Africa cannot easily avoid him. He is a powerful ANC deputy president who has positioned himself as indispensable to Ramaphosa's presidency. Ramaphosa is fully aware that without Mabuza by his side, his presidency is vulnerable and may be cut short.

The problem is that Mabuza's standstill will certainly embolden other ANC members cited by the integrity commission to fight hard for their own inclusion in Cabinet. When Mabuza withdrew from being sworn in as a member of Parliament last week, he knew exactly that there was no practical way in which he could satisfactorily clear his name in time for inauguration as deputy president. The point he was making was clear; the ANC cannot allow a situation where mere allegations of impropriety are used to exclude people from serving in high positions – including Cabinet.

Mabuza was showing that it if comes down to it, he will instigate a mutiny against Ramaphosa resulting in the president becoming increasingly isolated within the ANC.

Even if South Africans may generally approve of Ramaphosa as a credible leader, so long as a significant part of the ANC is not in on this the president will be vulnerable. Therefore, Ramaphosa cannot fully rely on South Africans outside the ANC to protect him in the ANC. It won't work that way.

Mabuza's decisions to confront the integrity commission would certainly send the message that if you fight hard and remain resolute against the allegations of corruption, you can actually make it to Cabinet. If he eventually does make it as the deputy president, it would be difficult for the president to make a case that others who are implicated should be avoided. People will simply ask why Mabuza is allowed whilst allegations against him are more serious than the misdemeanors that the likes of Bathabile Dlamini are confronted with.

Someone like Dlamini might argue that if each individual's closet skeletons were to be weighed, Mabuza's would crash the scale. This would then imply that it's not about the extent to which one is implicated in wrongdoing; it's only about how one has positioned oneself in relation to Ramaphosa.

Quite often in the recent past, Mabuza has made it clear that he is the only pillar of strength of Ramaphosa's presidency. He has explicitly undertaken to protect the president of the ANC. In return for this protection, Mabuza wants full rehabilitation of his image so that he can be ready to take over as the president of the country later.

What does this all say about Ramaphosa's forthcoming cabinet? Clearly it will have to be a compromise Cabinet. There will have to be compromises on Mabuza and Gwede Mantashe, for example. These are two senior ANC leaders who have played a major role in supporting Ramaphosa's project in the ANC. To put it simply, Mantashe and Mabuza are indispensable to Ramaphosa's survival, whilst Mosebenzi Zwane can be politically disposed of.

That will be the criteria that will most likely influence who is retained in Cabinet and who is given the boot.

The type of political calculations that Ramaphosa's ANC will have to make in deciding who is in Cabinet simply does not allow for the emergence of a cabinet made up of creative individuals who could inspire innovation in rolling out government policy. We are not there yet; the only hope is a marginal shift away from corruption as part of the broader shift towards clean government.

Since we have been in trouble regarding corruption, clean government may be a good principle upon which to start. However, a corruption free government is not necessarily an innovation in tackling major policy concerns in society. We should remember that as a nation, we are still dealing with the bare basics of governance here. We are yet to tackle major issues that require innovative thinking and approach towards policy. Looking at the debates we are having about Cabinet, we are still far from finding meaningful solutions to our problems.

We live in a world where facts and fiction get blurred
In times of uncertainty you need journalism you can trust. For only R75 per month, you have access to a world of in-depth analyses, investigative journalism, top opinions and a range of features. Journalism strengthens democracy. Invest in the future today.
Subscribe to News24
Related Links
Ramaphosa has a Mabuza problem and he needs to deal with it fast
Mabuza meets with ANC integrity commission ahead of Ramaphosa's decision on cabinet - reports
'The dogs of war are ready' - Faction of ANC NEC says it's time to take action against Magashule
Next on News24
Ralph Mathekga | Election 2021: An anxiety-inducing affair for the ANC