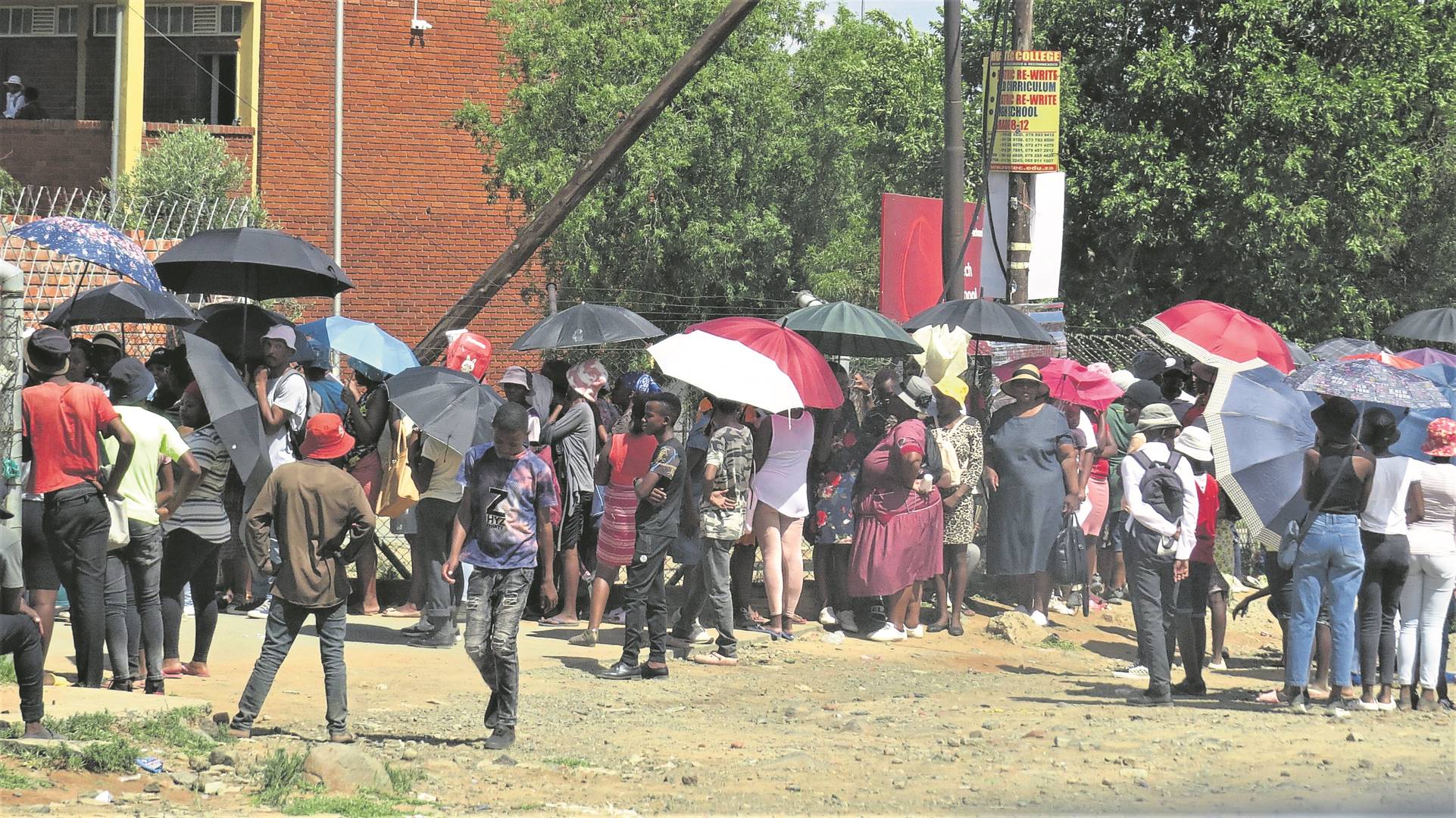 Parents and guardians of unplaced learners stand in a snaking queue outside the Commtech Comprehensive School in Phelindaba, Bloemfontein, at the start of the school term on Wednesday (11/01). Photo: Teboho Setena

The Free State Department of Education laments the disarray due to the culture of late registration of learners, resulting in a loss of teaching time and placed learners at the start of every academic year.

This hampered the beginning of the first academic term of 2023 in the province on Wednesday (11/01).

Confusion relating to the placement of mainly Gr. 8 learners resurfaced despite a clarion call directed at parents to apply on time.

Challenges were experienced in the Motheo and Lejwelepu­tswa districts. According to the department, the other three districts in the province – Xhariep, Thabo Mofutsanyana and Fezile Dabi – had all learners placed in both Gr. 1 and Gr. 8.

Tate Makgoe, Free State MEC for Education, said the placement of learners being hampered by late application remained the biggest challenge at the start of a school term.

“Many applications were received on Wednesday. Our challenge remains Gr. 8, which will be resolved by the end of January,” said Makgoe.

Bloemfontein and Welkom were mostly affected, according to the department. The reasons for late placement varied from parents moving, to language choice offered by high schools coming into play – particularly in the Bloemfontein township.

Some parents who applied for placement last year blamed a lack of communication by schools. Sam Maja, who resides at Phomolong in Bloemfontein said by Monday, 8 January, he had not received confirmation of placement of his child who is set to start Gr. 8. His child was finally accepted at the Commtech Comprehensive Secondary School in Phelindaba.

“I was compelled to come in person to verify that my child had been placed, having already paid the registration fee upon applying last year,” said Maja.

Scores of parents and guardians of unplaced Gr. 8 learners desperately stood in a snaking queue at Commtech on Wednesday (11/01). Up at dawn, they queued for hours in the blistering heat, desperate to secure placement. They came from far-flung settlements where there are no secondary schools. These areas include Phomolong, Caleb Motshabi, Phase 3, 4, 5, 6, 7 and 9, Grasslands, Peter Swart and Bergman Square.

“Grassland Secondary is the nearest to where I stay in Phase 9, but it was too full to take Gr. 8, hence my application at Commtech. There are few primary schools nearby and I believe it is high time the department considers building at least two secondary schools to avoid the plight of learners travelling and walking hours to secondary schools mostly in Rocklands,” said Eunice Gomba, a parent from Grassland.

We live in a world where facts and fiction get blurred
In times of uncertainty you need journalism you can trust. For 14 free days, you can have access to a world of in-depth analyses, investigative journalism, top opinions and a range of features. Journalism strengthens democracy. Invest in the future today. Thereafter you will be billed R75 per month. You can cancel anytime and if you cancel within 14 days you won't be billed.
Subscribe to News24
Next on News24
Female roles progress, shift