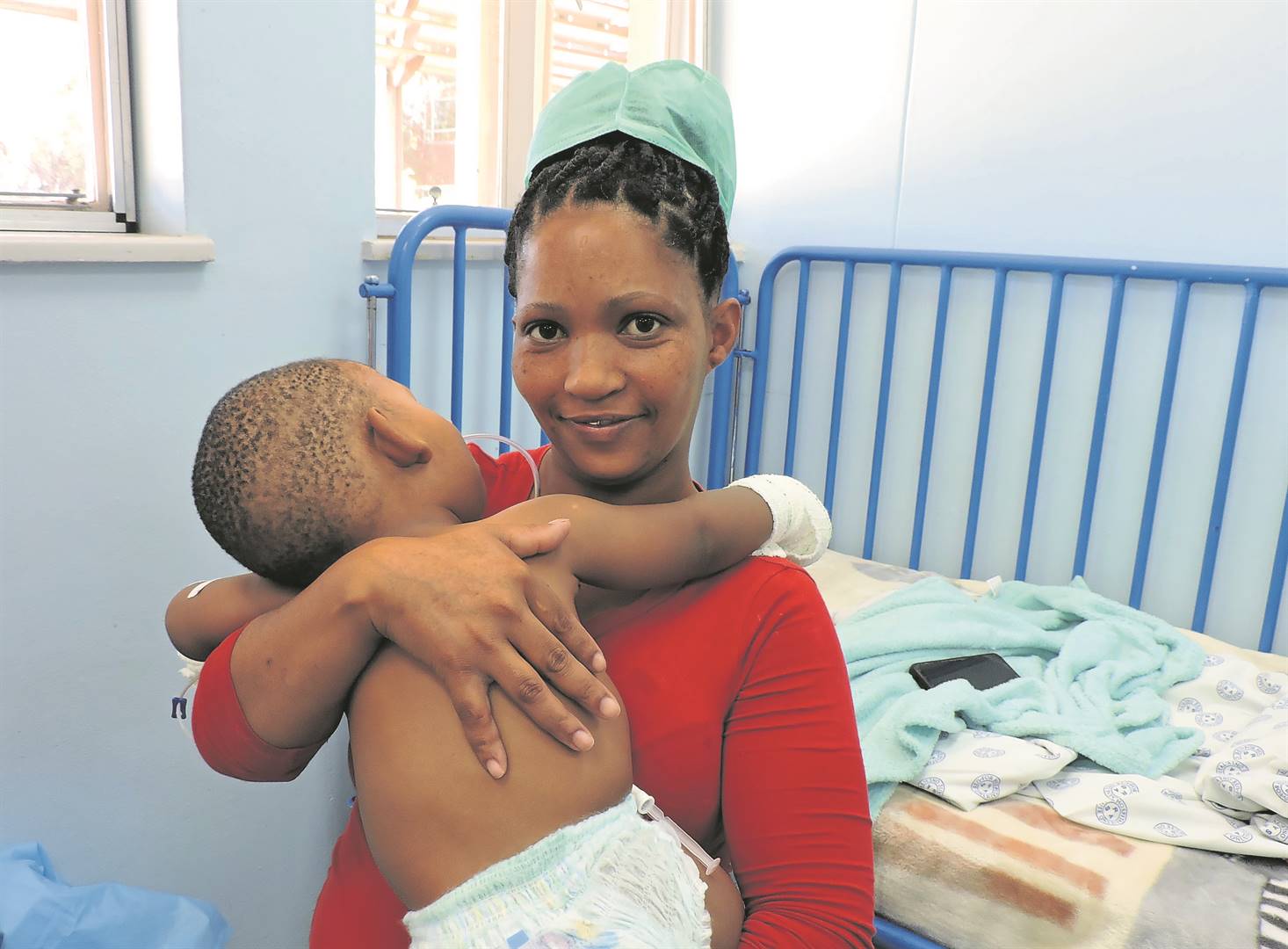 Charlene van Rooyen with ten-month-old Jay-Jarred on Thursday (24/11). They are from Kuruman. Last week, a total of 23 young children from the Northern Cape underwent life-changing surgery during another Smile Week at the burns unit of the Robert Mangaliso Sobukwe Hospital (RMSH) in Kimberley.

Having taken place for the seventh year at RMSH, and biannually since 2019, Smile Week entails a full working week in which surgeons, surgical teams, other medical professionals and hospital staff perform reconstructive surgery on children suffering from physical anomalies and the related emotional pain.

Smile Weeks are hosted all over the country, coordinated by the Smile Foundation.

Mojalefa Jonas from Kimberley was born with a cleft palate and a cleft lip. His mother, Millicent, says she was able to make peace with this after a consultation at the RMSH Burns Unit, as the condition was explained to her and confirmation given that it was repairable – and that this could be done with the support of the Smile Foundation. Last week Mojalefa had his cleft lip repaired. His palate will be repaired when he is a year old.

Charlene van Rooyen from Kuruman brought her son, Jay-Jarred, for his cleft palate to be repaired. His cleft lip was repaired during an operation in March.

Children assisted through Smile Week are not only those born with the conditions they suffer from. In 2020, when a pot with boiling hot water fell, Lundanele Daweti sustained serious burns to various parts of her body. She was a year and three months old at the time.

Seeking medical treatment for her child, she heard about the Smile Foundation. Lundanele has had several consultations and has undergone operations at the RMSH Burns Unit.

Last week she underwent corrective surgery to her one arm, to be able to straighten it and bend the fingers of her hand – in her case the severe burn wounds lead to contractures of the skin, which prevent movement.

This Smile Week was hosted at the burns unit that has also been undergoing a transfor­mation. Spearheading the revamp, currently in its third and final phase, is head of the RMSH Department of Plastic and Reconstructive Surgery and Burns, Dr Maria Giaquinto-Cilliers. To be able to meet more needs involving the treatment of burns in children from the area, Giaquinto-Cilliers, through collaboration with the Smile Foundation, has played an integral part in giving children a sanctuary for healing.

As always, she is full of praise for each one who plays a role at the burns unit – from doctors and nurses, to cleaners and porters.

“A child living with a physical anomaly does not only experience functional difficulties; they carry the emotional pain of being seen as odd by others, which causes them to feel excluded from the world,” says Kim Robertson-Smith, chief executive officer of the Smile Foundation.

“The Smile Foundation continues to strive to offer every child the chance to overcome their difficulties due to disfigurement, to feel included and to enjoy their younger years.”

We live in a world where facts and fiction get blurred
In times of uncertainty you need journalism you can trust. For 14 free days, you can have access to a world of in-depth analyses, investigative journalism, top opinions and a range of features. Journalism strengthens democracy. Invest in the future today. Thereafter you will be billed R75 per month. You can cancel anytime and if you cancel within 14 days you won't be billed.
Subscribe to News24
Next on News24
Train tourism needs council support