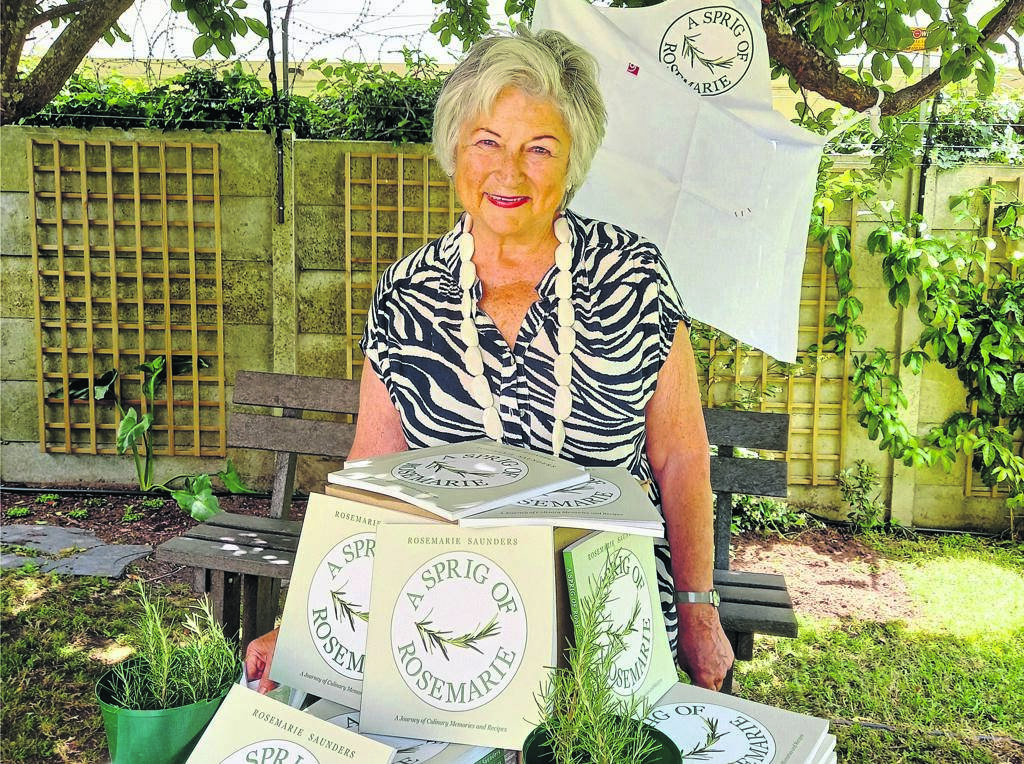 Rosemarie Saunders at the launch of her cookery book, A Sprig of Rosemarie, at the Herb Garden at Ashbourne Apartments in Kenilworth on Wednesday 1 December.

While executive caterer Rosemarie Saunders may refer to herself as the “hired help” it is her discretion that landed her in the most glamorous of circumstances when catering, teaching and travelling.

That discretion is evident as you page through A Sprig of Rosemarie, a legacy cookery book where names aren’t dropped, but anecdotes derived from dinners, events and parties, from Cape Town to Monaco and beyond, conjure up a feast of fun, hard work and food to die for.

Described as “an unusual cookery and story book”,

A Sprig of Rosemarie was launched at The Herb Garden at Ashbourne Apartments in Kenilworth on Wednesday 1 December.

Born in Britain, Saunders comes from a family of restaurateurs and learnt at an early age about the importance of fresh ingredients, being thrifty and the value of people and money.

She attended Hotel and Catering School in Birmingham, followed by a teaching qualification while working in London.

Stopping off in South Africa in the early 1970s on her way to Australia, the lure of the Cape kept her here and she worked at 5-star hotels such as the Mount Nelson in Cape Town and the Beacon Island Hotel in Plettenberg Bay, before joining Woolworths head office as catering manageress. She later became a food selector.

Leaving the corporate world to start her family, her love of food prompted her to start giving cookery lessons from her home kitchen, but an unexpected phone call launched her into a catering career.

This grew into a catering business, event management, food and wine tours to France, cookery books, food supplies to farm stalls and contracts to cater and teach in foreign parts of the world. She has entertained and catered to the rich, famous, (and sometimes infamous) from her homes in France and Cape Town.

Today she resides in Kenilworth.

A Sprig of Rosemarie embodies a collection of her recipes, including those Saunders developed with her schools Cuisine Marie Rose and The Provençal Kitchen Rosemarie, such as Salade Nicoise, Nougat Ice Cream, and Jonah’s Gingers.

Chef, wine afficionado and food commentator Michael Olivier writes a warm foreword, calling her “this Phoenix risen from the ashes.

“She’s proof that big things come in small parcels and she is bright and chirpy like a little bird, and is desperately in love with anything food.”

She’s phoenix-like because when her business was burnt down she made a plan and none of her booked clients were disappointed – the show went on.

Making a plan is her mantra, from prepping in hangars, restoring power or ducking under garden sprinklers, Formula One races to skydiving Santas, Saunders has seen it all.

We live in a world where facts and fiction get blurred
In times of uncertainty you need journalism you can trust. For 14 free days, you can have access to a world of in-depth analyses, investigative journalism, top opinions and a range of features. Journalism strengthens democracy. Invest in the future today. Thereafter you will be billed R75 per month. You can cancel anytime and if you cancel within 14 days you won't be billed.
Subscribe to News24
Next on News24
Outcry as community mourns the tragic killing of a cyclist in Muizenberg