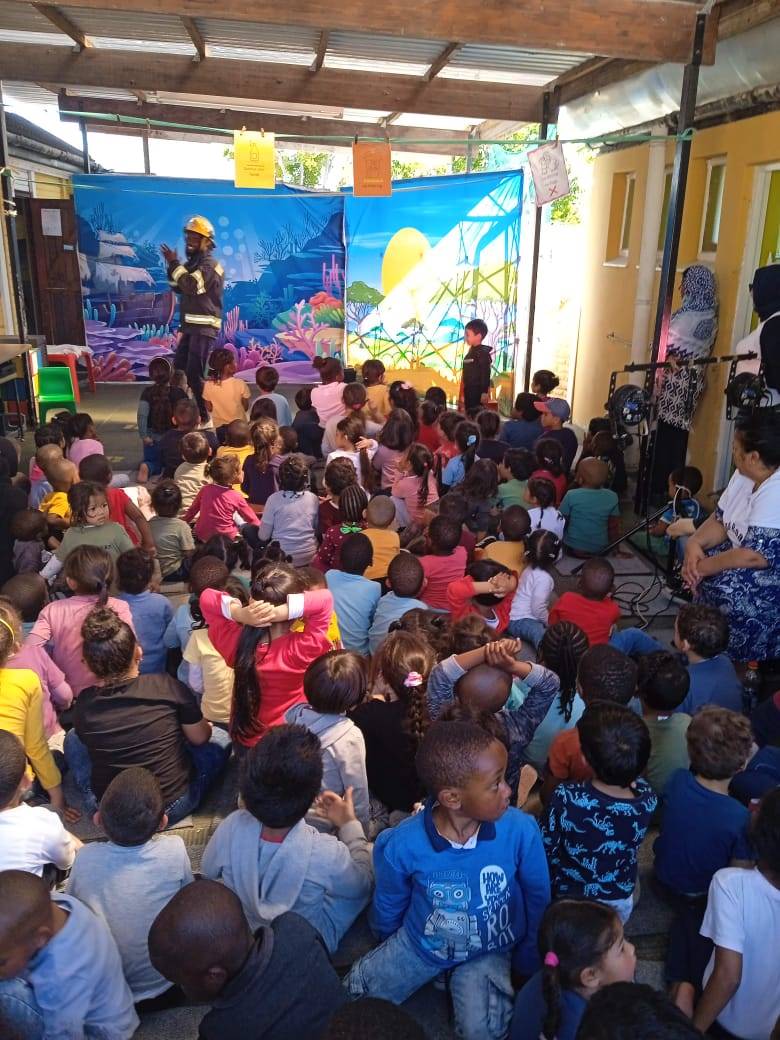 High schools in the Western Cape will benefit from the live performances of the Bridgetown Theatre Company (BTC) when they perform free live theatre productions of the six matric set-work books – Hamlet, Life of Pi, Fiela se Kind, My Children My Africa, Krismis van Map Jacobs and Inzalo.

The BTC also has live performances at early childhood development centres (ECDs) and Jumpstart Pre-School in Kenwyn had the first performance on Wednesday 21 September.

This show runs until Wednesday 30 November.

“The live performances Our Voices Count at early childhood development centres is free and ECDs and pre-schools are welcome to contact us for the performances at their institutions. We guarantee fantastic music, dance, costumes and comedy at its spellbinding best. This was the show that we performed at Jumpstart Pre-School in Kenwyn. The show Our Voices Count is a fun-loving, interactive, educational and enjoyable show, not to be missed,” says Vernon Piedt, chair of the BTC.

Manners, obedience and respect, safety and nutrition were the messages related in the production.

The show was opened by Mark Kleinschmidt, Ward 60 councillor, who attended the show with the children from the different informal settlements in and around Athlone.

Topics they cover in the show include my family, my home, fruit and vegetables, good manners, me, I am special, people who help us and their occupation, child safety, extreme weather (summer, autumn), clothes we wear, colours, shapes and Easter.

“The theatre style is fast paced and engaging by utilising acting, rap, current music and dances children between the ages one and six years. The continuous story is told through superheroes, essential workers and fairy tale characters and the duration of the show is 40 minutes. The show is in the language of choice, in English, Afrikaans or IsiXhosa,” says Piedt.

On Friday 9 December the BTC will be 12 years in existence and will be performing several of their popular and new theatre productions.

“Throughout the 12 years we always presented original theatre productions for the people by the people. In order to achieve this we asked ourselves ‘what stories are we telling? Whom are we telling the stories to? How relevant are these stories’? In doing so we are humbled by the artistic success we have attained,” he says.

Piedt also thanked all their loyal supporters and the people of the Western Cape.

“We could not have achieved the artistic success without you. It is through the loyal audience’s unconditional support that we are operational. For this, we will always be eternally grateful. Our performers have always used our theatre productions to practise their craft at the highest level by putting themselves in physical and emotional positions that may never arise in their own lives.

“Our current group of talented performers are Alfonzo Freemantle, Andrea Wildschut, Anthea Juries, Cohen Erasmus, Emihle Bhoto, Josy Matthews, Monique Asemaphale, Ryan Brown, Shane Davids, Sibusiso Zwele, Tamsyn Pretorius, Thembalethu Zwele, Thamsanqa Dywili, Tammy Isaacs, Umir Morris and Yasser Barnes. They are testimony to the fact that our theatre productions keep youth off the streets and occupies them with cultural topics and artistic self-expression. In so doing, they are the positive change in others and their own lives. Through this humane gesture it is proven that theatre has the power to promote social discourse and foster societal change. Long may it continue,” Piedt says.

We live in a world where facts and fiction get blurred
In times of uncertainty you need journalism you can trust. For 14 free days, you can have access to a world of in-depth analyses, investigative journalism, top opinions and a range of features. Journalism strengthens democracy. Invest in the future today. Thereafter you will be billed R75 per month. You can cancel anytime and if you cancel within 14 days you won't be billed.
Subscribe to News24
Related Links
Play brings LGBTQ+ awareness to the city
Free theatre for prescribed books
Next on News24
Hollywoodbets raise the stake with Kaapse Klopse Karnival Association