On the hustings: Tony Leon talks crooks and charlatans, CR's decency and the DA's warts

It's been a grim old election campaign, Tony Leon told Pieter du Toit before the DA deployed their former leader to a series of campaign events. And although he thinks President Cyril Ramaphosa is a "decent sort of a guy" he doesn't believe the ANC can redeem itself.

Founding DA leader Tony Leon is back on the campaign trail, a decade after he resigned the leadership of the official opposition and handed over the reins to Helen Zille. And he's not impressed by the quality of what passes as political debate in this country.

"The election campaign has been very dispiriting and almost entirely devoid of any content, certainly on the ANC's side. The only offering they have is Cyril Ramaphosa… still quite a potent offer… but strip him away and you have this very ugly undergrowth of crooks, criminals, charlatans and chancers on their lists.

"And you have a president who is not in charge of his party – one hopes he's in charge of the country – and you have cascading series of crises. Look at Eskom… we now need a bailout on the bailout!" he said on Tuesday before being dispatched by the DA's election machinery to a series of events.

"It's my national duty to come and help out!" he tells me in the party's national headquarters in Bruma, Johannesburg. 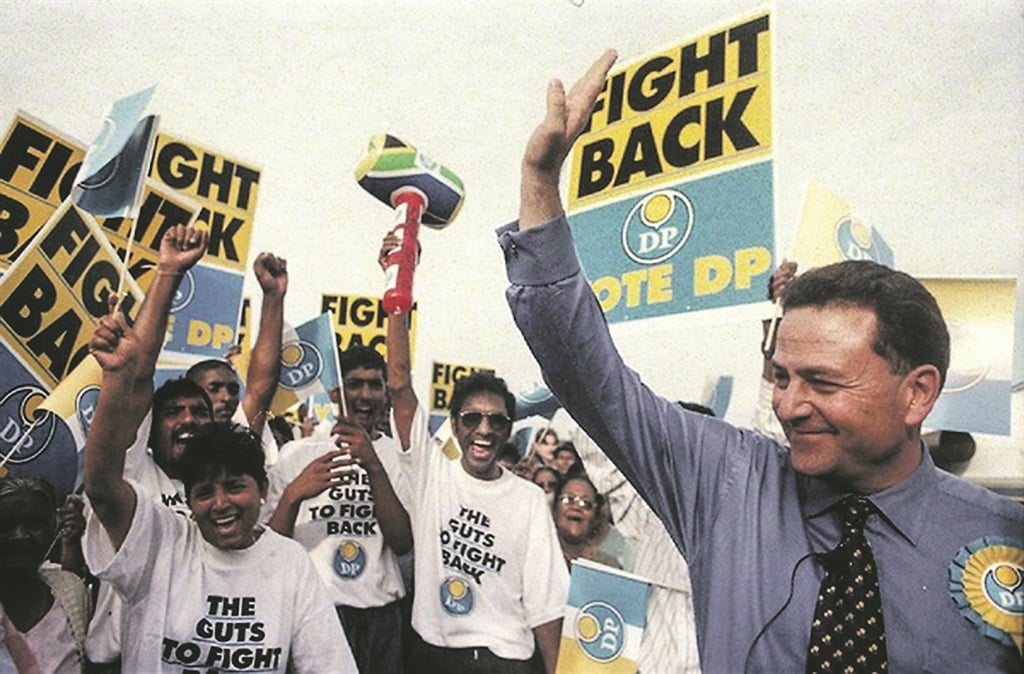 There are few more experienced campaigners and operators alive in South African politics than Leon, who cut his teeth in student politics at the University of the Witwatersrand and proceeded to challenge the then almighty National Party in the 1980s, first as member of the Progressive Federal Party and later as MP representing its successor, the DP.

And judging by his stump speech, Leon is relishing the opportunity for a cameo appearance in the 2019 election.

Leon, who has seen the ANC transition from banned organisation to negotiating partner and ultimately to governing party, believes the ANC is in its worst state ever.

"I'm friendly with Tito Mboweni so I do have regard for him, and he told a profound truth the other day when he said you can't do anything about it because of ANC politics. We borrow R1,2bn every day and R1bn of that is spent on interest… it's unsustainable. When I was in Parliament the national debt under Trevor Manuel's stewardship was 22% of GDP. It's now 60% and exponentially rising. We can't carry on like this. We are literally standing on the edge of a cliff."

A sign of how bad things have become, Leon says, is the ever-louder grumblings from the normally quiet and reserved South African Reserve Bank. "They're now speaking out, on everything from load shedding to our unsustainable levels of debt. I mention it because the only way to introduce a menu of reform is to confront those who are blocking it."

"It's very simple: you vote for Cyril… a very competent, sort of decent guy… or you vote for that: the obstruction of reform. But you simply don't know. The DA – warts and all – at least stands up for most of the items on that reform menu that can rescue this country."

Leon's own party isn't without its faults – and he cites the Patricia de Lille affair and an oft muddled election message as two drawbacks – but says the scoreboard tells a vastly different tale of the DA than it does of the ANC. "That's why you get people… Helen called them refugees… streaming into the Western Cape," he says, grinning at Zille's infamous remark.

"But there's this extraordinary statistic that something like 77% of net jobs created… admittedly it's a tiny amount given the levels of unemployment in the country… were created in the Western Cape. And they (the DA) hate it when I tell them this, but no party can put a job in every home, but they sure as hell can get out of the way of business so they can do that." 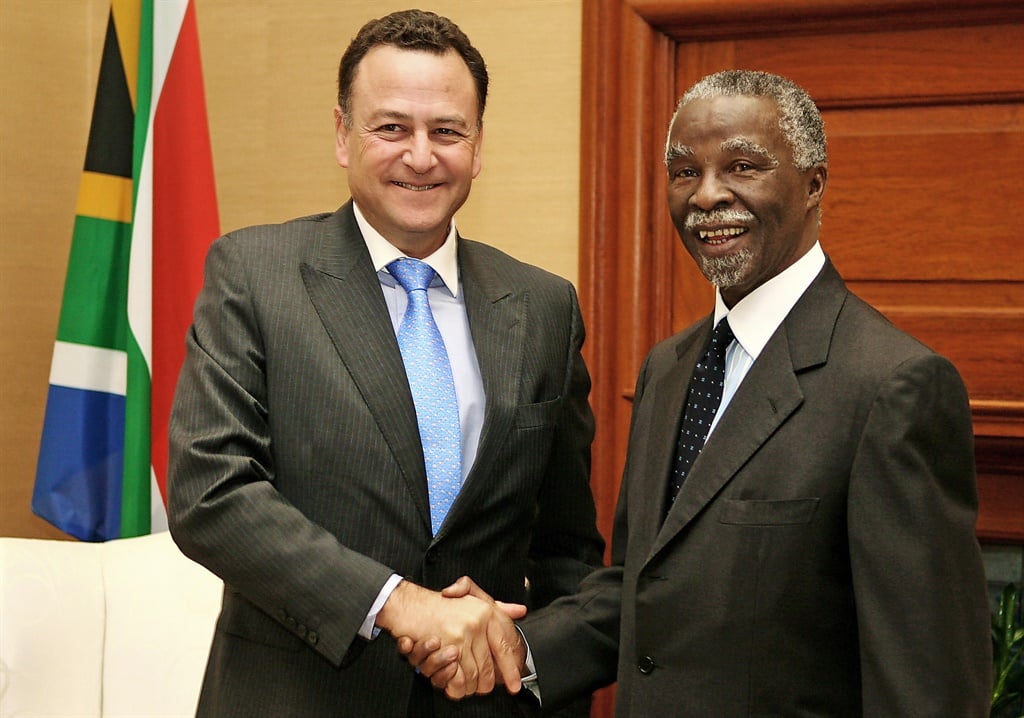 A good example of government getting in the way of business and job creation is the mining industry, where investment has drastically fallen.

"God knows, Ramaphosa is better than (former president Jacob) Zuma and even (Gwede) Mantashe (minister of mineral resources) on a bad day is better than (Mosebenzi) Zwane (former minister of mineral resources) on a good day… that's a given. But if you look at the haemorrhaging of mining talent and production… we still have some of the richest deposits of gold, chromium and platinum in the world but we're one of the least mined."

But back to the DA.

Leon, on the hustings for the party he helped build, has some good words for its leader Mmusi Maimane and what has transpired since he left the torchbearers of liberal politics in the country.

The way in which the party managed the De Lille blowout was however clumsy. He says he once fired a mayor of Cape Town, but it took him one month, while the DA battled through 18 months of litigation.

Who was the mayor again?

Leon explodes in laughter: "Peter Marais! Reincarnated as a Freedom Fronter and taking my old slogan of 'Hit back!' Now at his seventh party! Isn't that fantastic? Isn't life fantastic? The Freedom Front Plus borrowing my discredited mayor and my discarded slogan!"

He's positive about his party, even though anecdotal evidence suggests some of its traditional white voters may not support it this time around.

Reminder to @Our_DA & all their supportors: even your own Tony Leon admits that Cde Pres Ramaphosa is a positive "game changer" for our country and the DA must get behind him. Listen to your marketing leader! #GrowSouthAfrica https://t.co/M66PZcZsSf pic.twitter.com/XZTpHp6viY

"The DA have been accused of not having a sharp enough message or a mixed message, and that might be true, but my wife said the other day: If you had to call someone at two o'clock in the morning during a crisis, you're going to call the DA, not the ANC. There's a better chance they'll do something.

"You have to ask: 'How can I most effectively register my outrage at having been robbed blind, at the hideously large tax bill I've got, at the looting, corruption, state capture, deinstitutionalisation, deindustrialistion and also support a broad reform agenda?' If that is the test, the DA has a compelling message," he says.

Leon got to know Ramaphosa well during the constitutional negotiations and clearly has high regard for the president's abilities and commitment to good governance. But it's also clear that he believes the head of state to be constrained by his party to do the right thing. "He might, but he certainly has been awfully quiet. Will he, won't he?"

Even at the iciest stage of his famously frosty relationship with Mbeki there was more debate and dialogue about policy issues than there is now. "You could argue it was a different time and that the country was on a better path to financial and economic sustainability… there was a contest of ideas. Now political debate has become a name-calling racket. It's just terrible."

We live in a world where facts and fiction get blurred
In times of uncertainty you need journalism you can trust. For only R75 per month, you have access to a world of in-depth analyses, investigative journalism, top opinions and a range of features. Journalism strengthens democracy. Invest in the future today.
Subscribe to News24
Related Links
Elections the perfect place to punish the ANC, says DA's Tony Leon
Drafters of Constitution were a little 'starry-eyed'
Upcoming elections most important since 1994 - Tony Leon
Next on News24
Dawie Scholtz: How the ANC (narrowly) held Gauteng