Lindiwe Dim wants to be part of the recycling solution SPONSORED: As the host of the PETCO “Message in a Bottle” online documentary series, the actress met several exceptional women who are making their mark in the recycling industry. Here she recounts how the experience has inspired her:

“Recently, I took part in an incredible project where I got to travel around our beautiful country and talk to some of the most inspiring entrepreneurs and innovators I have ever met.

I was working with PETCO – a non-profit organisation that specialises in making sure that PET (polyethylene perephthalate) plastic bottles in South Africa are collected and recycled – on a documentary series called “Message in a Bottle”.

PET forms the basis for synthetic fibres like polyester and is commonly used to produce rigid plastic packaging items – like bottles for carbonated soft drinks, tubs and trays for food items – and sheet and film for general packaging.

The annual PETCO Awards celebrate and recognise the innovations and achievements of organisations and individuals who are making a positive difference in the recycling and waste management space.

The documentary project came about after the winners of these awards were announced, and it tells the stories of the nine 2022 winners across the recycling value chain. 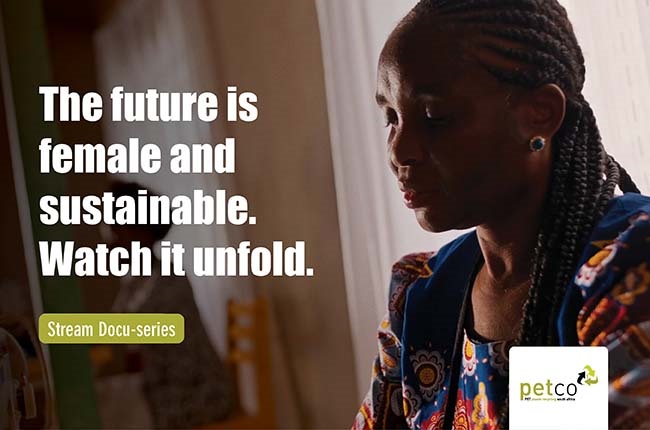 I have always had an interest in this field and in the environment. I am a bit of a science nerd and studied environmental science and geography, with natural sciences being a key part of this. But even though I know a fair bit about the recycling industry and how it works, I was still amazed to see these stories of hope and inspiration in real life.

What struck me most was the number of astonishing women taking the lead in this field, which has traditionally been dominated by men.

One such example is Sue Benningfield from the non-profit company Litter4tokens NPC in Ballito, KwaZulu-Natal. The company was founded to tackle the challenges of litter, unemployment and lack of food security, with six operational kiosks across three provinces. These kiosks employ 27 people and provide food and extra income for 1 260 self-employed waste collectors who can exchange their waste for tokens to redeem food, clothing and household staples. To date, over 133 000 people have been fed, including 12 000 school children, and more than 640 000 bags of litter have been prevented from reaching the ocean.

I was also inspired by Londiwe Mbuyisa, the founder of Isphepho Enviro Ambassadors. Based in Umlazi, Durban, her company employs 31 staff, the majority of whom are graduates from universities in the region. She is an incredible force who has worked hard to build her business, which facilitates a large schools’ recycling education programme and serves as a recycling buy-back centre for the local community and surrounding areas. She also facilitates recycling workshops and teaches kids about the importance of recycling. Last year, this business collected over 100 tonnes of PET, 30 tonnes of paper and 20 tonnes of cardboard.

Most impressive was Refiloe Ramadikela from Hendrina Recycling, a buy-back centres that is part of the Zonda Insila Programme in Mpumalanga.

I loved the tenacity she showed in running this centre. When she struggled to find work after graduating from university, she researched online how recycling works and realised that she could build a business that not only made her money but also create wealth and income for her community. The Zonda Insila Programme is co-ordinated by another incredible woman, Linah Duduzile Ndala, and it collects waste from households, clears illegal dumping sites and litter and separates residuals from recyclables. They then package the recyclables according to recyclers’ specifications to generate an income for the project’s participants. The operation has grown to 14 projects in four towns, and last year collected over eight tonnes of PET.

All these women, and the rest of the people I met, brought home to me how important it is to educate people and share the message of how vital recycling is. It’s not just about creating a cleaner and better planet for us and our children. It’s also about understanding that we can be innovative and creative in finding solutions and creating jobs.

I have always loved the statement that “necessity is the mother of invention” and this project has highlighted just how true this is.

As for me, having seen how some of these women have built projects that are so impactful, I have been inspired to think about what I can do next. So, don’t be surprised if one day I open a buy-back centre in my home village in Limpopo.

After all, we need to be the change we want to see in the world.”

To learn more about these initiatives, as well as the other award-winners, watch Message in a Bottle.

We live in a world where facts and fiction get blurred
In times of uncertainty you need journalism you can trust. For 14 free days, you can have access to a world of in-depth analyses, investigative journalism, top opinions and a range of features. Journalism strengthens democracy. Invest in the future today. Thereafter you will be billed R75 per month. You can cancel anytime and if you cancel within 14 days you won't be billed.
Subscribe to News24
Next on News24
Winners announced for the 2022 Santam Women of the Future Awards in association with Fairlady and Truelove