Feb. 10, 1985, Nelson Mandela's daughter Zindzi read a letter written by her father during his incarceration to a crowd of his supporters at Jabulani Stadium in Johannesburg. "Your freedom and mine cannot be separated," he wrote, explaining why he was rejecting an offer for his conditional release from prison.. (Photo by Gallo Images / Rapport archives)

South Africa's ambassador to Denmark, Zindiswa "Zindzi" Mandela, the youngest daughter of the late president Nelson Mandela and Winnie Madikizela-Mandela, died at a Johannesburg hospital on Monday morning. She was 59.

Mandela will be remembered for her rousing address at a gathering in Soweto in 1985 where she read out her father's rejection letter of then president PW Botha's offer of release on the condition that he renounces violence.

She was also a prominent figure in South Africa's post-apartheid democracy where she served as stand-in First Lady of South Africa from 1996 to 1998 until her father remarried, and later served as an ambassador for the country.

Minister of International and Cooperation Naledi Pandor said: "Zindzi will not only be remembered as a daughter of our struggle heroes, Tata Nelson and Mama Winnie Mandela, but as a struggle heroine in her own right. She served South Africa well." The President of South Africa, with his daughter Zindzi Mandela-Hlongwane (Photo by P/F/H/ullstein bild via Getty Images)

On 10 February 1985, a 24-year-old Mandela took the stage at a mass gathering in Soweto where she read a letter from her father whose words at that time had not been allowed to be legally broadcast for over 20 years.

"The prison authorities attempted to stop this statement being made, but he would have none of this and made it clear that he would make a statement to you the people," Mandela said as she started her address to a cheering crowd.

"Strangers like Betham from England, and professor Dash from the United States have in recent weeks been authorised by Pretoria to see my father without restriction, yet Pretoria cannot allow you the people to hear what he has to say directly."

"He should be here himself to tell you what he thinks of this statement by Botha. He is not allowed to do so. My mother who also heard his words is also not allowed to speak to you today."

In his letter, Nelson thanked the United Democratic Front (UDF) for their battle against apartheid, congratulated Archbishop Desmond Tutu on his Nobel Peace Prize, adding that the prize belonged to all the people, and his rejection of Botha's release offering.

"I am surprised by the conditions that the government wants to impose on me. I am not a violent man. It was only when all forms of resistance were no longer open to us that we turned to the armed struggle," Nelson's letter read. Mandela was born on 23 December 1960, the same year the African National Congress launched its military wing Umkhonto we Sizwe to topple the apartheid regime.

In his autobiography Long Walk to Freedom, Nelson wrote that Zindzi was named after the daughter of the Xhosa poet Samuel Mqhayi he admired who, when he first saw his daughter, said "u Zindile" which means "You are well established". Zindiswa is the female version of what Mqhayi said.

Shortly after her birth, Nelson went into hiding under the name of David at Liliesleaf farm in Rivonia, Johannesburg, and Winne would bring her and her sister Zenzani to visit him, but these visits became fewer as the apartheid police became more vigilant.

By the time she was 18 months old, her father was sent to prison and he would only be released again in 1990 - 27 years later.

Growing up, she was often left in the care of her older sister Zenani when her mother Winnie was sent to prison for her continued opposition to apartheid.

Both Zindzi and Zenani were sent to an Indian school, against apartheid regulations, to receive a good education, but when authorities opposed it, their parents sent them to boarding school in Swaziland.

Nelson wrote that he was concerned about sending them to Swaziland as Winne found her "greatest support" in them, and would, therefore, be left alone. 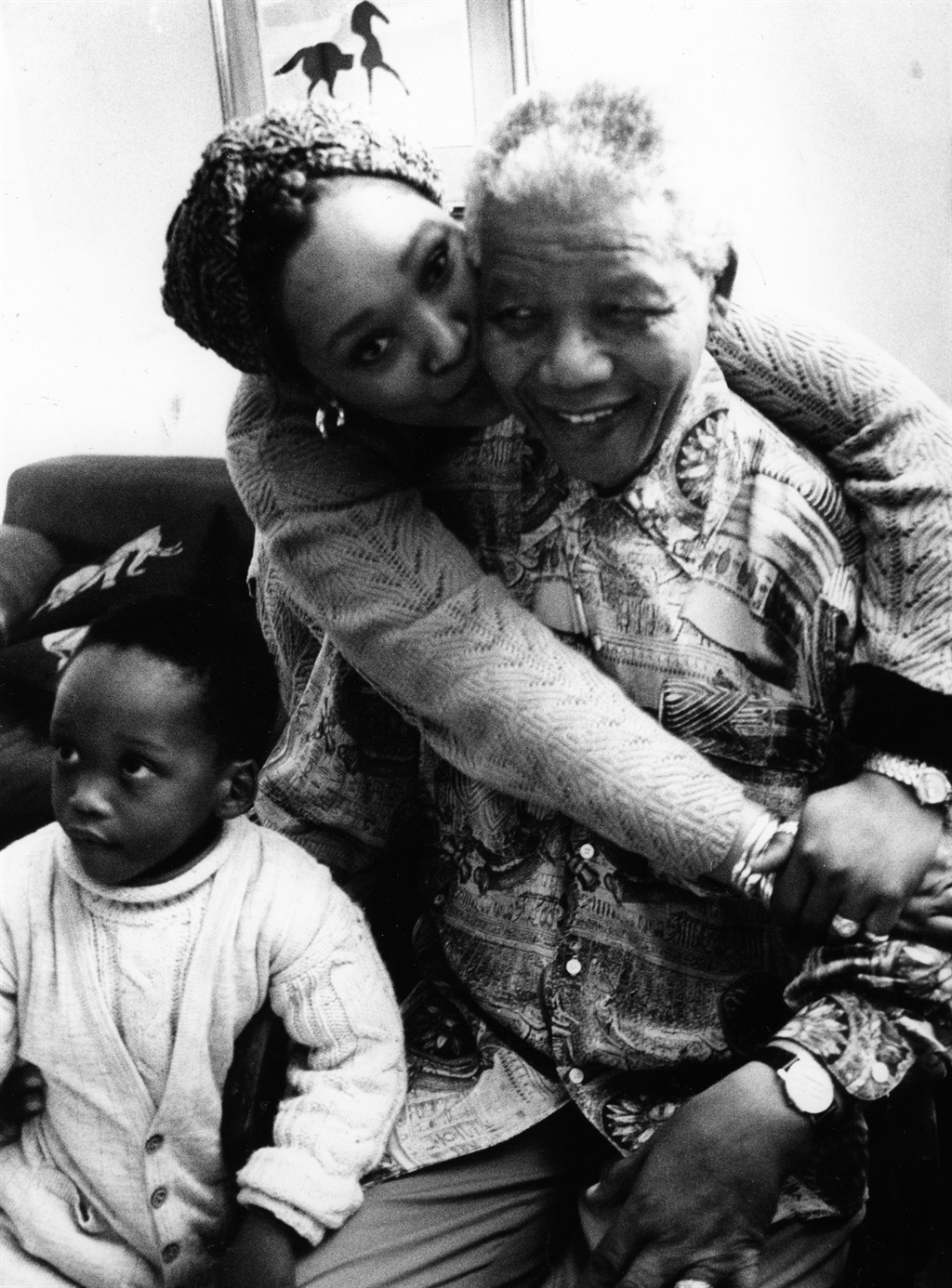 Nelson Mandela with daughter Zindzi Mandela Hlongwane at his birthday party in 1995. (Photo by Gallo Images via Getty Images/Avusa) In 1975, plans were made for 15-year-old Zindzi to see her father for the first time since she was three, by falsifying her birth documents to indicate that she was 16 and could therefore legally visit prisoners.

"She was a daughter who knew her father from old photographs rather than memory," Nelson wrote in his autobiography.

"Somewhere deep inside she must have harboured resentment and anger for a father who was absent during her childhood and adolescence."

When Zindzi finally saw her father in prison, Nelson said: "Through the glass, I could see her holding back her tears as I talked."

She went on to study law at the University of Cape Town where she earned a BA degree. In 1978, a collection of her poetry was published in the book Black as I Am, with photographs by Peter Magubane.

During her political career, she served as the deputy president of the Soweto Youth Congress, was a member of the Release Mandela Campaign, and was an underground operative of Umkhonto we Sizwe. After Nelson was elected as South African president, and separated from Winnie, Zindzi was chosen to become the stand-in First Lady of South Africa from 1996 until her father remarried former Mozambique first lady Graça Machel in 1998.

In 2014 she was recommended to take up the position of South Africa's ambassador to Denmark and arrived in the European country in June 2015.

She sparked controversy in June 2019 when, as ambassador, she aimed a series of tweets at "apartheid apologists" and "land thieves" in the same month she expressed her "deep, pure unconditional love and respect" for Economic Freedom Fighters (EFF) leader Julius Malema.

She tweeted: "Dear Apartheid Apologists, your time is over. You will not rule again. We do not fear you. Finally #TheLandIsOurs."

When the Department of International Relations and Cooperation (DIRCO) launched an investigation against her for breaching their social media policy, Mandela remained defiant, tweeting: "I am not accountable to any white man or woman for my personal views. No missus or baas here. Get over yourselves #OurLand".

Mandela leaves behind her four children and her second husband Molapo Motlhajwa, who was a member of the South African National Defence Force. Zindzi Mandela-Hlongwane, and the Foreign Minister of South Africa, Alfred Nzo, on June 3, 1997 in Hamburg. In the evening, the daughter of South African President Nelson Mandela accepted the Ludwig Wishes Award in 1997 for her father. Nelson Mandela made a special contribution to international understanding not only in his country, said the chairman of the Central Council of Jews in Germany, Ignatz Bubis, in his laudation to the award winner. (Photo by Stefan Hesse / picture alliance via Getty Images)

President Cyril Ramaphosa said the sadness from her death was compounded because it was just days before the world commemorates the birthday of her father on 18 July.

"Zindzi Mandela was a household name nationally and internationally, who during our years of struggle brought home the inhumanity of the apartheid system and the unshakeable resolve of our fight for freedom," Ramaphosa said.

During an interview at the Edinburgh International Book Festival in 2018, Mandela said despite all the hardships her family endured, she would not have it any other way.

"That's all I've known. Everything else is just a fantasy. And what I have learnt from this is to define myself not according to what I have suffered, the anguish and so on, but according to how I've survived that," Mandela said.

We live in a world where facts and fiction get blurred
In times of uncertainty you need journalism you can trust. For 14 free days, you can have access to a world of in-depth analyses, investigative journalism, top opinions and a range of features. Journalism strengthens democracy. Invest in the future today. Thereafter you will be billed R75 per month. You can cancel anytime and if you cancel within 14 days you won't be billed.
Subscribe to News24
Next on News24
OBITUARY | Former City of Johannesburg mayor Mpho Moerane: 'Affable' and 'sharp-minded'