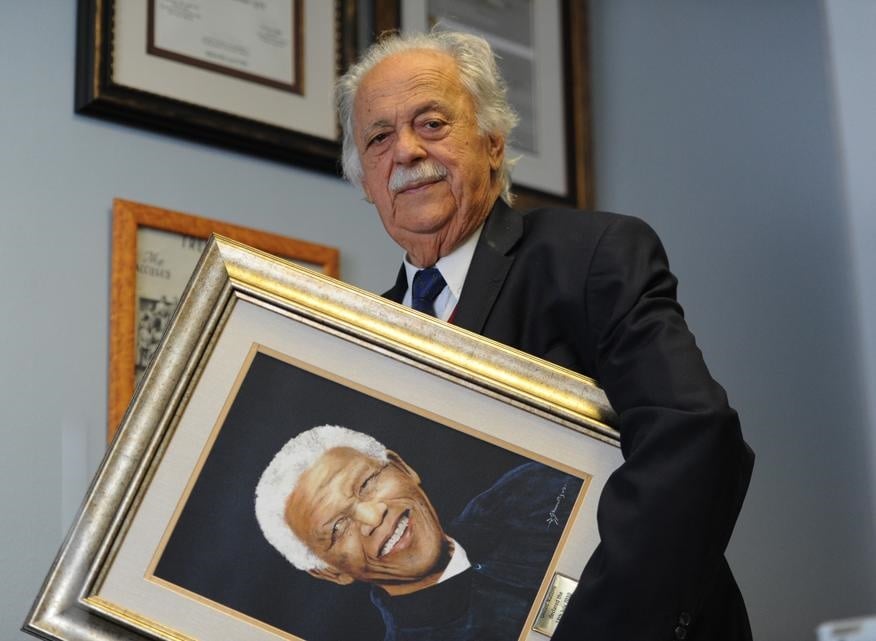 George Bizos was a prominent human rights lawyer who campaigned against apartheid in South Africa, most notably during the Rivonia Trial.
Lucky Nxumalo/City Press

Celebrated human rights lawyer and close friend of late president Nelson Mandela, George Bizos, died of natural causes at his home on Wednesday. He was 92.

Greatly admired for his intellect, tactical legal mind and commitment to justice, Bizos will be best remembered for being part of the legal team that represented Mandela and his co-accused in the Rivonia Trial in 1963-1964 where the struggle icon was sentenced to life imprisonment on Robben Island.

It was Bizos who now famously advised Mandela to add the words "if needs be" to the conclusion of the speech he delivered in the dock during the Rivonia Trial. The young advocate later said at the time he felt the speech was too strong, and was an invitation to the judge to hand them the death sentence.

Bizos met Mandela in 1948 when they were both students at the University of the Witwatersrand (Wits). The two remained close friends throughout the latter's years in prison and during his presidency, with Mandela writing in the prologue to Bizos' autobiography, Odyssey to Freedom:

"In my absence in jail he became the father of my family and my children and it is for that reason that the name George Bizos carries with me a particular sentiment which I have never forgotten."

Mandela's wife, Graça Machel, is quoted as having once said of the two's friendship, "Oh, those lovebirds! In our house, George was always, always right. If Madiba was not in a good mood and the phone rang and he cheered up, then I knew that it must be George on the line." 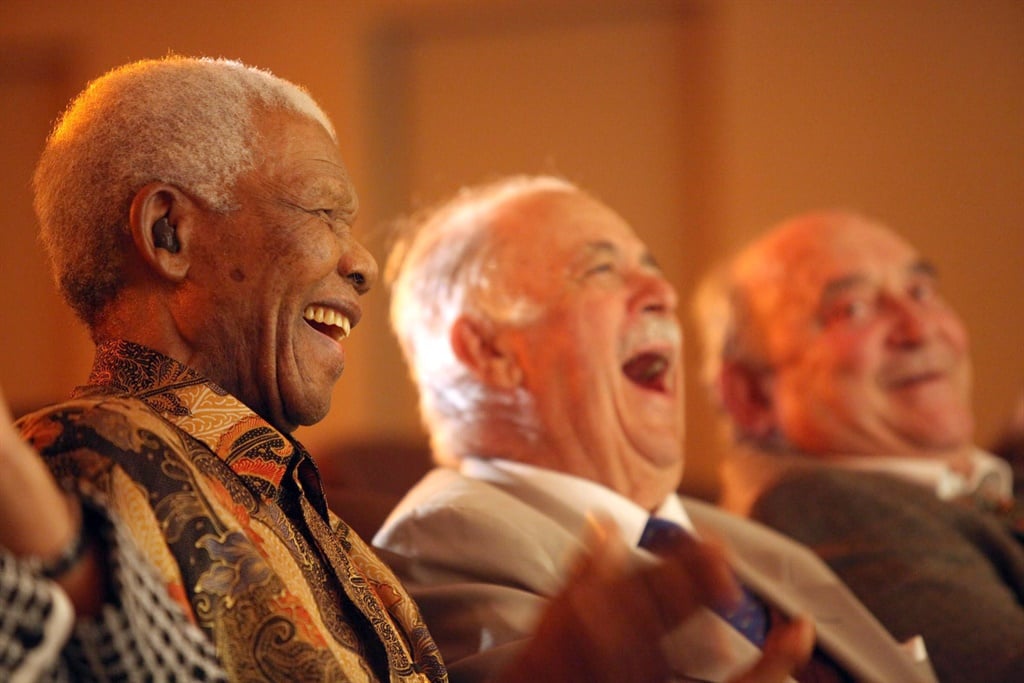 Described as a man with a subtle mind and a fierce commitment to the rule of law, Bizos used the courtroom as his battleground in the fight against apartheid.

He led the defence of the 22 accused in the Delmas Treason Trial of 1985-1989, along with his close friend and colleague Arthur Chaskalson, who would become the first president of the Constitutional Court.

Bizos also acted as counsel for the families of Ahmed Timol in 1971 and Steve Biko in 1977 at the inquests into their deaths during detention respectively.

When the inquest into Timol’s death was reopened in 2017 after the family found new evidence to suggest that he did not commit suicide by jumping, but instead may have been thrown out the 10th floor of what was then the John Vorster Square prison, Bizos testified how security police, the judiciary and some individuals from the medical profession worked together during apartheid to prevent the administration of justice.

While Bizos remained humble about his contribution to the struggle, it may be argued that several experiences early in his life served to prepare him for the crucial role he was to play in South Africa's transition to democracy. Born in 1928, he fled his native Greece at the age of 13 with his father after the German invasion of 1941. The two, along with two other Greek men and seven New Zealand soldiers, set off for Crete in an open fishing boat. After two days on the turbulent sea they sailed into an Allied fleet, who took them to Egypt. Here he stayed in an orphanage in Alexandria for 3 months before he fled with his father to South Africa.

In an interview with The Citizen in 2015, Bizos said, "We had a choice to either go to India or South Africa. My father had heard you could pick gold and diamonds off the pavement in South Africa – and that is how we got here." It was a decision that may well have altered the history of South Africa as a country.

Bizos' earliest memories of racial discrimination in South Africa were when they arrived in the harbour in Durban and he saw Zulu men pulling heavy rickshaws – work done by animals in Greece. He has told of how he shared his lunch with a black worker in the grocery store where he later worked as a boy in Johannesburg while his father went to work.

A teacher from Jeppe High School eventually discovered George in the store and enrolled him with extra classes to make up for the 3 years of schooling he missed. After graduating high school, he went to study law at the University of the Witwatersrand. Sydney Kentridge, who headed the defence team at the Bram Fischer trial with George Bizos on March 30, 1966 in Pretoria.
(Photo by Gallo Images / Rand Daily Mail)

It was here that he met Mandela and other lifelong friends such as Chaskalson and famous South African author Nadine Gordimer, and his political consciousness was awakened.

During his time at Wits he served on the SRC for 3 consecutive years and became involved in the struggle for the first time, where he was recorded as saying:

"If wanting my fellow black students to be treated equally makes me a leftist, I am proud to be one."

Bizos graduated from Wits Law School in 1953 with a BA LLB and was admitted to the Johannesburg Bar in 1954.

In 1979 he, together with Chaskalson, Johann Kriegler and Prof John Dugard opened the Legal Resources Centre (LRC) where he worked until his death.

At the Convention for a Democratic South Africa (Codesa) he served as advisor to the negotiating teams and participated in drawing up the Interim Constitution. He was involved in the drafting of legislation, and particularly the Truth and Reconciliation Bill and amendments to the Criminal Procedures Act, to bring it into line with Chapter 3 of the Constitution, guaranteeing fundamental human rights to all citizens of South Africa.

Most recently he was counsel for Morgan Tsvangirai, former leader of Zimbabwe’s opposition party on charges of treason for an alleged plot to kill President Robert Mugabe. Tsvangirai was acquitted. In June 1999 Bizos received the Order for Meritorious Service Class II from then president Mandela. He received the International Trial Lawyer Prize of the Year by the International Academy of Trial Lawyers in 2001. In 2004 the International Bar Association (IBA) named Bizos the winner of the 2004 Bernard Simons Memorial Award and he has also received the Duma Nokwe Human Rights and Democracy Award. He was awarded honorary doctorate degrees from the Universities of Natal (now KwaZulu-Natal), Cape Town, the Witwatersrand, as well as Walter Sisulu University.

Bizos spent his later life working as senior counsel in the Constitutional Litigation Centre at the Legal Resources Centre in Johannesburg to represent people threatened with eviction by officials of the South African government. He was one of 3 executors of Mandela’s will, which controversially was challenged by the late president’s second wife, Winnie Madikizela-Mandela, for leaving her nothing.

He is survived by his three sons. Bizos' wife Arethe died in 2017.

We live in a world where facts and fiction get blurred
In times of uncertainty you need journalism you can trust. For only R75 per month, you have access to a world of in-depth analyses, investigative journalism, top opinions and a range of features. Journalism strengthens democracy. Invest in the future today.
Subscribe to News24
Related Links
BREAKING | Anti-apartheid human rights lawyer George Bizos dies
PICS: Bizos remembers life-long friend Mandela as he celebrates his 92nd birthday
'Lion of our struggle’ George Bizos honoured with gallery at Joburg's Apartheid Museum
Next on News24
OBITUARY | Dirk Mudge, who fought for Namibia's independence, dies of Covid-19, aged 92