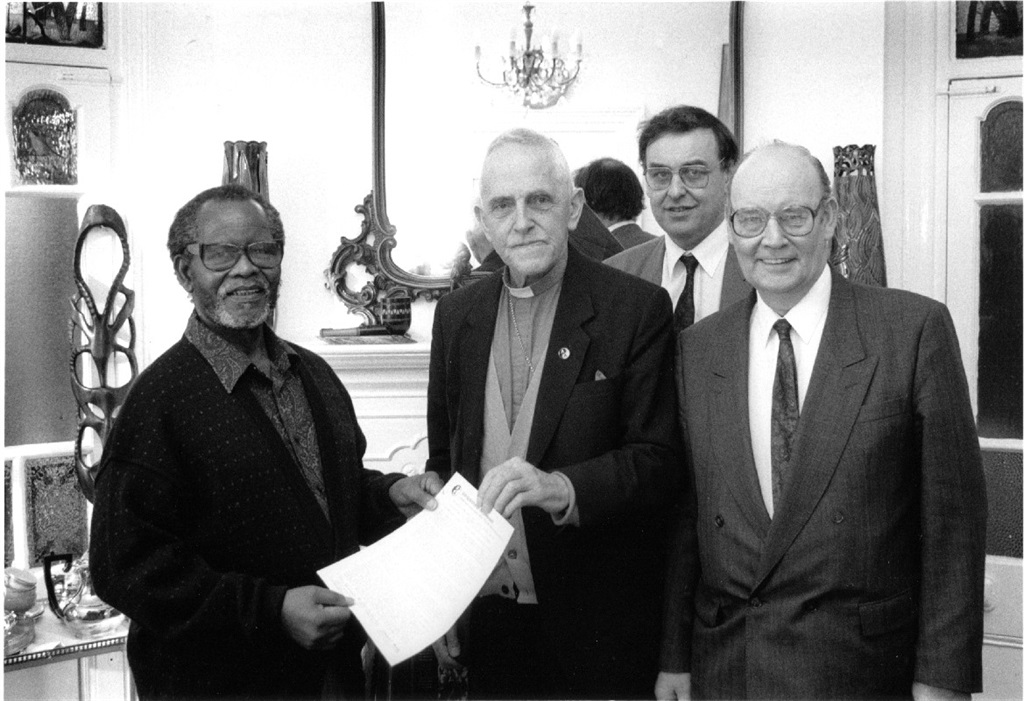 Lord Bob Hughes on the right with Archbishop Trevor Huddleston and Oliver Tambo. At the back is Huddleston and Mike Terry, Executive Secretary of the AAM. (AAM Archives.)

Lord Bob Hughes, 90, who died on Friday, spent some time in South Africa in his formative years. Christabel Gurney writes that his experience in South Africa left him with an unshakeable hatred of racism and colonialism, which underlay the whole of his future political career.

Lord Bob Hughes of Woodside, who died aged 90 last Friday, was Chair of the British Anti-Apartheid Movement (AAM) from 1976 until it dissolved itself, mission accomplished, after South Africa's first democratic election in 1994.

With the AAM's president, Archbishop Trevor Huddleston and its Executive Secretary, Mike Terry, he led the movement when it mobilised hundreds of thousands of people in Britain to call for sanctions against apartheid South Africa and the release of Nelson Mandela.

Hughes was born in Pittenweem, a small village in the north of Scotland and spent much of his life in Aberdeen. He joined the British Labour Party and in the 1960s, was a member of Aberdeen City Council and was elected as MP for Aberdeen North in 1970. He was a member of the engineering union AEU and had deep roots in the British labour movement. As its Chair, he gave the AAM gravitas and respectability as the very pattern of a Scottish Labour MP.

But uniquely among British parliamentarians, Hughes had spent his formative years in apartheid South Africa, emigrating as a teenager with his parents in 1947. He went to school in Benoni and then took up an engineering apprenticeship in Howick, near Pietermaritzburg. When he returned to Scotland in 1954, leaving his family in South Africa. His experience there left him with an unshakeable hatred of racism and colonialism, which underlay the whole of his future political career. He formed close friendships with southern African leaders, especially ANC President Oliver Tambo, and developed an unshakeable loyalty to the liberation movements in later years.

On his return to Britain, he first worked in the Movement for Colonial Freedom, becoming its joint chair, and then joined the AAM as its Vice-Chair, in 1975.

Already, as an Aberdeen Town Councillor, he had proposed a local boycott of South African goods. Anti-apartheid action was not popular in 1970s Britain. Hughes told how, when the South African government threatened to cancel an order for trawlers from an Aberdeen shipyard because of the local authority boycott, local workers opposed the ban. Later, he visited trade unionists at an aero part factory to persuade them to establish a union "political fund". The workers agreed that they needed one because "there's some silly bugger in Parliament trying to stop us selling aeroplane parts to South Africa". Bob stood firm, but had to tell them that the "silly bugger" was him.

In the 1980s, in response to uprising and repression in South Africa, the British AAM became a mass movement, with support from students, trade unionists, black and ethnic minority communities, faith organisations, Labour and Liberal Party supporters, and many people who had no political party affiliation. As chair, Hughes was in the lead in aiming to build a widely based social movement.

He said later: "We took a conscious decision that we would go for the biggest broadest based movement we could get. I didn't ask any questions of people who were members of the Anti-Apartheid Movement about what their religion was or what their politics were - didn't care if they were Communists or Tories or Liberals or whatever. If they were prepared to work with the Anti-Apartheid Movement, then they were our allies."

The first breakthrough came with the demonstration in June 1984 against apartheid president PW Botha's visit to Britain to meet with Prime Minister Margaret Thatcher. Thousands marched through London from Hyde Park to a rally and rock festival sponsored by the Greater London Council. Britain's black community was at the forefront of the protests for the first time.

Hughes chaired the rally at the south bank's Jubilee Gardens. The years 1985-1986 were the campaign's climax to pressure the British government into supporting UN mandatory sanctions against apartheid South Africa. In November 1985, after Thatcher had sabotaged the Commonwealth's attempt to impose sanctions, 150 000 people joined marches converging on London's Trafalgar Square to hear ANC President Oliver Tambo, SWAPO of Namibia leader Shapua Kaukungua and US civil rights leader Jesse Jackson call for sanctions. Again, they were introduced by Bob Hughes, who chaired the demonstration.

In 1988, the AAM launched its most significant ever initiative, the campaign to force the apartheid government to release Mandela: "Nelson Mandela: Freedom at Seventy". The idea for the campaign was born in December 1987, when Mike Terry and Hughes met future South African President Thabo Mbeki at an ANC solidarity conference held in Arusha, Tanzania. The campaign was kicked off by a rock concert at Wembley Stadium attended by a capacity crowd and broadcast by the BBC to over 60 countries. The plans for the concert were hugely ambitious; it was only made possible by the initiative of Bob Hughes, who approached Labour Leader Neil Kinnock to ask the Transport and General Workers Union to guarantee the payment for hire of the stadium.

The day after the concert, 25 marchers, one for each year of Mandela's imprisonment, set off to walk from Glasgow to London. They arrived on 17 July, the day before Mandela's 70th birthday, and were joined by quarter of a million people at a rally in London's Hyde Park. Hughes introduced Archbishop Desmond Tutu, who called for Mandela's release. As a result of the campaign, Nelson Mandela became a household name across the world. The last meeting of the British AAM Executive in 1995. Lord Hughes is sitting next to Cyril Ramaphosa.(AAM Archives).

As well as his frontline role, Hughes spent countless hours chairing AAM committee meetings, drafting letters to the government, and consulting with AAM Executive Secretary Mike Terry and other officers. He was always on hand to help with the day-to-day running of the organisation. The movement was cash-strapped, and its officers risked their personal finances to keep it in business. Its staff also came under physical threat from apartheid agents, and on one occasion, after a firebomb attack on the AAM headquarters, Bob Hughes instructed that no staff member should work in the office after hours.

In the British Parliament, Bob Hughes worked with fellow MPs, including Joan Lestor and Richard Caborn from the Labour Party, Liberal David Steel and Conservative Peter Temple-Morris, to wrest control of the All-Party Parliamentary Group on Southern Africa from the ultra-right led by the "Member for Pretoria" John Carlisle. He led in organising delegations to Ministers and drafting Early Day Motions and questions to the Prime Minister on Southern Africa.

Under-Secretary of State for Scotland

At the same time as his work in combating apartheid, Hughes was a big hitter in the Labour parliamentary party. In 1975-1976 he was Under Secretary of State for Scotland and from 1985 to 1988 joined the Labour shadow Cabinet, serving as shadow Transport Secretary.

In 1990, he represented the AAM at Namibia's independence celebrations, and in 1994 returned to South Africa for the first time in 40 years to act as an observer in the country's first democratic election in the same place he had gone to school, Benoni.

When the AAM wound up in 1994-1995, Hughes became President of its successor organisation, ACTSA (Action for Southern Africa), which continues to campaign for equality and human rights throughout Southern Africa.

Hughes played a unique and irreplaceable role in the Anti-Apartheid Movement. He was selfless and principled and, above all, effective. He remains an inspiration to everyone working for a future free of corruption, inequality and prejudice for the peoples of southern Africa.

- Christabel Gurney is a former British Anti-Apartheid Movement activist and editor of the AAM’s newspaper Anti-Apartheid News. She is the Secretary of the AAM Archives Committee and a member of the Advisory Council of ACTSA (Action for Southern Africa).

Disclaimer: News24 encourages freedom of speech and the expression of diverse views. The views of columnists published on News24 are therefore their own and do not necessarily represent the views of News24.
We live in a world where facts and fiction get blurred
In times of uncertainty you need journalism you can trust. For 14 free days, you can have access to a world of in-depth analyses, investigative journalism, top opinions and a range of features. Journalism strengthens democracy. Invest in the future today. Thereafter you will be billed R75 per month. You can cancel anytime and if you cancel within 14 days you won't be billed.
Subscribe to News24
Next on News24
Christi van der Westhuizen | FW de Klerk: A defender of his roots until the end