ANALYSIS: Covid-19 and the redemption of Zweli Mkhize, the ultimate political survivor He’s been clocking up thousands of kilometres across South Africa over the last four weeks, managing a pandemic that threatens to engulf the whole of society. For Zweli Mkhize, the minister of health, defeating the coronavirus could represent a redemption, writes Pieter du Toit.

Zweli Mkhize looks thinnner than he used to be. And not as tall and broad-shouldered as he was when he was the ANC’s treasurer general under the leadership of Jacob Zuma.

Before he’s ushered into the briefing room at government’s communications hub in central Pretoria, among a whole throng of ministers, Mkhize sits quietly in a boardroom, eating a bowl of fruit while a succession of government officials stops by to share information, or ask advice. He politely answers questions inbetween taking bites, and warmly greets Aaron Motsoaledi, his predecessor as health minister, now in charge of home affairs.

He has been racking up thousands of kilometres across the country over the past four weeks, visiting testing sites in Khayelitsha, hospitals in Bloemfontein and dismissing fake news in Durban. Mkhize is leading South Africa’s response to the deadly novel coronavirus, that leads to the Covid-19 disease, and which has caused more than 1 900 infections.

"I sleep okay, I sleep normal hours," he tells me before the briefing. "But I am worried whether we’re doing enough, enough to make people understand how serious this virus is and what they need to do (to prevent the spread)." Health Minister Zweli Mkhize during a visit to Khayelitsha this week. He has been clocking thousands of kilometres in the fight against Covid-19 over the last three weeks. (Media24 Archives).

Mkhize is a rare breed of South African politician. Although he has been in government and politics since 1994, when he became a provincial MEC, he is a qualified medical doctor who practised medicine before going into exile in 1986, continued to do so in Swaziland and Zimbabwe and again when he returned in 1991, when he opened a practice in Pietermaritzburg.

He graduated from the era of Nelson Mandela, outlived Thabo Mbeki, survived Jacob Zuma, to whom he was loyal for a decade, and now plays a starring role under Cyril Ramaphosa. He’s a dexterous politician, adept at charting his way through the labyrinth of internal ANC politics, from being a powerful regional politician during the nascent years of democracy, to the top six of the governing party and finally the senior minister under a reformist president.

He was KwaZulu-Natal MEC for health for a decade from 1994, then became MEC for finance and economic development, before he was appointed premier in 2009, and was elected to the ANC’s top six in 2012. He’s also served on the party’s national and provincial executives for almost 30 years.

Mondli Makhanya, editor of City Press, who first came across Mkhize during the bloody Natal Midlands conflict in the early 1990’s, says no one knows his way around the ANC like Mkhize does. "Yes, Zuma was good at giving speeches and being out there… but there’s nobody that can work, operate and knows the party like Mkhize does."

He's a political survivor. And now he’s in charge of South Africa’s fight against Covid-19.

Responding to the challenge

South Africa’s response to the coronavirus has been lauded at home and abroad, with a BBC report declaring it as "ruthlessly efficient", particularly giving a country plagued by corruption and questionable governance a welcome boost.

When the first case of the new coronavirus was reported at the beginning of March, the president and his health minister acted quickly. Health officials were dispatched to Patient One, with tracking and tracing starting almost immediately. By the following week, the National Institute of Communicable Diseases (NICD) had made an initial presentation about the virius to Cabinet, and on 15 March Ramaphosa delivered his first address to the nation, declaring Covid-19 a national disaster.

Jacob Zuma (left), Cyril Ramaphosa and Mkhize during the ANC's elective conference at Nasrec, south of Johannesburg in December 2017. Mkhize was close to the president until he dismissed Nhlanhla Nene as finance minister in 2015. (Media24 Archives).

That he’s deeply concerned about the impact of the virus is indisputable. The relatively low numbers are the "calm before the devastating storm", he said recently and warned about winter and the annual flu season.

"This will flood our hospitals and clinics and create a fertile ground for the coronavirus to spread or to be masked in its presentation. This means, with this small growth in numbers, we may be experiencing the calm before the devastating storm.

"We need to be aware that there may not be many further warnings before the pounding descends."

Mkhize has been visible and vocal about the virus and his department’s response. He has delivered regular media briefings, speaking with calm and authority about the spread of the virus, bringing in scientists and experts to help explain the pandemic.

John Steenhuisen, DA leader, says he’s impressed by Mhkize’s leadership and wouldn’t have done anything differently. And Cheryl Cohen, one of the epidemiologist leading the NICD’s operations, says the minister understands the science and is responsive to it.

The tragedy of HIV/Aids

The coronavirus isn’t the first pandemic the country has faced, or that Mkhize was involved in stopping.

He was MEC for health in KwaZulu-Natal between 1994 and 2004 when Mbeki was president and Manto Tshabalala-Msimang his health minister.

According to Mia Malan, editor of the Bhekisisa Centre for Health Journalism, the Mbeki years were "one of the most tragic chapters in the nation’s history".

"Mbeki’s HIV denialism saw the president vehemently opposed to making HIV treatment available, because of unfounded beliefs that ARVs were poisonous. Hundreds of thousands, many of them in KwaZulu-Natal, died as a result," she wrote in 2019.

Mkhize, she says, defied Mbeki when he introduced antriretrovirals at some hospitals in KwaZulu-Natal. And when the state eventually introduced free treatment, more then 10 000 people in the province were already receiving antiretrovirals.

"However, as an influential member of the ANC’s provincial executive (he was ANC chairperson in KwaZulu-Natal from 2008-2013 and treasurer between 1994 and 1997), and a member of the party’s national executive committee (he became a member in 1990), Mkhize — at least publicly — also toed dangerous political lines."

Nathan Geffen, who was at frontline in the fight against HIV/Aids with the Treatment Action Campaign, questioned his approach and argued that Mkhize didn’t always act with conviction. When the TAC was forced to go to court in order to get the Mbeki government to introduce antiretrovirals for pregnant mothers, he opposed the application. 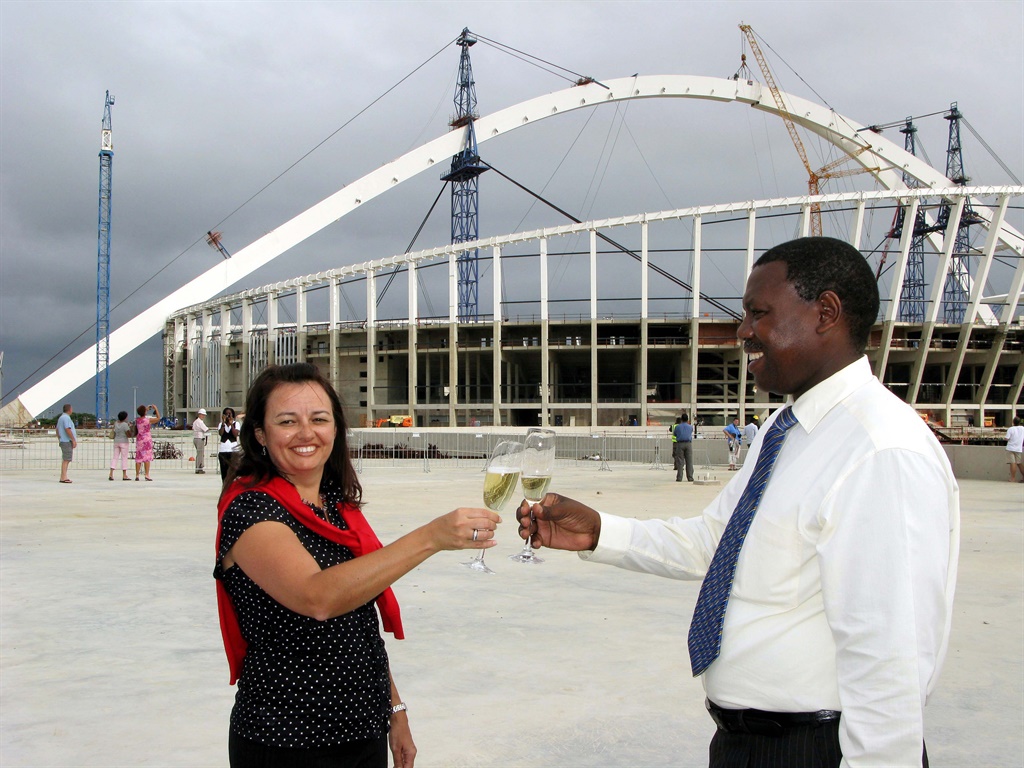 Mkhize, then MEC for finance and economic development, toasts the completion of the Moses Mabhida Stadium with the eThekwini Metropolitan Municipality's Julie-May Ellingson. (Media24 Archives.)

When Mkhize later wrote an open letter to Mbeki, urging him to repent, Geffen wasn’t convinced, responding that Mkhize was reluctant to stand on principle.

The government’s opposition to the introduction of antiretrovirals to prevent mother-to-child transmission was deadly, Geffen wrote on the news site GroundUp in 2017.

"Thousands of babies became infected and died because of the state’s intransigence on the prevention of mother-to-child transmission. Mkhize knew this, as he admitted in his letter to Mbeki. In the letter he described how health workers 'pleaded that their consciences did not allow them to sit and watch as children died'. It was 'a view I shared,' wrote Mkhize.

"But he could not bring himself to break ranks with Mbeki publicly, not then anyway. The prevention of mother-to-child transmission case was an occasion when it was necessary for Mkhize to speak out, but he didn’t."

In his letter to Mbeki however Mkhize angrily details his frustration with the then-president’s denialism, saying: "Mbeki made very serious errors of judgement… he made the fight unwinnable, a commander who issued wrong instructions and left his soldiers to be defeated.

"A silent war was raging behind closed doors and in hospital wards. It was sweeping away the lives of young, old, rich and poor… HIV/Aids could be ignored by the topmost authority, in denial," he wrote, explaining his efforts as MEC and member of the ANC’s national executive to challenge Mbeki and Tshabalala-Msimang.

His proposal to test Nevirapine at the majority of government hospitals was rejected, his challenges to Mbeki over the president’s quackery were defeated, and he was accused of wanting to oust Tshabalala-Msimang.

Mkhize supported Zuma at the ANC’s 2007 elective conference and became chairperson of the health and education committee in the party’s national executive committee. He rose to the top table in 2012, becoming the ANC’s treasurer general. "Zuma and Motsoaledi led the implementation of the Aids management plan and championed it aggresively," Mkhize said.

Today, South Africa has the largest antiretroviral programme of its kind in the world.

Mkhize broke with Zuma after the dismissal of Nhlanhla Nene as finance minister in December 2015, and was part of a crisis meeting with big business where the repercussions of Zuma’s decision were discussed. He was also critical of Zuma’s subsequent firing of Nene’s successor, Pravin Gordhan, two years later, and launched his own bid for the ANC’s presidency in 2017 (Makhanya says he never stood a chance).

Initially considered a front-runner, Mkhize ran an aggressive campaign, aligning himself with Ramaphosa, before seemingly throwing in his lot with the "unity project" initiated by Paul Mashatile and David Mabuza. He later withdrew his candidacy for deputy president, and was appointed to Cabinet by Ramaphosa after securing the influential first position in the election to the party’s national executive.

It is from there that Mkhize is trying to prevent a national health catastrophe, in command of the national department of health – once headed by Tshabalala-Msimang – but with a president in charge who trusts science.

Mkhize has now come into his own, Makhanya says. "During a time like this, a government needs to build trust, and he has been honest from the start, warning us about what is coming."

Not only is he a seasoned politician, but he’s a genuinely smart man. "When he does, he speaks very deliberately, he is clever, smart and able. And although there have been questions about his probity, like with the Ithala scandal, no impropriety has ever been proven."

Steenhuisen, who opposed Mkhize as leader of the opposition in the provincial legislature in Pietermaritzburg, found him to be an effective administrator with whom he had a constructive relationship.

And Geffen, once one of Mkhize’s most vocal critics, says he is impressed by the minister of health. "He has a frightfully difficult job to do, and he and Ramaphosa have thus far made the right decisions, given the huge limitations we have."

Mkhize might have been constrained and hamstrung during the initial stages of the fight against HIV/Aids. And his efforts to influence, convince and force Mbeki into a different direction might have failed.

But he is now the man in charge of saving thousands of lives, and with that a shot at redemption.

We live in a world where facts and fiction get blurred
In times of uncertainty you need journalism you can trust. For 14 free days, you can have access to a world of in-depth analyses, investigative journalism, top opinions and a range of features. Journalism strengthens democracy. Invest in the future today. Thereafter you will be billed R75 per month. You can cancel anytime and if you cancel within 14 days you won't be billed.
Subscribe to News24
Related Links
Mkhize: Health workers are our primary soldiers in coronavirus fight, they have to be safe
'Her passing leaves us poorer' - Zweli Mkhize pays tribute to HIV scientist Prof Gita Ramjee
FIRST TAKE: Mkhize sounds ominous warning about the calm ‘before the devastating storm’
Next on News24
ANALYSIS | Inside SA’s first state capture trial: The players, the case and the consequences