Elmien du Plessis | Do we need a state of emergency for the current violence? 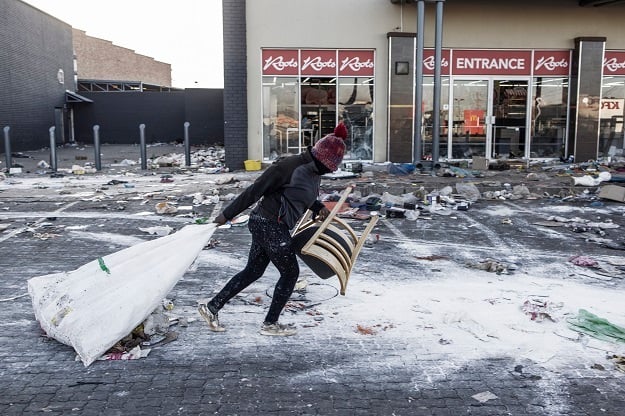 South Africans still remember the 1980s and the states of emergency declared with horror, where states of emergency were used to stifle opposition against the laws and policies of the apartheid government, writes North-West University associate professor of law Elmien du Plessis.

On Monday, with the deployment of troops, and the president announcing that he will address the nation, many people wondered whether he was going to declare a state of emergency.

Prominent lawyers, such as Vusi Pikoli and Dumisa Ntsebeza, supported the declaration of a state of emergency, with the beer industry, AgriSA and the Consumer Goods Council of South Africa following suit.

But is this necessary, and how will it work?

What is a state of emergency?

Legal definitions of a state of emergency tend to be broad, but it does seem to share certain common characteristics. It deals with cases where the situation requires states (and citizens) to move effectively and efficiently to address the problem. Actions must be aimed to ensure the state's survival and its citizenry, bringing back the situation to normal as soon and effectively as possible by temporarily changing how the state functions.

States of emergency create a legal state that is different from times of normalcy. When there is an emergency, regardless of nature, it forces the state to temporarily change some of its structures to address the situation. Typically, the balance of power tips towards the executive, tasked with addressing the emergency.

The threat must be of a magnitude that will severely harm the state or the citizens, if not treated in a way that the regular legal order does not provide for.

An emergency situation is exceptional.

This means, once the exceptional situation is no longer present, emergency law-making should also end and return to normality.

Emergency situations do not displace the rule of law. The law continues, albeit in a different form. Therefore, emergency laws do not do away with the principles of democracy, although it can temporarily change the structure.

Declaring a state of emergency

The Act, the State of Emergency Act 64 of 1997, provides in section 1 that "the president may by proclamation in the gazette declare a state of emergency in the Republic or in any area within the Republic".

It is important to note that, in terms of the Act, a state of emergency can also be restricted to a specific area.

Such a declaration enables the president (and not the minister of cooperative governance, as some WhatsApps suggest) to make regulations that must be tabled in Parliament to allow for input, allowing members to disapprove or make recommendations.

The Constitution also provides that courts can decide on the validity of the state of emergency and the regulations promulgated in terms of it.

When is it 'necessary'?

If the ordinary law of the land can bring a restoration of peace and order, an emergency cannot be justified. The requirement of "necessity" requires proportionality. In other words, the declaration of the emergency must be proportionate to the response to the threat. However, there are opinions that this implies that the state has no alternative means at its disposal.

Just because there is some kind of disorder does not mean that section 37(1) of the Constitution is complied with. This section is obviously open for interpretation and will depend on the facts. Still, in general, the threat or the danger must be so significant that only a declaration of a state of emergency is necessary to restore peace and order. It is the last resort since it has vast implications for how democracy functions, but, more importantly, it has a big impact on our rights.

During a state of emergency, most of the rights in the Bill of Rights can be derogated (suspended), but only to the extent that this is strictly required by the emergency. Such derogation is only temporary. Legislation that is promulgated (the regulations, specifically), must be made public, and there are certain rights that we deem so important that it simply cannot be derogated – like life, equality and dignity.

It is important to reiterate, while the rights are suspended to the extent that it is necessary to deal with the emergency, the Constitution itself is not suspended.

All this must happen in the framework of international law. Importantly, the state cannot indemnify itself in respect of unlawful acts. (As an aside: you might remember that the state tried to do that in the first set of disaster regulations, but quickly repealed those provisions).

What about the Disaster Management Act?

We currently have a state of disaster to deal with Covid-19. One of the concerns raised is that the Disaster Management Act cannot be applicable simultaneously with a state of emergency. This is because of section 2(1) states: "This Act does not apply to an occurrence falling within the definition of 'disaster' in section 1(a) if, and from the date on which, a state of emergency is declared to deal with that occurrence in terms of the State of Emergency Act".

If the two cannot apply simultaneously, we are in trouble if a state of emergency is declared, as all the Covid-19 regulations rely on the Disaster Management Act.

My colleague, Professor Dewald van Niekerk, suggested another possibility, viewing the violence as a "complex disaster", where one deals with multiple hazards. This might provide the necessary justification to using the Disaster Management Act to help with the violence, if needed.

If the government is going to use the Disaster Management Act to contain the violence, it would be prudent to state that the State of Disaster now deals with the specific complex disaster that includes the violence (that must be carefully circumscribed) as well.

Should South Africa declare a state of emergency for the violence and unrest we are experiencing now?

Since we don't really have guidelines on when it might be necessary, the European Court of Human Rights' guidelines might be helpful. According to the court, a state of emergency can be declared if the threat is actual or imminent; it involves the whole nation, the continuance of the organised life of the nation is threatened, and normal measures are inadequate.

I don't think that we are there yet. And if the government and ANC learn lessons from the past few days, it will use the conflict as an opportunity to get an urgent political solution and to start crafting policies to facilitate deep-seated changes in policy to ensure that we address the unacceptable inequality and poverty levels in this country.

Many South Africans still remember the 1980s and the states of emergency declared with horror, where states of emergency were used to stifle opposition against the laws and policies of the apartheid government. The current violence is a dangerous mixture of violence and politics in a nervous and gatvol society filled with these memories.

That being said, let's rather work together, so as not to get there.