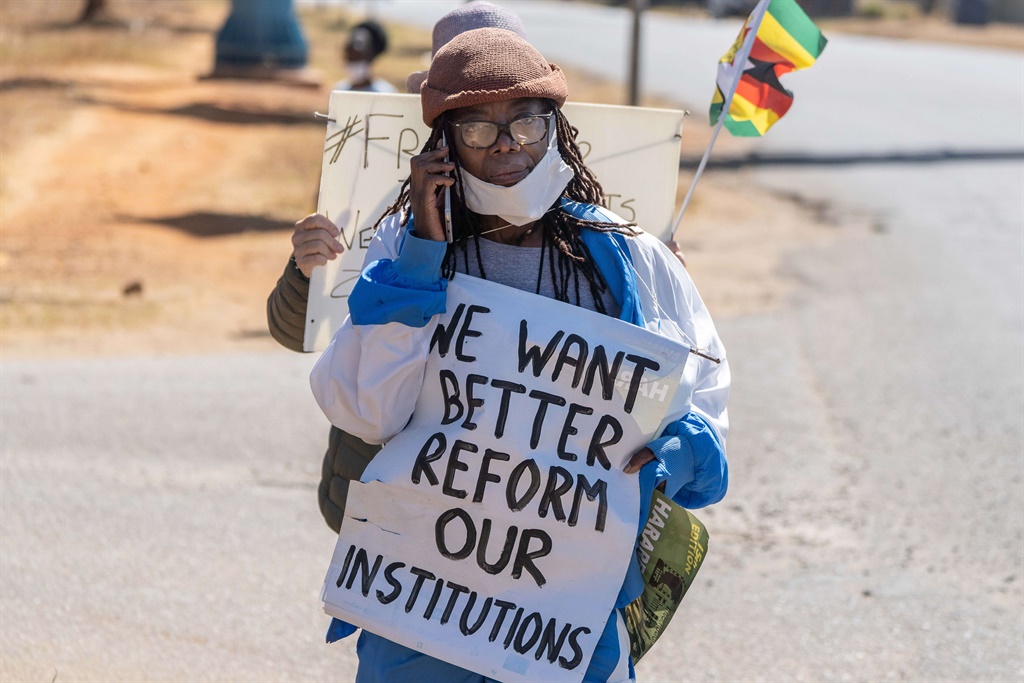 A number of Zimbabwean journalists and activists have been arrested as President Emmerson Mnangagwa launched a crackdown on planned nationwide protests on 31 July.

Several activists have also allegedly been abducted or beaten in recent weeks after they either spoke out against alleged corruption, or were critical of the Zanu-PF-led government.

Among those targeted by the Zimbabwean state is prominent Zimbabwean investigative journalist Hopewell Chin'ono, 49, who is still in police custody after his recent arrest in his home country's capital of Harare on 20 July.

In addition, renowned author Tsitsi Dangarembga, 61, was arrested during anti-government protests and was released on bail on Saturday.

Here is what you need to know about what is happening in Zimbabwe:

What happened ahead of the planned nationwide protests?

Ever since the start of Zimbabwe's national lockdown, the country has seen protests by activists and healthcare personnel over the country's poor response to Covid-19, and lack of care to the vulnerable in society.

The country is facing one of its worst economic crises in more than a decade, marked by inflation running above 700%, acute shortages of foreign currency and public hospitals crippled by strikes and a lack of medicine. Food shortages have also been reported.

In May, opposition Member of Parliament Joana Mamombe, along with Cecilia Chimbiri and Netsai Marova, were arrested at a roadblock guarded by police and soldiers, where they were abducted, tortured and sexually assaulted.

At the time, Amnesty International's Muleya Mwananyanda said: "The charges levelled against these nurses, to enforce Covid-19 lockdown regulations, are clearly aimed at preventing them from organising and speaking out against low wages and terrible working conditions."

The Dutch embassy in Zimbabwe described Chin'ono's arrest as "part of a worrying trend against free speech in Zimbabwe", but Secretary for Information Nick Mangwana said journalists were not above the law.

On the same day, Mnangagwa announced vast new lockdown measures, including a new 18:00 to 06:00 curfew, and forcing "non-working sections" of the population to stay at home.

A day before planned nationwide protests on 30 July, Amnesty International said police arrested the sister of investigative journalist Mduduzi Mathuthu, and refused to release her until the journalist appeared at Bulawayo Central police station.

Mathuthu is the editor of online publication Zimlive and has been charged with planning the protests.

What happened on 31 July?

On Friday, 31 July, Zimbabwean businesses were closed and streets deserted in the capital Harare early on Friday as security forces increased patrols to stop anti-government protests called by activists over corruption and economic hardship.

Security forces also increased checkpoints on roads leading into central Harare which led to a number of arrests, the SABC reported.

In central Harare and nearby Mbare township - a hotbed of past protests - businesses, including banks and supermarkets, were shut as police and soldiers patrolled the streets.

"Workers were told not to come today just in case there was trouble," a security guard, who identified himself as Martin, told Reuters.

Mnangagwa described the planned protests as an "insurrection" by the opposition.

Amnesty International said a number of activists went into hiding ahead of the protest after police published a list of names of human rights defenders wanted for questioning in connection with the planned protests.

The increased police presence largely halted the planned protest, however, some individuals bravely defied the banning order and were arrested.

This included opposition party MDC's spokesperson Fadzai Mahere and Henry Chivanga - an activist fighting for the rights of people with disabilities - both were arrested.

Police spokesperson Paul Nyathi said five people were arrested in total for inciting public violence after protesting in their neighbourhood, including novelist Dangarembga.

Mnangagwa, like his predecessor Robert Mugabe before him, described the economic crisis in Zimbabwe as the result of sabotage by businesses and an opposition funded by the West.

In a televised address on Tuesday, Mnangagwa said his economic reform agenda has seen a number of headwinds including the "divisive politics" by opposition leaders, "illegal sanctions", droughts and the Covid-19 pandemic.

"We will defeat the attack and stop the bleeding of our economy, we will overcome attempts at destabilisation of our society by a few rogue Zimbabweans acting in league with foreign detectors," Mnangagwa said.

He said that "dark forces" both inside and outside Zimbabwe "have tampered with" the country’s growth for "too long".

"The bad apples that have attempted to divide our people and weaken our systems will be flushed out."

Amnesty International said the country had launched a witch-hunt against political and human rights activists suspected of being behind the planned demonstration.

"This latest witch-hunt and repression of peaceful dissent is a continuation of what we have seen in the country in recent years, including the abductions and arbitrary arrests of those who are critical of the government, in an attempt to muzzle differing views. The thwarting of the protest illustrates the Zimbabwean authorities' total intolerance of criticism," Amnesty International's Mwananyanda said.

Both bodies also called for the immediate release of Chin'ono and reminded the Zimbabwean government that journalism was not a crime.

We live in a world where facts and fiction get blurred
In times of uncertainty you need journalism you can trust. For 14 free days, you can have access to a world of in-depth analyses, investigative journalism, top opinions and a range of features. Journalism strengthens democracy. Invest in the future today. Thereafter you will be billed R75 per month. You can cancel anytime and if you cancel within 14 days you won't be billed.
Subscribe to News24
Related Links
EXPLAINER | SARU clears Eben Etzebeth of racism claims but where to from here for SAHRC process?
EXPLAINER | Why UFS academics believe more pandemics may be on the way
EXPLAINER | What the Supreme Court of Appeal judgment means for gun owners
Next on News24
ANALYSIS | Earthquake in Turkey and Syria: How satellites can help rescue efforts