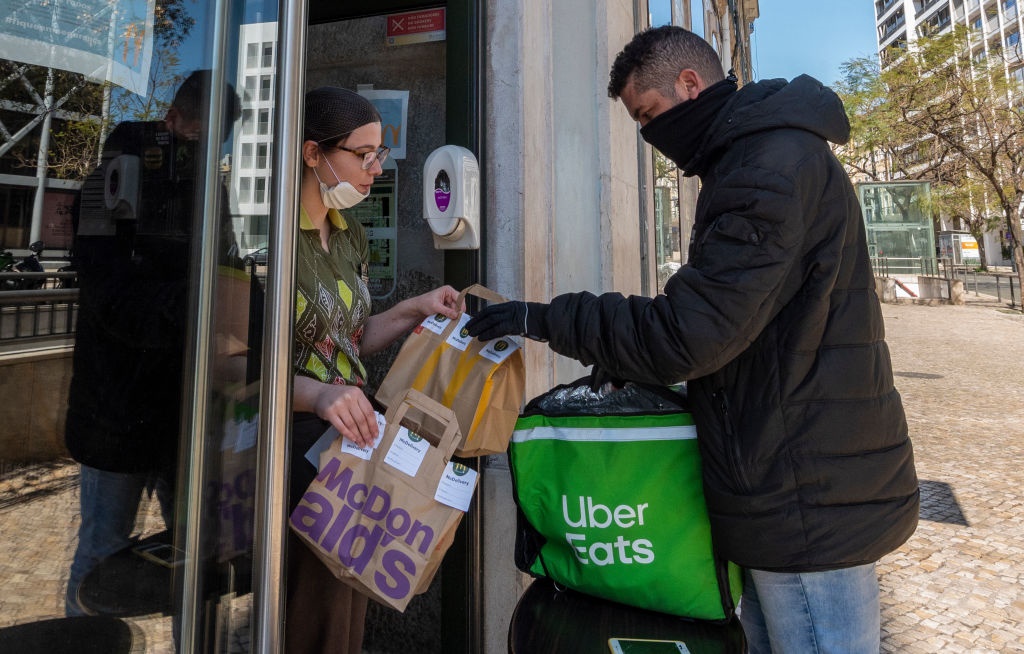 E-commerce services like Uber Eats have slowly been reintroduced during the Covid-19 lockdown. (Horacio Villalobos/Corbis via Getty Images)

Since the implementation of the lockdown Level 4 regulations at the beginning of May, the South African government has moved to relax a number of regulations.

The Level 4 regulations have been fiercely criticised for being arbitrary and defeating the purpose of the lockdown, which is to slow the spread of the coronavirus, and help authorities prepare.

President Cyril Ramaphosa on Wednesday evening admitted that some of the state’s action has been unclear, contradictory and poorly explained.

READ | All online shopping allowed - except alcohol and tobacco

Aside from moving most of the country to lockdown Level 3 at the end of May, Ramaphosa said certain changes would also be made to Level 4 regulations.

Here are all the changes to Level 4 regulations this far:

The sale of winter clothes expanded to, among others, include 'crop bottoms'

Trade and Industry Minister Ebrahim Patel expanded the list of winter clothes permitted to be sold during Level 4 to include any baby clothing, underwear, "crop bottoms" and exercise clothing, but the sale of T-shirts and open-toe shoes, such as sandals, remained prohibited.

The Democratic Alliance said the list seemed to have been "plucked from Alice in Wonderland", and writer Justice Malala tweeted that the rules are "embarrassingly nonsensical regulations".

The National Clothing Retail Federation (NCRF), whose members include TFG, MrPrice, Truworths,  Woolworths, Pick n Pay Clothing and Queenspark, however, welcomed the regulations, saying the list was compiled after robust engagement between the government and stakeholders.

Truworths CEO Michael Mark said he had been "extraordinarily impressed" by the round-the-clock efforts from the minister and his team in handling the complexities around the reopening of retail stores.

Unfretted e-commerce, aside from tobacco and liquor sales

Less than a day after Ramaphosa said the rules around e-commerce would be changed, Patel issued directives that allow e-commerce companies to sell nearly anything, except for liquor and tobacco.

Patel previously said e-commerce would remain limited to office equipment and other essential food items during Level 4, as opening it up completely would be "unfair competition".

He said, if e-commerce was opened completely, physical stores, informal stores and spaza shops would request the same.

South Africa had been one of the only countries in the world to shut down online e-commerce, apart from the sale of essential goods, during its national Covid-19 lockdown.

New rules for when you want to move your home

The government dropped a deadline which allowed people to move to new homes across provincial, metropolitan, or district level on a once-off basis until 7 June.

The new regulations also allow victims of domestic violence to move to a different place, and businesses are allowed to relocate to new premises.

South Africa beyond Covid-19 | When the public's perception is that regulations are inexplicable or are motivated by reasons not linked to the intended outcomes, confidence in the government is bound to suffer, writes @MMkhabel https://t.co/Kxs1gQHkK8 pic.twitter.com/8mGEiwINZr

To facilitate these moves, the transportation of household goods (in the case of moving house) and office furniture is now allowed.

Cellphone numbers may be ported to new networks again

South Africans may once again change mobile networks without losing their cellphone numbers, after the service was suspended in March before the national lockdown.

This allows customers to move between cellular networks more freely and was imposed on mobile operators in order to drive down prices.

Communications Minister Stella Ndabeni-Abrahams previously argued that porting had to be blocked to stop scammers from taking advantage of South Africans during a time of disaster.

Fraudsters regularly use fake number-porting requests to take over phone accounts and intercept SMSs in order to access bank accounts.

The government previously said no vehicles, whether public or private transport, were allowed on the roads outside of 05:00 to 20:00, but that there would be an hour's grace period "to complete a journey" to 21:00.

Business Insider reported, however, that Transport Minister Fikile Mbalula soon changed regulations to allow public transport, including minibus taxis, to only operate between 05:00 to 19:00, with no mention of a grace period. Instead, "the driver must ensure that the drop off is completed by 19:00".

The section governing the permitted times of private vehicles on the road was deleted by the same amendment, implying that private car owners can be on the road only until 20:00, when the national curfew starts.

We live in a world where facts and fiction get blurred
In times of uncertainty you need journalism you can trust. For 14 free days, you can have access to a world of in-depth analyses, investigative journalism, top opinions and a range of features. Journalism strengthens democracy. Invest in the future today. Thereafter you will be billed R75 per month. You can cancel anytime and if you cancel within 14 days you won't be billed.
Subscribe to News24
Related Links
EXPLAINER | What exactly is the National Coronavirus Command Council?
EXPLAINER | Do we know when SA is dropping from Level 4, and what happens at Level 3?
EXPLAINER | Tobacco, jogging and movement: How the government makes lockdown decisions
Next on News24
The lost Mandela tapes | Power and conviction in his voice, but also loneliness, says biographer