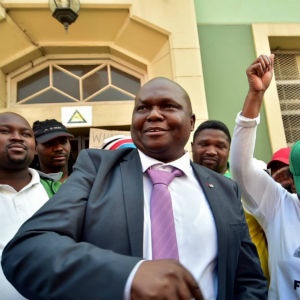 The new alliance governing Nelson Mandela Bay (NMB) is a rent-seeking coalition that will divide the metro into turfs and give the new council licence to take whatever spoils they can for personal gain, says author and activist Crispian Olver.

The author of How to Steal a City: The Battle for Nelson Mandela Bay says he has no doubt that with Mongameli Bobani of the UDM as mayor, the gains in clean governance made by the DA-led coalition will eventually be reversed.

"There's been a fairly stable municipal administration build-up. And it's going to take time for a new mayoral committee to make any major changes. You can't start stealing on day one. It takes a couple of months to set that up and, in order to do it properly, you have to get your people in," he said.

"So, the immediate implications will not be that severe, but Nelson Mandela Bay has only just come out of a really tricky financial situation and it's going to take very little to take the city back to a fiscally constrained position."

According to Olver, who was tasked by Pravin Gordhan in 2016 to clean out the corrupt politicians and criminal syndicates that had captured Nelson Mandela Bay's administrative machinery, Bobani's election is particularly problematic.

"Bobani is a deeply corrupt man. He's a very shrewd operator who covers his tracks carefully and no one has been able to make a corruption charge stick to him.

"He was teaching the ANC councillors how to do sophisticated rent-seeking. So, for instance, he was previously on the City's human settlements committee and there were three councillors on the committee with him that would delay all the zoning and town planning that came through. Then one of the three would phone the developer and ask for facilitation fees in order to get the contract.

"The corruption wasn't restricted to particular party divides, but the person who was really thinking up that scheme and coordinating it was Bobani."

Olver was also concerned to hear that the ANC's Andile Lungisa had been appointed to the mayoral committee, to be in charge of infrastructure and engineering. Lungisa has been sentenced to an effective two-year sentence for assault with the intent to cause grievous bodily harm, for smashing a glass jug over the head of former member of the mayoral committee Rano Kayser during a council meeting in 2016. He is currently out on bail, pending his application for leave to appeal his conviction and sentencing.

'Andile Lungisa doesn't know how to spell the word integrity'

In 2017, Lungisa received an endorsement from former president Jacob Zuma as ANC chairperson in Nelson Mandela Bay, despite the party's top 6 taking a decision that he would not be allowed to serve in that position. He had widely campaigned for Nkosazana Dlamini-Zuma to become ANC president.

"Andile Lungisa doesn't know how to spell the word integrity. He is no stranger to personal enrichment. He is also fighting a political campaign to keep himself out of jail and resuscitate the Zuma faction in Nelson Mandela Bay," Olver said.

"It's alarming to see that he was given infrastructure and engineering as that portfolio deals with the Bus Rapid Transfer system and all the City's engineering contracts. There have been big scams going on with heavy duty trucks that get leased through that department."

Whether the DA will regain control of the metro will now likely depend on how it is able to deal with Victor Manyati, who the party dismissed as councillor after he abstained in the vote of no confidence in speaker Jonathan Lawack, allowing him to be removed from the position with one vote.

Bobani's subsequent election was only made possible by including Manyati's vote to get a quorum in the council meeting. But Manyati's membership of the DA and his council seat are still in dispute.

If the DA follows due process, they can appoint a new councillor in Manyati's place and should be able to get the majority back to vote Trollip back into the mayoral seat.

"There's been a fairly stable municipal administration build-up. And it's going to take time for a new mayoral committee to make any major changes," Olver explained.

"The DA have established a largely clean government in Nelson Mandela Bay and they have respected the dividing line between politics and administration. They certainly have stopped the looting but they probably would've needed a full term to prove themselves in terms of service delivery."

We live in a world where facts and fiction get blurred
In times of uncertainty you need journalism you can trust. For 14 free days, you can have access to a world of in-depth analyses, investigative journalism, top opinions and a range of features. Journalism strengthens democracy. Invest in the future today. Thereafter you will be billed R75 per month. You can cancel anytime and if you cancel within 14 days you won't be billed.
Subscribe to News24
Related Links
How to Steal a City: the ANC's desperate election battle in NMB
Next on News24
IN-DEPTH | No one knows how to fix SA or who should be in Ramaphosa's Cabinet - so we asked ChatGPT