Shamba the lion and the Malema effect 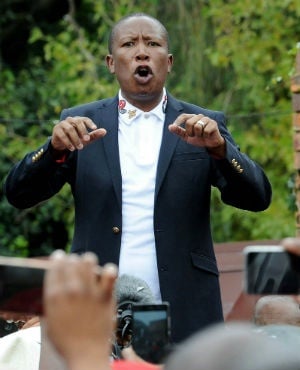 When EFF leader Julius Malema read the news this week that the owner of a Limpopo game reserve had been attacked by one of his lions, he could not let the opportunity pass him by.

"Our lion, Mufasa," he tweeted.

"Did the Lion survive? We are worried about it, please update us. I will listen on the radio if you don't mind…" he later asked News24.

The question appeared innocent, but not to those who know Malema.

Within seconds, people shared his tweet and responded with tweets of their own. Some were outraged because it appeared that Malema valued the life of the lion over that of the game reserve owner, who was almost killed in the attack. Others were genuinely angered by the fact that Shamba the lion had been shot.

Always on its game, "woke" Twitter ran with it. Soon there were memes of lions wearing red berets all over the Twittersphere.

Even though many, even most, comments were made in jest, a hero was born: Shamba the lion, championing the plight of the landless – a political mascot of sorts.

The hashtag #RIPShamba was soon trending. Political capital was mined.

The truth is, Malema might be an astute politician, but he's also a marketing genius and this isn't the first time he has capitalised on newsworthy events to promote the EFF brand.

"From a branding perspective, he hasn't put a foot wrong right from the beginning," says Tony Khoury, a media expert.

"Who will ever forget the EFF walking into Parliament for the first time in their red overalls? The red beret has become a national symbol."

What Malema's been able to do better than any other politician, is to recognise and engage the South African youth on Twitter. Between him and other EFF heavyweights, such as Mbuyiseni Ndlozi, Floyd Shivambu and Dali Mpofu, they've gained a huge following and they are using this to keep their party's agenda in the news and the public eye.

When AfriForum announced that advocate Gerrie Nel would privately prosecute Malema for fraud and corruption, he tweeted: "Bring it on bloody racists, you don't scare me at all. I'm born ready! No white man will decide my destiny, the poor masses of our people will..."

To Malema's followers, it was a rallying call. AfriForum's supporters were infuriated.

A few weeks ago, when Malema spoke at a memorial service held for Winnie Madikizela-Mandela, he asked for a signal from the beyond from the late matriarch about what to do with her critics. It resulted in the #JuliusMalemaChallenge. Within hours, countless Twitter users tweeted, asking Madikizela-Mandela for a sign on how to deal with their respective problems.

This week, the same witty Tweeps did not fail to interpret Shamba's attack as a signal from Ma' Winnie to "take the land".

"Whether he incenses you or you love him, anything Malema touches, turns into social media gold," says Khoury.

"He talks straight, he doesn't care what anyone thinks and he doesn't pull any punches. He has the ability to turn a 140-character tweet in a political beast. And the response is always overwhelmingly positive. There's really only been one time the EFF got backlash on Twitter and that's when they walked out of [Cyril] Ramaphosa's election in Parliament. People said: 'Come on, are you only about walking out?'"

Is it a coincidence that the word "shamba" means land in Swahili? #RIPShamba

Malema's love affair with Twitter and, to an extent, the mainstream media, has not escaped the attention of other political parties and their supporters. Critics say he and the EFF, get a free pass on many issues.

"The EFF does get a disproportionate amount of media coverage compared to its share of the vote," says William Bird from Media Monitoring Africa. "This is to a large extent due to its ability to create controversy and engineer news coverage – something they're brilliant at."

While the ANC, as would be expected, bears the brunt of media scrutiny, and the DA gets its fair share, the internal political workings of the EFF mostly go unchallenged. A recent analysis by the IRR's Gareth van Onselen on the unsettling rate at which EFF MPs resign, barely made headlines.

"Because Malema tends to be the driver of controversy, there's no need for the media to interrogate EFF policy and functions," says Bird.

"A lot of what he says on social media gets picked up by the media, without the underlying assumptions being challenged or his mandate or standing regarding that specific topic being interrogated.

"There's no doubt that Malema is a master of social media. But if the media are going to be quoting him one would expect them to do so, knowing on which basis they are quoting him."

We live in a world where facts and fiction get blurred
In times of uncertainty you need journalism you can trust. For 14 free days, you can have access to a world of in-depth analyses, investigative journalism, top opinions and a range of features. Journalism strengthens democracy. Invest in the future today. Thereafter you will be billed R75 per month. You can cancel anytime and if you cancel within 14 days you won't be billed.
Subscribe to News24
Related Links
‘He has deep bite marks across his whole body’ – Months of rehab ahead for man attacked by lion
Next on News24
FIRST TAKE | Phala Phala findings: Ramaphosa's opponents get what they wanted