Why the listeriosis outbreak is 'just the tip of the iceberg' 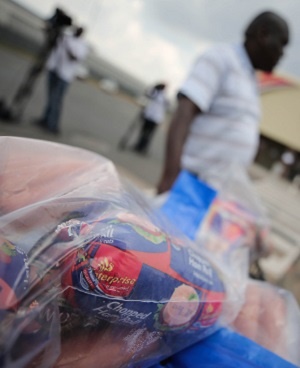 After months of intense research to find the source of a listeriosis outbreak that's claimed the lives of 180 people so far, the Department of Health on Sunday finally named an Enterprise Foods factory in Polokwane as the culprit.

South Africans were shocked to find out what food safety experts have been saying for years: what we're eating could be killing us - our polony and mayo sandwich, our kota with russian and chips, and our beloved polony gatsby.

Bacon, viennas and any cold cut meat also came under suspicion, with most large retailers taking all Enterprise Foods stock off their shelves.

Minister of Health Aaron Motsoaledi warned people not to eat any of these products for the time being, and throw away all products they may have bought in the past months to prevent getting sick.

But, according to experts, the listeriosis outbreak is just the tip of the iceberg of diseases being caused by poor quality food consumed by millions of South Africans every day.

"There are two things that make South Africans vulnerable to something like a listeriosis outbreak. Our cultural context and the way the food processing and retail industry is structured," says Florian Kroll from the Institute for Poverty Land and Agrarian Studies (PLAAS), who's written extensively on food consumption patterns in South Africa.

"In South Africa's cultural context it's important for people to eat meat. It's a status thing to be able to show that you've arrived and can afford meat. But, in the context of poverty, people choose meat products they can afford. Most of the time that means cheap, processed meat."

'Food industry is killing thousands of people every year'

With a beef fillet costing you R194 per kilogram in August 2017, according to Stats SA, and the average price of beef mince rising by 13.2% (from R68 to R77 per kilogram) between 2016 and 2017, and in a country where 30.4 million people live in poverty, it's no wonder the consumption of dodgy meat products are the order of the day.

"The food industry is killing thousands of people every year with ultra-processed foods that are made with multiple additives and derivatives, and formulated to hit the sweet spot to make it really tasty. It's usually packaged to last long and a lot of these foods cause hypertension and obesity, which kills a lot of people," says Kroll.

According to Dr Jane Battersby-Lennard from the African Centre for Cities, at the University of Cape Town, at least 60% of Cape Town’s population cannot afford what the Bureau for Food and Agricultural Policy (BFAP) has calculated to be a balanced plate of food.

According to the Pacsa Food Price Barometer, the actual cost of feeding a child a basic, but nutritionally complete, diet is between R540 and R682 per month. With the child support grant (R380 per month) currently set below the adjusted food poverty line of R531 per month, there's simply no way parents can serve their children proper meat.

"The urban poor are very dependent on processed meats as a source of protein, not only on the basis of their relatively cheap price, but also their convenience in the contexts of time poverty and energy poverty," says Battersby-Lennard.

"The kota is a major street food in all our cities, and polony, russians, etc. are a core element of these. These highly processed meat products are, therefore, central to the diets of the urban poor."

At the same time, the food processing and retail industry is structured in a way to make maximum profit off poor people, with the major processing companies having been targeting entry into "Bottom of the Pyramid" markets.

"Tiger Brands have been particularly active in marketing to the informal sector market," she says.

According to Kroll, the industry is structured in such a way that there's a high concentration and consolidation of ownership, which means it is dominated by only a handful of big players.

"Most food outlets are interested in maximising profit, and that means they're sourcing their products from global markets. In the listeriosis case, it's been linked to cheap derivatives from other countries. We're seeing more and more of this due to trade agreements South Africa has signed, and we're getting a whole lot of cheap products imported from countries like the United States and Brazil.

"Because the industry is so small, when there is a contamination, it's likely to be distributed very widely and so it's very difficult to maintain consumer safety."

So how do we prevent more illnesses from breaking out and the erosion of long-term health?

Experts say it is a combination of stricter industry regulation and the promotion of sustainable and just food consumption.

"Policy makers, change agents and researchers need to be aware of the factors that influence the way people consume food: both the economic factors, but also the values, identities and aspirations people in their behaviour," reads a policy brief by PLAAS on the foodways of poor people.

"While Big Food reaps big profits, it is the poor who shoulder the growing burden of poor health, stunted development, reduced educational attainment and productivity, and ultimately it is they and the state who foot the bill for cheap food."

We live in a world where facts and fiction get blurred
In times of uncertainty you need journalism you can trust. For 14 free days, you can have access to a world of in-depth analyses, investigative journalism, top opinions and a range of features. Journalism strengthens democracy. Invest in the future today. Thereafter you will be billed R75 per month. You can cancel anytime and if you cancel within 14 days you won't be billed.
Subscribe to News24
Next on News24
IN-DEPTH | Blocked sewers, spread of disease a possibility if water shedding continues, warns expert