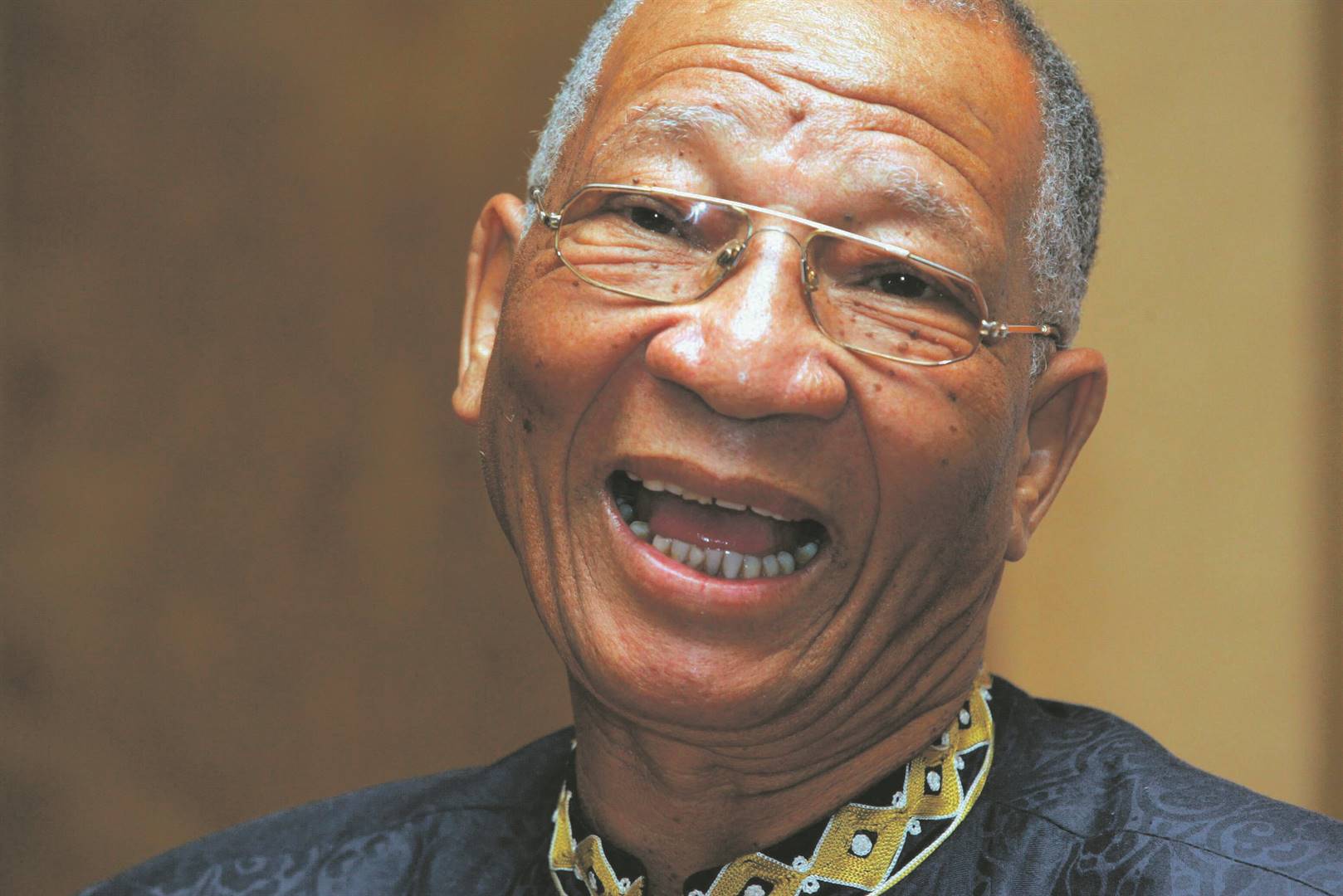 The death of Don Mattera, aka "Bra Zinga", the world-renowned poet and author, was a sudden and a huge blow to me. I knew that he was not well and frail at the age of 86, but not that he was so gravely ill that he could die at any time. It was, therefore, very shocking to get a call an hour or two after he died.

Mattera, who I have known for about 53 years, was introduced to me by my late brother, the famous Rashid "Dynamite" Khan (why we have different surnames is a long story), who played for Orlando Pirates, Pretoria Sundowns and Cape Town Spurs and was on trial with Leeds United in the UK in 1969. This introduction took place round about 1970 at the Oval Stadium in Western township, when Mattera was very involved with soccer, a game he always loved, which not many people knew. From right to left: Ebrahim Harvey's brothers Robbie with his daughter and Ahmed alongside Don Mattera and Ebrahim Harvey in Coronationville in 1973.

But he also focused a lot on soccer while living in Western because it was by far the most popular sport there, as it is in all other black working-class townships in Joburg and across the country, in fact.

That is why Mattera used the game of soccer to try and bring the notorious gangs, like the Spaldings and the Fast Guns, together and end the chronic and devastating violence that gangsterism had spawned and plagued Western for many years, especially during the 1970s.

At the time, around about 1970, and having earlier left the much-feared Vultures gang, which was based in Sophiatown and of which Mattera was the leader, he joined the Labour Party. But realising the need for a wider political identity, he left it and joined the Black Peoples Convention (BPC), which was the umbrella body and leader of the black consciousness (BC) movement, which I too joined in 1976, after the Soweto student uprisings.

A household name for decades, detained often, banned (1973-1982) and house-arrested under apartheid, the man was unbowed and undaunted during those dark days, so much so that he told me that there were times when he took off his shoes to relax while he was being interrogated by the then notorious security branch about his political activities.

During those days, I had not seen anyone more popular in the coloured townships of Johannesburg. It was even harder to walk with him in Johannesburg's CBD, where many people would stop to greet and talk to him.

No matter the circumstances, even when we were in a hurry to get to some place, he would greet and talk a bit to everyone, and had an astonishing memory of the personal details of people he knew. So popular was he then that if he had stood as a candidate for any party in an election, especially in any of the coloured working-class townships, he most probably would have won.

However, what many or most people don't know is that Mattera was also a member of the Pan Africanist Congress (PAC) and its military wing, the Azanian People's Liberation Army (Apla). But he managed to straddle both Pan Africanism and the BC movement because he did not see major differences between them in relation to the anti-apartheid struggle and its goals of the abolition of apartheid and the creation of a non-racial and anti-racist constitutional democracy.

It was, however, his conversion to Islam in the early 1970s which appeared to bring out from him a greater emphasis on our common humanity and the corresponding need for compassion among human beings, especially among the downtrodden black working-class majority which racist apartheid had most dehumanised. Compassion was a theme which dominated his conversations with me over many years, which he bore with him until the end.

But the Mattera I know, as much as he was himself aware of the enormous contribution he made to both the anti-apartheid struggles and to post-apartheid SA, would not have countenanced anyone paying completely uncritical homage to him after his death. He had, like all other human beings, several failures and weaknesses, one of which was an immense and very intense sense of himself, to the point where he told me more than once that he was a genius.

My retort was that he should let others say that he was a genius if they so wished, rather than he himself making such self-praising remarks. Whenever we had such exchanges, he would sometimes, but not always, give me a wry smile, which was somewhat an acknowledgement of my point, without him explicitly saying so.

I firmly believe that we do an injustice to the complexity of people, life, history and the notion of "truth" itself when in obituaries, we are totally praiseworthy of anyone who has died and deliberately omit saying anything which is negative or critical. The same point applies with equal force to the death late last week of ANC deputy secretary-general Jessie Duarte.

No, that is a hagiography I am absolutely certain Mattera would not agree with, because it pays an undue and excessive saintly-like reverence in tributes to the deceased. Though we were very close for decades, we had many disagreements and arguments about many things, including about religion and Islam itself.

READ | TRIBUTE: Vuyo Mvoko - Don Mattera made me what I am today

However, what I can say with equal certainty is that not once can I recall, in the 53 years that I knew him, that he was rude and never once too, did he use expletives, even when he was very upset about something. I think his uprighteous upbringing at a Catholic boarding school in Durban in his youth contributed towards instilling in him such an abiding respect for other people.

However, there exists a political dynamic about Mattera which any obituary of him would be seriously limited if it did not draw attention to this matter. In this regard, on the eve of the Covid-19 pandemic in South Africa, in January 2020, in a tribute to Mattera, who had turned 85 in December 2019, in The Sowetan, I pointed out that he was not given the credit and recognition by the ANC government which he certainly deserved. He was honoured, however, at a huge gathering in Eldorado Park on the 1 February 2020.

I pointed out in that article that this aversion of the ANC government towards Mattera, who did not and resisted becoming a member of the ANC for all his life, was nowhere more evident than in the fact that all his attempts to get some of his works recognised, appropriated and used by the department of education had failed repeatedly, even though he had won numerous awards, both locally and globally, for some of them over many years.

I also wrote in The Sowetan tribute to him:

Today, the man who has devoted his life to the struggle against apartheid is a bit frail, but the embers of the lucid, powerful and evocative poetry and compassion he embodies continue unstoppably to flicker.

That flickering stopped when he died while sitting in his lounge at his home in Protea in Soweto on Monday morning.

At this time of very painful mourning at his death, I think his 1987 work, Memory is the Weapon, which I regard as the best work on the history of Sophiatown by someone who was born and lived there, epitomises how I think history will treat Mattera's legacy. He leaves a formidable literary legacy for future generations of poets, writers and community activists to imbibe and draw lessons from for determining a fundamentally different future.

In conclusion, I must say that Mattera was often very unhappy with the growing, worsening and multifaceted crisis we have been experiencing in this country over the past decade, in particular under this ANC government, especially the suffering of children and the youth, which was his big focus in the last decade of his life.

He was particularly incensed with the socioeconomic conditions of great poverty, unemployment and related social miseries, including rampant drug-peddling, gangsterism and crime in coloured working-class townships, especially since he was born and lived in these communities all his life, particularly, places like Westbury, Newclare, Kliptown and Eldorado Park.

- Dr Ebrahim Harvey is an independent political writer, analyst and author of The Great Pretenders: Race and Class under ANC Rule, published by Jacana in May 2021.

We live in a world where facts and fiction get blurred
In times of uncertainty you need journalism you can trust. For 14 free days, you can have access to a world of in-depth analyses, investigative journalism, top opinions and a range of features. Journalism strengthens democracy. Invest in the future today. Thereafter you will be billed R75 per month. You can cancel anytime and if you cancel within 14 days you won't be billed.
Subscribe to News24
Next on News24
Ebrahim Harvey | Non-racialism, tribalism concerns in the ANC weighed heavily on Jessie Duarte