Joe Kitchen | The soundtrack of a failed revolution Joe Kitchen reflects on the crunching wheels of the shopping trolleys on tar streets, which he writes has become the symbolic soundtrack of everything that has gone wrong with South Africa.

They're getting closer. I can hear them in my dreams at night.

They are the first thing I hear every morning, when I open my eyes.

That awful rattling sound. The much too familiar soundtrack that is symbolic of everything that has gone wrong in South Africa during the last few years.

The crunching of the wheels of the shopping trolleys on the tar streets.

I listen to them as they travel from one dumpster to the next, from rubbish heap to rubbish heap.

Rush hour of the homeless.

We are surrounded by the implements, the methods of conveyance designed by capitalism. But these are no longer the tools used for buying groceries in a supermarket. Who has money for that, anyway? Shopping trolleys – and, sometimes, the odd airport trolley – have assumed a new function in this country. 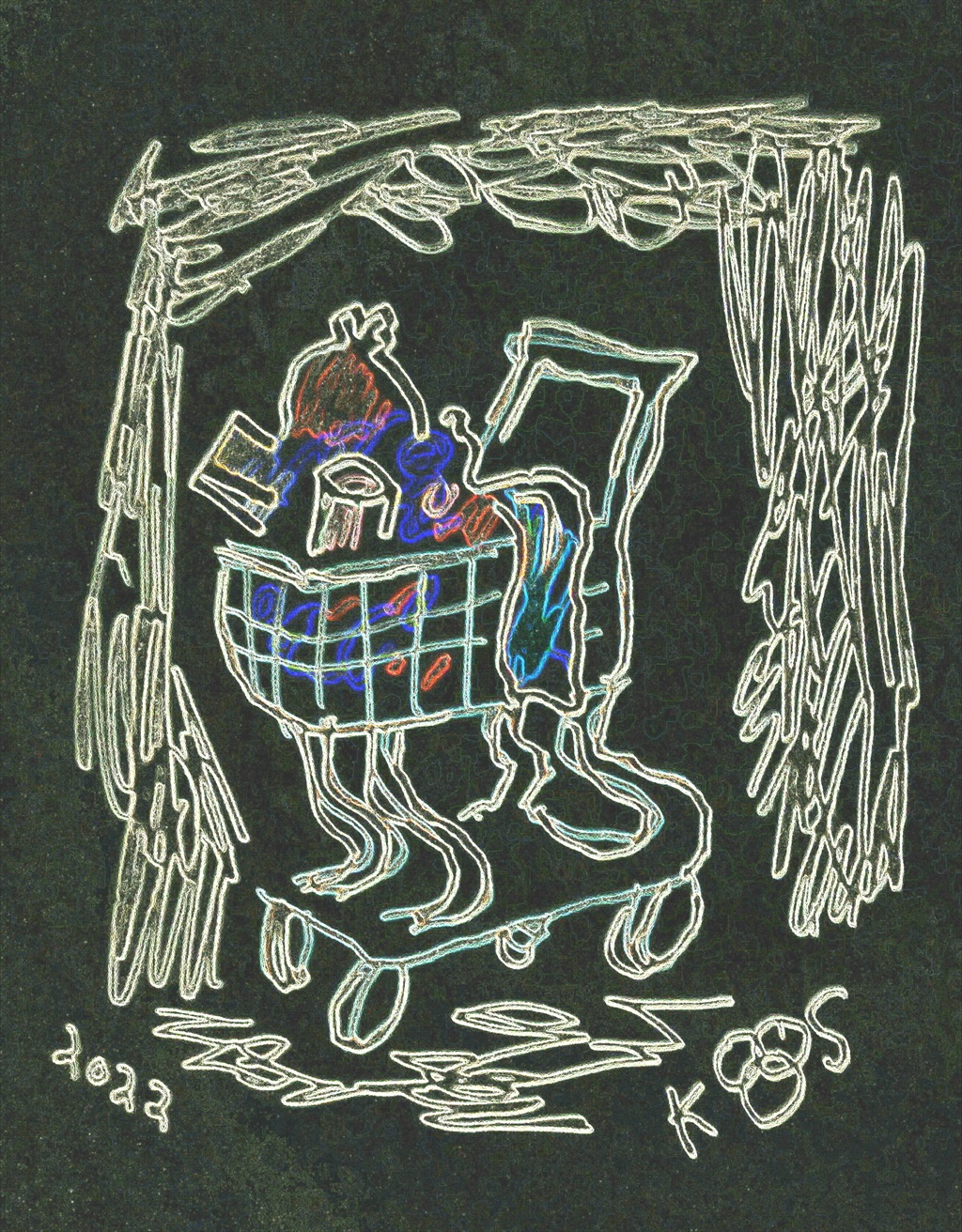 The brink of destruction

This country, that has been driven to the brink of destruction because of ANC policies (if one can call them 'policies').

Isn't this the greatest of ironies? Capitalism is being destroyed, but not because the government has successfully implemented the socialist ideals. Capitalism is simply being eroded by incompetence.

The ANC doesn't even have to make new laws to inhibit free trade. The governing party is inhibiting free trade by its very presence and sheer clumsiness.

The shops are running empty, while the trolleys remain.

Mornings and evenings, the never-ending sound of those rolling wheels as they are pushed through darkened streets where the lights no longer work, carrying their meagre possessions and their cardboard boxes and the leftovers of other peoples' meals, navigating their lonely way past locked houses and burglar-proof fences. This is the place where their dreams of freedom have come to die.

And this is probably why the ANC is sending its last cents to Cuba; it doesn't have the know-how to spend it on local improvements.

It is shortly after sunset in the middle of a week. It is winter. It is the prime time for watching TV. During this hour, our favourite game shows usually air on Channel 120. Unless, of course, the TV's chatter is silenced by load-shedding, as is often the case.

Ag, we're probably not missing all that much, are we?

It's just us, and our candles, shut up and barricaded in our dark two-storey-house, imprisoned by Eskom.

I wonder: is this how people felt during the nineteenth century, before electricity, when they had nothing but the moon and stars to look at after dark?

Passing time in the dark

How did they pass the time? I wonder.

They probably told each other ghost stories. Perhaps they sang folk songs. Bible study comes to mind. I'm not sure.

All that feels like such a long time ago, another era.

Nowadays, we are clueless. We don't know how to handle darkness.

We stare at dead TV screens, and we listen to the shopping trolleys rolling by.

Am I imagining it, or does it sound as if they're all rolling downhill?

Spiralling downwards, slowly but surely, towards their doom, towards a failed state?

It's like listening to the ominous first bar of Beethoven's Fifth, the notes going lower, the crescendo of revenge, the booming and threatening mayhem of a symphony describing a country falling into inevitable disrepair.

And, in the distance: police sirens. Somewhere, a generator kicking in. The ringing of our doorbell at least twenty times a day, and when we open the front door on a tiny crack, it is to face yet another begging pair of hands, and hear yet another sad life story, horrific tales of disappointment and gloom, one after the other, all the same.

The black dog of depression

And, let's face it, we are afraid.

Sometimes we feel better for a while, though.

But we know it will be back.

The TV might be blaring senseless nonsense right now, but, sometime very soon, it will relapse into silence again.

And, even in these hours when the lights work, we are surrounded by abnormal noises. The oven makes peeping sounds, the washing machine and the alarm system too. Everything is out of sync. The pool pump doesn't know what time it is, and the creepy-crawly is forever getting stuck in the same corner of the pool. We watch the news at night, only to see the rand losing value, the price of commodities going haywire, all the arrows are pointing downwards.

Because that's where we're going. That's where everything's going. Down.

READ | Joe Kitchen: Redefining the idea of the 'Rainbow Nation'

You try to encourage yourself. You read a good book. You watch a lekker movie on Netflix. You save money by lighting the fire with dried-up teabags soaked in paraffin instead of Blitz. You cancel your membership of the gym and you buy a cheap pair of tekkies because you have decided to take up jogging. When you're in a good mood, you hand bread to the beggars at the traffic lights.

But they always come back to haunt you. Those sounds.

Late at night, with your head on the pillow, you can still hear them.

The crunching of metal wheels on tar.

And you realise: sooner or later, the trolleys are coming to get you.