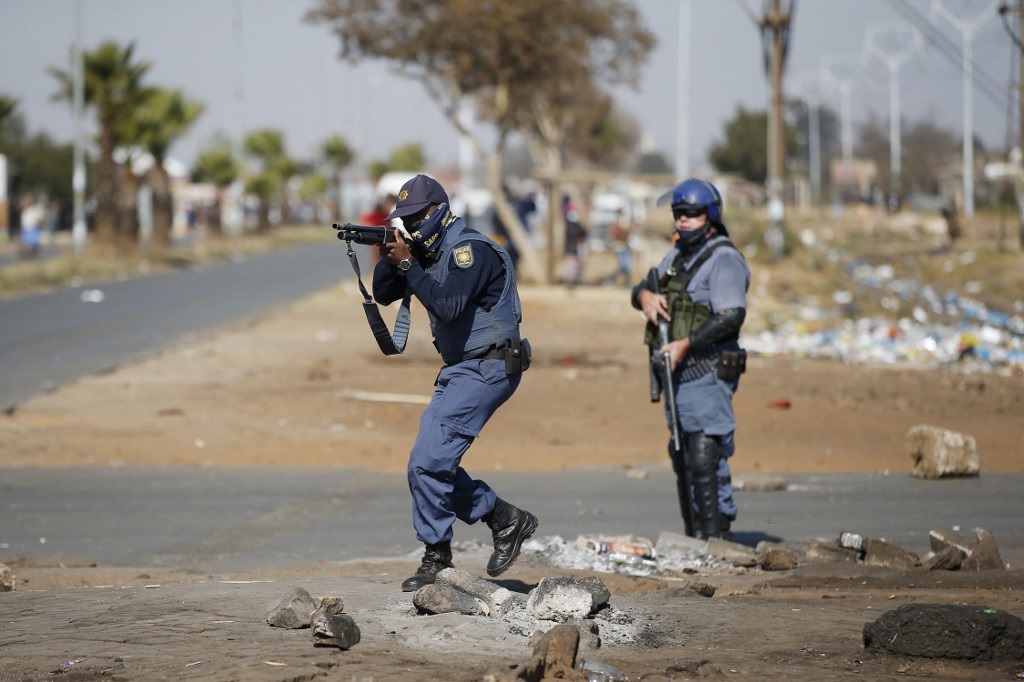 A member of the South African Police Services (SAPS) aim at looters following sporadic looting and vandalism outside the Lotsoho Mall in Katlehong township, East of Johannesburg.
Phill Magakoe/AFP

It is difficult to move forward with the country’s Infrastructure Build Programme when we leak billions of rands due to violent protests that destroy infrastructure, writes Kgosientsho Ramokgopa.

In the last two weeks, the country has watched with great shock the devastation caused by the rapid spread of sporadic violent protests affecting mainly two of the country’s most populous provinces, Gauteng and KwaZulu-Natal. These protests have primarily taken the form of destruction of property and looting targeted at shopping malls, warehouses and delivery trucks.

While the geographic spread of the protests may seem miniscule, the seemingly coordinated attack of the productive economic nodes, collectively accounting for 50% of the country’s Gross Domestic Product (GDP), has caused significant disruption to the national supply chain of goods and services, threatened employment and job security. These actions have plunged many businesses into further crises and severely dented investor confidence.

The messaging around the protests has not always been clear as there is no identifiable leader of the protests or a single cause. However, it is worth unpacking, albeit not in great detail, the political, economic, social, technological, legal, and environmental variables to better picture what we may be dealing with as a country.

The political, economic and social indicators show that the lack of jobs, increased unemployment, especially among youth, an ailing economy, compromised municipal revenues, racial tensions, and dissatisfaction with political leadership, in general, are massive contributors to the current protests. In addition, the pervasive use of technology through social media, as a dominant source of information, at times spreading false propaganda has proved to be an effective mobilising tool in these protests. Lastly, the environmental impact of these protests will be felt long after the protests have died down, the fires and resultant air pollution, the chemical spills and the destruction of crops will have adverse impacts on the agriculture sector.

Subsequently, the State Security Agency has gone on record to state that further destruction of public infrastructure would have taken place had they not intervened swiftly. This is unfortunate because the State bears enormous direct costs in the replacement of demolished infrastructure and the deployment of law enforcement agencies to restore order. There are also indirect costs to the State born by a halt in productive time of many economically active individuals during these protests.

We can draw important lessons from previous instances of civil unrest and protest in the country that have cost the State resources and time. Violent protests will undoubtedly derail the infrastructure programme of the country and negatively affect investor confidence.

The National Development Plan advocates for Gross Fixed Capital Formation (investment) to be 30% of GDP to enable the realisation of the 2030 aspirational targets, with the private sector accounting for two-thirds of this investment target. We, therefore cannot underestimate the importance of striking the balance between the Constitutional rights to protest and the need to preserve both private and public infrastructures.

As an example, in 2016, the community of Vuwani in the Vhembe District Municipality faced widespread protests and destruction of infrastructure. At the time, 24 schools were reported to have been either damaged or destroyed during the protests. The amount of resources spent on replacing torched schools would have built 17 new schools. This is besides the satellite police stations, tribal offices and municipal trucks that were burnt down.

Another example is the Mtentu bridge construction project that is part of the N2 Wild Coast in the Eastern Cape, which commenced at the beginning of 2018 but came to a sudden halt early in 2019 due to site disruptions by the local business forums. The disruptions resulted in the contractor terminating the contract.

At the time the construction was stopped, only 18% of the total contract value of R1.82 billion had been spent. A high level macro-economic evaluation indicates that there is a massive cost to the economy caused by this stoppage; R680m lost in Gross Value Added (direct impact), approximately 3 000 job direct jobs lost and R300 million in income (direct impact) lost. This excludes the additional direct cost to the State of the difference between the old contract price of R1.82 billion and a new contract price that the new contractor will put in to finish the project.

The new contractor will include the risk of disruptions and the ownership of the construction works completed by the old contractor at their contract price. This delayed construction further undermines the efficiency of the transport network and increases the costs of getting goods to market and the ability of the local people to access opportunities.

Both examples illustrate the problems with the destruction of much-needed infrastructure.

READ | Clem Sunter: People's Economy or Cautionary Tale: How do we ensure the best scenario plays out for SA

However, the more important and salient point is that the State purse cannot afford to constantly use the fiscal allocations to rebuild destroyed property and infrastructure. In tandem, the State also cannot afford a loss in investments in the form of bulk contributions from businesses, in rates and taxes, in employment opportunities and indirect investments towards massive infrastructure projects that carry commercial benefit.

It is difficult to move forward with the country’s Infrastructure Build Programme when we leak billions of rands due to violent protests that destroy infrastructure.

The occurrences of the past two weeks represent a significant reversal of the gains of the democratic project, demotes South Africa as a preeminent investment destination on the continent, and subtracts from our efforts to unlock private sector liquidity for investment. Having said this, these setbacks are not fatal; they can be remedied and course-corrected by deepening the social compact with social partners, namely: community, labour, and business. This must be a signal to the urgent need to elevate our level of ambition and aggression in the pursuit of the transformation and reconstruction project that should result in the improvement of the lived experiences of our people, especially the poor and marginalised.

- Dr Kgosientsho Ramokgopa is the head of Infrastructure and Investment in The Presidency.