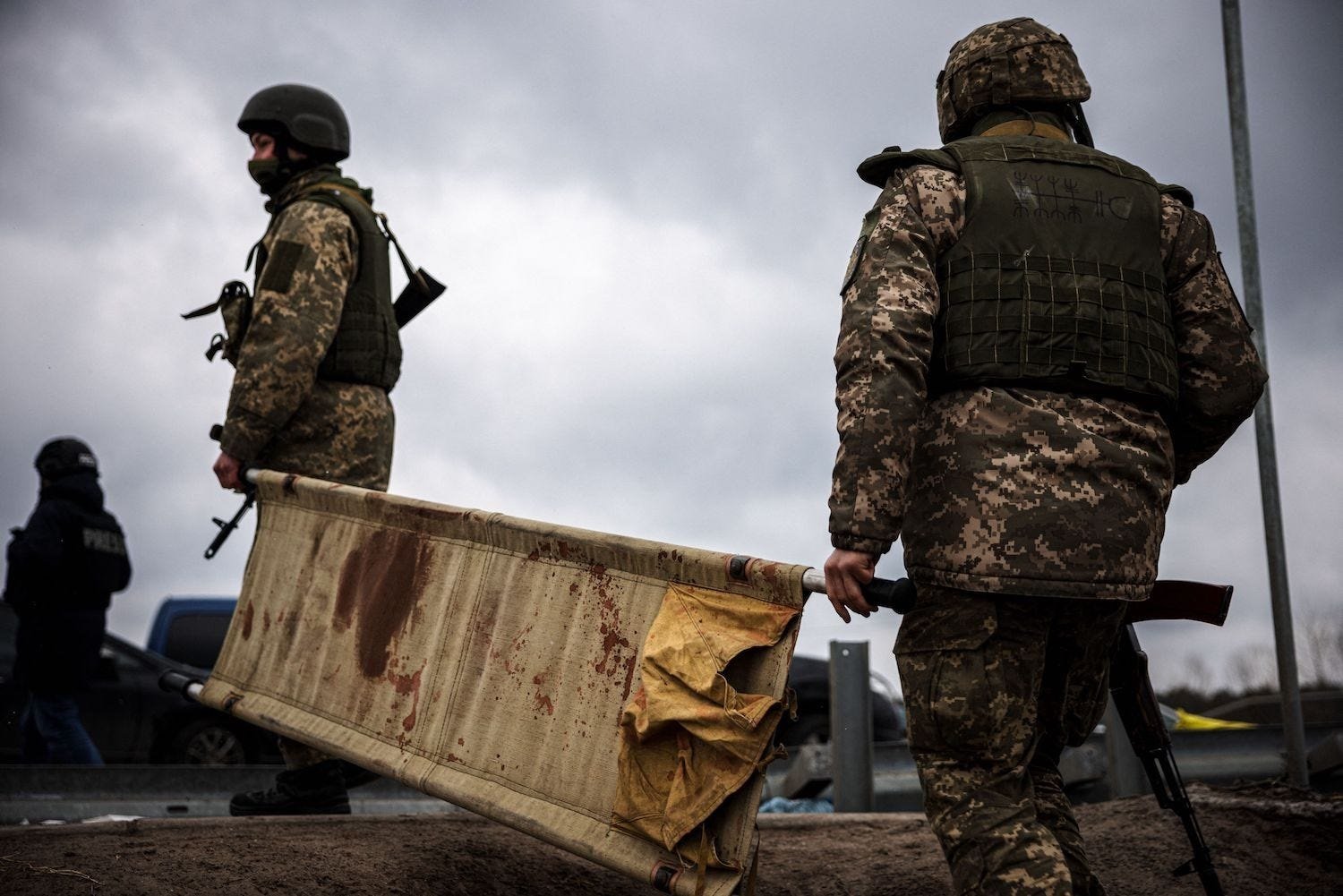 Ukrainian troops with a blood-stained stretcher near the city of Irpin, northwest of Kyiv, March 13, 2022. Dimitar Dilkoff/AFP via Getty Images

Six months after Russia's invasion of Ukraine, it is vital that the international community continues to stand up for the UN Charter and global peace, writes Ukrainian ambassador to South Africa Liubov Abravitova and British High Commissioner to South Africa, Antony Phillipson.

24 August marks the 31st anniversary of Ukraine’s independence. It should be a time of celebration as it is for countries around the world on their national days. But this year is marked by tragedy. Six months ago, Russia launched its brutal, illegal invasion of the sovereign nation of Ukraine.

For Ukraine, 24 August is normally a day to celebrate the adoption of the Act of the Declaration of Independence (1991), which affirmed the inviolability of Ukraine's territory and its right to its own citizenship and foreign policy. It also committed Ukraine never to accept, produce or purchase nuclear weapons. This declaration was the basis for Ukraine to give up the third largest nuclear arsenal in 1994 and to be a proud, internationally-engaged country committed to global peace, democracy and the principles of the UN Charter.

Ukraine's independence is now under threat. It began with the illegal annexation of Crimea in 2014. Then six months ago, President Putin launched an unprovoked, full-scale attack on Ukraine.

Since then, Russia has committed horrifying atrocities against Ukraine's citizens. The OSCE's Moscow Mechanism report concluded that:

International human rights law (IHRL) has been extensively violated in the conflict in Ukraine. Some of the most serious violations include targeted killing of civilians… unlawful detentions, abductions and enforced disappearances of such persons; large-scale deportations of Ukrainian civilians to Russia; and various forms of mistreatment, including torture.

The UN Human Rights Office has recorded 12 800 civilian casualties so far, with the expectation that real figures are considerably higher. At least 366 healthcare centres have been attacked, and over 2 200 schools destroyed. 12.8 million Ukrainians have been forced from their homes, with 6.2 million, mostly women and children, now living as refugees in other countries. The impact on children has been particularly acute.

Russia has repeatedly tried to hide its actions behind propaganda. In 2014 it lied about its invasion of Crimea, recognising it only a year later. In 2022, it has sought to describe the appalling full-scale invasion as "a special military operation" and, despite all evidence to the contrary, continues to lie that its army is not targeting civilians or residential areas. It has breached Ukraine’s territorial integrity and tried to deny the country its right to self-determination. It has destroyed civilian infrastructure and abused the population. Captured men have been castrated and killed. Women and children have been raped.

Russia has falsely claimed that its invasion was necessary because of a threat posed by NATO on its borders. This is wrong; NATO is a defensive organisation that poses no threat to Russia. Instead, it is President Vladimir Putin’s actions against Russia's neighbours, including its illegal attacks in Ukraine and Georgia, that have motivated countries to seek to join NATO's defensive alliance.

Russia's actions in Ukraine continue to pose threats to the wider world. Its invasion of the Zaporizhzhya Nuclear Power Plant has significantly raised the risk of a nuclear accident or incident. Its blockade of Ukrainian ports and attacks on farming infrastructure have exacerbated food insecurity for millions of people, particularly in Africa. And the possibility of sham referenda in eastern Ukraine risks further violating international norms.

Unlike Russia, Ukraine is a peace-loving country and has never attacked any independent state. Most importantly, in the multilateral world of the 21st century, it is Ukraine's right to choose its allies and partnerships that help it defend its borders from Russia's or anyone's aggression.

We share a common desire for Russia's invasion to end quickly and for peace to return to Ukraine. To achieve this, Russia should immediately withdraw its troops to create space for diplomacy. In the meantime, the UK and others will continue to support Ukraine and resist Russia's unjustified aggression.

Six months after Russia's invasion, it is vital that the international community continues to stand up for the UN Charter and global peace. Defending a country's right to exist is a challenge that we all must face together if we are to build a world based on peace and the right of sovereign nations to chart their own future. The best gift we can all give Ukraine on its Independence Day is solidarity with its desire for freedom and democracy.