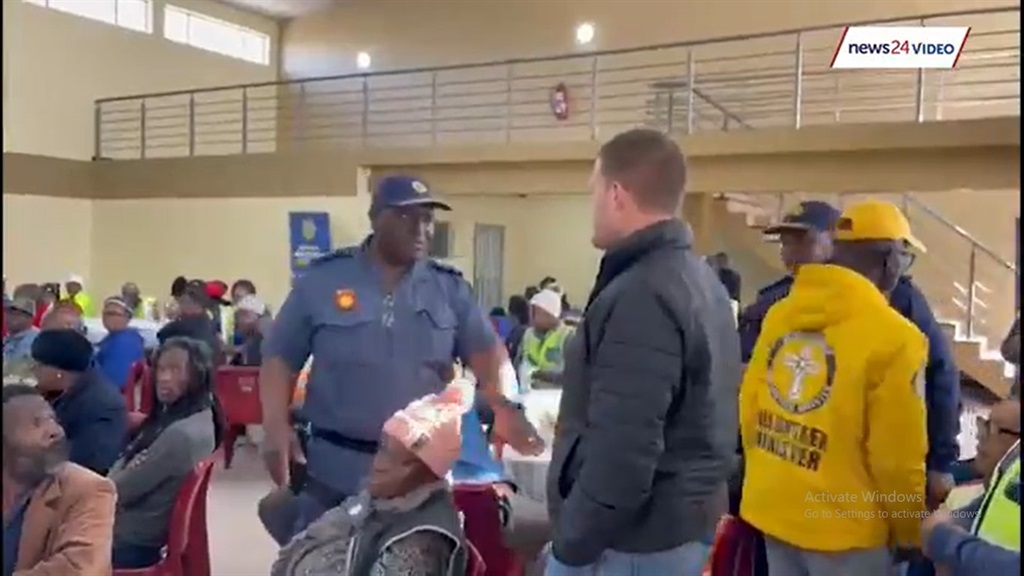 Marius Roodt reflects on the recent confrontation between police minister Bheki Cele and activist Ian Cameron, writing that if Cele wants the police to win the war on crime, it cannot be 'business as usual'.

The bizarre confrontation in the Western Cape between police minister Bheki Cele and Ian Cameron, a community activist from Action Society, a civil rights organisation with a focus on safety and security, was very revealing.

Footage first emerged on Twitter showing Cameron confronting Cele at a community meeting in Cape Town, saying that the people of that province, particularly in townships, are neglected – not just in terms of security but also in terms of broader infrastructure. Cameron related how few people felt safe in these areas and also described how he had witnessed a young boy defecating in the street simply because of a lack of infrastructure as he had nowhere else to go.

This set off a bizarre rant by Cele, who seemed to be channelling former President PW Botha, waving his forefinger indignantly as he raged at Cameron. He accused Cameron of regarding him as a 'garden boy,' although Cameron had addressed Cele only as 'sir' and 'mister'. Cele also brought up his struggle credentials, saying that he had spent time on Robben Island to bring human rights to South Africans (it was not clear what relevance this had to Cameron's comments).

Cameron was eventually physically removed from the meeting, with several police officers being tasked to take him away.

WATCH | 'Shut up!' Cele rips into lobby group leader, then police drag him away

There are two things one can take away from this encounter.

The first is that Cele's reaction was not one that you would expect from a member of a confident or forward-looking government. Cele's accusation of racism against Cameron on a flimsy pretext, along with his irrelevant recounting of his struggle history, are a microcosmic reflection of how Cele's party, the ANC, functions.

Instead of looking to the future, it looks to a glorious past (with some achievements of this past often being exaggerated to some degree). And at the same time, it often points to South Africa's history of racist exclusion and discrimination to distract attention from its own failures. While some of South Africa's problems are certainly a legacy of colonialism and apartheid, the further we move away from 1994, the clearer it becomes that many of the issues in this country today are because of the ANC's failures. However, the ANC (and many of the people who represent it, such as Cele) cannot accept this and rely instead on bluster and crass race essentialism to cover up for their failures.

The other thing to note from this exchange is that Cameron was quite correct in his assertion that people feel left behind in South Africa, not least by the police, especially those in the Western Cape.

The latest crime figures, released by the police themselves, show that the number of murders in the country has now reached its highest level since the 1990s. And this is significant; the number of murders as well as the rate of murders reached a peak in the mid-1990s, as the country emerged from the darkness of apartheid. However, thanks to efforts across many sectors of society, not least the police, murder started trending downward. And this was the case until about 2010, around the time President Jacob Zuma came to power. There is no need to rehash the trail of destruction left by President Zuma, but one of the institutions he helped hollow out was the police, which saw a related rise in the rate of crime.

And the Western Cape features here again – according to the most recent figures from the police, five of the ten most dangerous places in the country, in terms of the number of murders, are in this province. More ammunition for Cameron to show that he was correct in taking up the cudgels for the people of that province.

And South Africans are increasingly distrustful of the police. Various surveys show that fewer people each year report crimes to the police, partly because of a lack of trust, and also because people simply do not believe that the police will even solve the reported crime. A survey conducted by polling company Afrobarometer asked South Africans about their levels of trust in seventeen institutions. The police were found to be the least trusted of any of the institutions that respondents could choose from.

Another survey conducted by the Centre for Social Development in Africa, based at the University of Johannesburg, produced a similar finding. Respondents were asked about their trust levels in eight institutions – here, the police fared slightly better, being only the second-least trusted institution.

It is clear that there are serious problems with the police in South Africa; crime statistics as well as these various surveys on trust in the police serve to bear this out.

But how can the police be fixed?

Previously the Institute of Race Relations have proposed a number of solutions in our various Broken Blue Line reports, which examine how well the police are functioning and flag failings. These include interventions such as strengthening bodies such as IPID, improving the links between the police and community policing forums, decentralising decision-making in station leadership, allowing communities to directly elect station commanders, and depoliticising the appointment process.

Need for a provincial police force

Something else that deserves serious thought is the devolution of control over the police. Although the Constitution speaks of only one national police force, the establishment of provincial police services is not expressly forbidden, and this is seen in practice, in the municipal police forces in some of our metros.

If Bheki Cele and the ANC are serious about serving the people of the Western Cape, they should not oppose attempts to establish a provincial police force in that province, or in any other province which seeks to do so.

If Cele and the police want to win the war on crime, they cannot count on 'business as usual'. It's time to look at other ways of doing things. And the solutions are out there. It's time to try them.

Marius Roodt is a writer and senior analyst at the Institute of Race Relations.

We live in a world where facts and fiction get blurred
In times of uncertainty you need journalism you can trust. For 14 free days, you can have access to a world of in-depth analyses, investigative journalism, top opinions and a range of features. Journalism strengthens democracy. Invest in the future today. Thereafter you will be billed R75 per month. You can cancel anytime and if you cancel within 14 days you won't be billed.
Subscribe to News24
Next on News24
OPINION | Adam Craker: SA ahead of the world for once – but it's nothing to be proud of