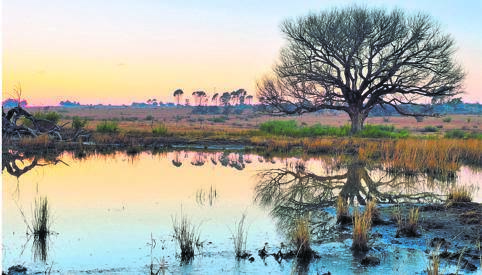 The author writes that wetlands are disappearing even faster than forests as they are subjected to various pressures, including pollution, drained for cropping and mining. Dave Ross, a photographer from Kroonstad, captured this sunrise near this dam, in an area known as the wetlands.

The water crisis, biodiversity loss and impact of climate change continue to occupy the top five risks faced by humanity, writes Bonani Madikizela, and it has a massive impact on the economy.

The Ramsar Convention is known to annually remind the international community of the importance and role played by wetlands in the well-being of the society and economy.

Wetlands in 2021 are celebrated under the Theme: Wetlands and Water.

The Ramsar secretariat summarises the 2021 celebrations by tying it all in a simple statement:

"We are in a growing water crisis that threatens people and our planet. We use more water than nature can replenish, and are destroying the ecosystem that water and all life depend on."

The same sentiments are held by the UN World Economic Forum's risk list.

The water crisis, biodiversity loss and impact of climate change continue to occupy the top five risks faced by humanity. Indeed, the global community use of water for various reasons continues to be unsustainable.

In 1971, 50 years ago, the Ramsar Convention was established to provide a protective voice to the wetlands of international importance.

In the same year, the Water Research Commission was established to generate knowledge central in the wetlands management, through informing drafting of the legislation, which nowadays include the National Water Act, National Environment Management: Biodiversity Act and many more.

This year, 2021, these two organisations are celebrating 50 years of tireless investment in the sustainable development and management of wetlands.

Despite their water security role, facilitating resilience to climate change, wetlands are disappearing even faster than forests as they are subjected to various pressures, including pollution, drained for cropping, mining, etc. These natural sponges are unique in holding and slowly replenishing rivers and aquifers, particularly during times of drought.

Globally, more than 80% of the population live under threatening water supply due to pollution, where about 2.2 billion people do not have safe drinking water, let alone proper sanitation.

As if pollution was not enough pressure on our water resources, lowered ground water levels due to severe evapotranspiration from alien invasive eucalyptus, wattle, pine trees, and frequent droughts led to the burning of our special wetlands called peatlands. These peatlands are particularly important in carbon sequestration because they store more decomposed organic matter than general wetlands do.

The same trend reported on ecosystems degradation is recorded in South Africa as well.

Between 70% and 80% of our wetlands are threatened (NBA, 2019). Projecting this to 2050, as the urbanisation and global population escalates, 14% more water will be needed to produce 70% more food for an estimated 10 billion people. South Africa is projected to have a 17% water supply shortage by 2050.

These realities have forced global communities to pay more attention to green economy recovery strategies, where water and biodiversity are central to sustainable development.

UNEP, through the World Economic Forum, reminded the business society that no economy will prosper on a sick earth! In a country where the economy is already highly depressed, with unemployment estimated above 30% and still worsening due to job losses resulting from the impact of Covid-19, these challenges are disastrous.

Unhealthy ecosystems (or degraded ecological infrastructure) such as these cannot be expected to continue providing services that benefit society and economy. There can never be prosperous economy, where water and biodiversity are under such pressure, and dams are silting up due to soil erosion from poorly managed landscapes.

Fish, amphibians, birds, and numerous plants and invertebrate species survive in wetlands (40% of global species depend on wetlands), providing the attraction that South African Tourism is well known for - the beauty!

There are already reports, led by the Water Research Commission, which provide evidence that tourism in SA is in decline, a shocking reality to small businesses.

Many wetland plant species are a great source of medicine, particularly to marginalised rural communities. Indeed, recent studies show there is an expanding cosmeceutical market from these plants, which can only be jeopardised by climate change and pollution, resulting in biodiversity loss.

Fortunately, over the last 50 years, the Ramsar Convention and Water Research Commission, in partnership with several nature-caring organisations, have provided tested solutions to reverse the wetlands ecosystem degradations, mainly restoration, monitoring and its wise use.

In SA, the Water Research Commission has led the mapping of wetlands and is still going ahead with even finer efforts to locate it, test monitoring tools, develop peatland fire management protocols, etc. Of roughly 5 202 676ha of wetlands mapped, 23 are Ramsar sites (800 000ha).

On top of this, the Water Research Commission and its partners listed 23 strategic water resource areas.

These 23 catchment areas make up 10% of South Africa, yet generate 50% of the water resources the country needs for growth and job creation.

Plans are under way to provide protection for these life-blood resources, the wetlands and strategic water resource areas, otherwise it remains highly vulnerable. These conservation measures are supported not only by national legislation, but international obligations, of which South Africa is a signatory.

Some of these are UNCCD, the Aichi biodiversity targets, SDG 2030, the UN decade (2021-2030) of ecosystem restoration, the International Society for Ecological Restoration and its African Chapter wing, the Africa agenda 2063 and NDP 2030; all similarly call for nations to take care of nature in their efforts to meet their green economic recovery strategies and developmental imperatives.

READ | Opinion: Citizen scientists, perhaps without a degree but certainly making a difference

If most, or all, of these are implemented urgently, the resulting healthy nature (or ecological infrastructure) will continue to provide the free basic services to humans and the economy.

Biodiversity losses will decline, ecosystems resilience will be enhanced through efforts, such as restoration. It is important to note that some of these aspired targets are already overdue! Degradation of wetlands habitat and biodiversity mean our future generations will inherit systems with no resilience in the light of global change.

There is no doubt that sick wetlands mean a sick economy. The return on ecological restoration investments has been estimated and far outweighs costs.

It remains with district and local municipalities, and national departments, such as Water and Sanitation, Environment, Forestry and Fisheries, to mainstream ecological infrastructure restoration in water resources management.

Caring for wetlands by acting now is everybody's business, particularly the citizen scientists.

The global economy is totally dependent on a continual supply of water to support growth, produce sufficient food and sustain jobs.