Siya Khumalo | How many black African foreign nationals were in the Zondo Commission Report? 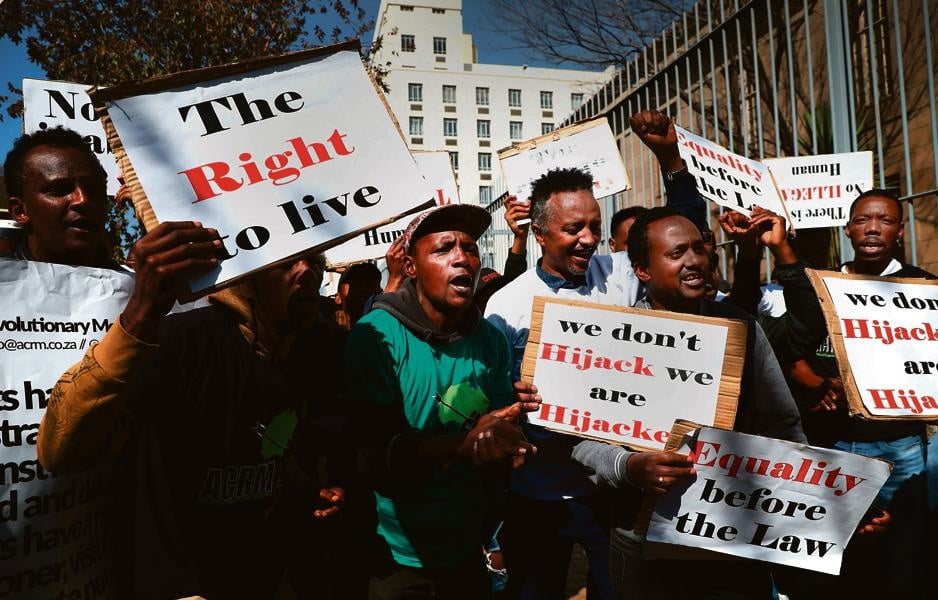 Foreign nationals protesting outside the Johannesburg Magistrates’ Court after fellow migrants were arrested due to lack of documentation. Picture: Sandile Ndlovu

When government seeks to enact local worker job reservation on top of laws like BEE and Employment Equity, it's blaming foreigners for its own actions against South Africans, writes Siya Khumalo.

Imagine a black-owned business that's landed a government contract. It delivers the service as required, but payment lags until there are cash flow challenges. Some would call this "waiting the supplier out" until they throw in the towel instead of trying to get payment or die another type of business death.

Or instead of getting the government contract at all, the business sees opportunities going to the same politically-connected people time and again — and those service providers don't deliver value for the taxpayer's money. On the contrary, value is siphoned off for kickbacks and the like.  So those politically-connected businesses get false market dominance, and no business that's unwilling to participate in corruption can survive. And so, from construction to finance, whole sectors stampede into the corruption government is leading on.

Where to cut costs?

Uncertain of its future, the business now asks itself where it can cut costs. It appears there's no way to succeed while operating within the law, so it hires undocumented immigrants who are prepared to accept a "negotiated" salary. Is this business doing the wrong thing? Absolutely.

Should we enforce minimum wage legislation? Absolutely.  Did this business have any other choice?

If you answer "yes", then you're oblivious to the economic strains facing South Africans who aren't in government corruption.

The Broad-Based Black Economic Empowerment (B-BBEE) Act was created to put government's money where its mouth was, concerning the development of such business. It was supposedly the compact by which larger privacy sector businesses, and its own enterprises, could be incentivised to help develop smaller black-owned businesses into skillful, empowered suppliers of goods and services — not to mention the employers of black South Africans.  This was one of the policy instruments with which government would help us sustainably overcome the legacy of apartheid.

Instead, as we see in the Zondo Commission, the governing party abused this and many other pieces of legislation, nullifying the incentive to empower black-owned businesses unless they were politically connected.

The foreign nationals who actively colluded in state capture were the Gupta family; they had to be naturalised as black South Africans to enable them to get state business. Therefore, holding smaller businesses accountable for hiring foreign nationals while not holding government accountable for doing the same thing is scapegoating the immigrants who work for smaller businesses.

When will government officials be held responsible for a.) state capture, where they colluded with a family of foreign nationals, in so doing b.) squeezing smaller businesses into a situation where they had to do the same thing to survive?

Why do I believe local job reservation will send us into a spiral of scapegoating instead of fixing this?  Because it's an artificial solution to a self-created problem. The real solution lies in addressing the cause of the problem, specifically, that government does not hold businesses in its supply chain (or even its own businesses) sufficiently accountable for creating value for South Africa, or for empowering black South Africans who aren't politically connected but are ready and able to deliver value for money. If we examine its track record with BEE, with the Public Finance Management Act, we see the corruption and the cronyism; the opportunity cost has snowballed.

When does government answer for the structural conditions that have tanked for businesses' revenue?

Who's responsible for setting a toxic tone for all procurement and empowerment practice? This has implications for skills development, enterprise and supplier development, and the economy's ability to absorb employers.

As government contemplates job reservation laws for South African workers, it's crucial to remember that the black foreign nationals who were at the heart of the Zondo Commission report were there because government officials artificially made them black South Africans. Where was reservation then?

READ | Siya Khumalo: The time is perfect for business to manage the government using B-BBEE

If South African businesses are to be suddenly accountable for their hiring practices apart from fair access to fair opportunities to do business with government, the state should also assume the burden of accounting for how it's distributed procurement opportunities, and how it's lead in empowering black South Africans.

This is all a delay tactic by which government, which is infamous for setting up compacts, commissions and investigative bodies that oversee investigative bodies, gets away from the mess it's dumping on people who are trying to survive without being killed for looking and sounding different. This state has blood on its hands, racking up a track record to rival that of any colonialist.

As politicians (and their footsoldiers) get on the xenophobic bandwagon, they lend it a veneer of legislative legitimacy when they should be resigning, or getting dismissed for their performance.