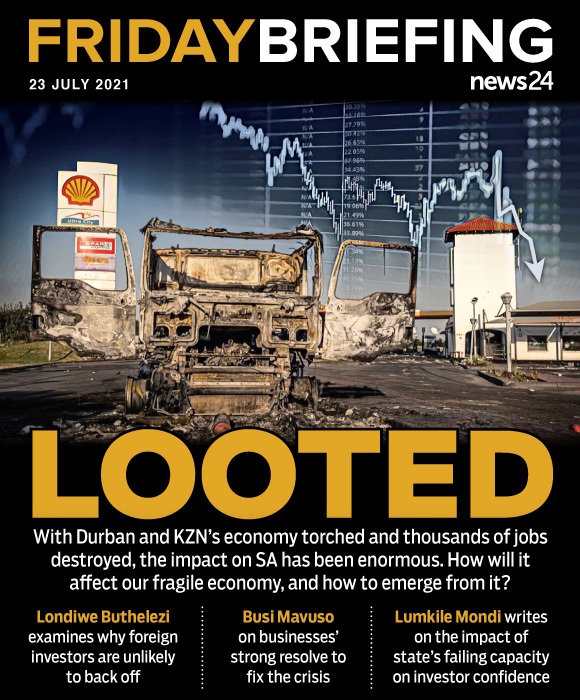 Even before the Covid-19 pandemic hit, the economy was already limping along.

Then came lockdowns, another round of Eskom power cuts and a slow vaccine rollout. Things did seem to be looking up though with data indicating an acceleration in gross domestic product in the second quarter.

The outbreak of violence and looting last week, which were sparked by the arrest and jailing of former president Jacob Zuma after he failed to adhere to a court order to appear at the Zondo Commission, changed that projection.

One step forward. Two steps back.

The riots started in KwaZulu-Natal and spread to Gauteng. According to the presidency, R50 billion was lost in output, while 150 000 jobs were placed at risk.

In this week's Friday Briefing we examine whether our country's fragile economy will weather the storm.

Fin24's Londiwe Buthelezi breaks down why she thinks investors will be willing to keep South Africa on their radar.

Business Leadership South Africa's Busi Mavuso reflects on what needs to be done to keep investors interested - which is more than just talking shop. Business Unity South Africa's Cas Coovadia has similar sentiments, saying the country will need to make a concerted effort to address the inequality issues.

Wits university's Dr Lumkile Mondi analyses the state's lack of capacity to deal with the violence and why government should be concerned about non-governmental players entering the arena. Finally, the University of the Western Cape's Dr Jean Redpath looks specifically at policing issues in KwaZulu-Natal and why it is cause for concern.

Enjoy your weekend and stay safe.

Two steps back: Is SA still a viable investment destination for foreign investors?

After the recent unrest, foreign investors may be forgiven for giving South Africa the boot. But as Londiwe Buthelezi writes, the country has some comparative advantages that may keep investors, interested in emerging markets, glued.

Busi Mavuso writes that it is important that government follow through on plans that are going to be developed following the recent unrest to ensure investment in SA continues.

SA still an investment option, but we must say goodbye to inequality

Following the recent unrest, South Africa is fortunate that current and potential investors have indicated they will continue to consider the country as an investment destination, provided we act decisively to address both economic and broader environmental issues, writes Cas Coovadia.

Failing state capacity: Time for investors to look beyond government?

Last week's unrest showed that it was non-governmental actors who held the power rather than government to stop the insurrection. Lumkile Mondi writes that business must look beyond the state and focus on non-state actors as partners and embed itself in communities where it operates.

Inadequate and violent policing in KwaZulu-Natal: What's behind it?

KwaZulu-Natal has long suffered from inadequate, corrupt and violent policing. Recent events have simply made it more obvious. The problem of policing in the province dates from before the transition to democracy. Policing is a national function - South Africa is in crisis and in KwaZulu-Natal the crisis is magnified, writes Jean Redpath.

To receive Friday Briefing, sign up for the newsletter here.

We live in a world where facts and fiction get blurred
In times of uncertainty you need journalism you can trust. For 14 free days, you can have access to a world of in-depth analyses, investigative journalism, top opinions and a range of features. Journalism strengthens democracy. Invest in the future today. Thereafter you will be billed R75 per month. You can cancel anytime and if you cancel within 14 days you won't be billed.
Subscribe to News24
Next on News24
Ongama Mtimka | Political maturity and humility vital for coalition success