FRIDAY BRIEFING | Rising living costs: Januworry may soon be over, but prepare for 2022 worry 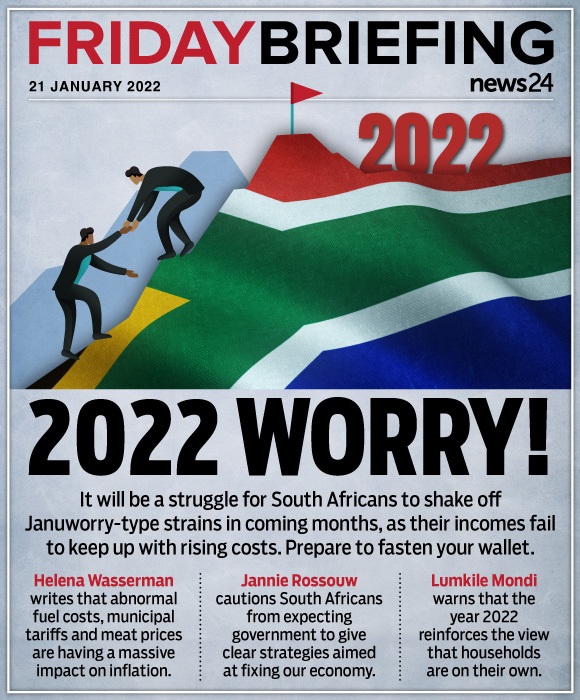 Januworry may soon be over, but prepare for 2022 worry

It seems trite to say consumers need to fasten their seat belts this year. It's all we've been doing. But things are not looking good for your wallet if you consider consumer inflation hit 5.9% in December 2021. This is the highest annual rate since March 2017.

South Africans also forked out more for food and non-alcoholic drinks in December last year, as well as for transport. Costs to get someone from A to B have been soaring, with rapidly increasing petrol and diesel prices.

Interest rates went up late last year and the country is grappling with growing unemployment figures, which are more likely to get worse this year, rather than improve.

Added to this, consumers might soon find themselves facing a 20.5% tariff hike from Eskom.

While the World Bank appears to be optimistic that the country's economy will rebound to pre-pandemic levels, there are some concerns, such as large scale unemployment, slow implementation of reforms, rising government debt and debt service costs.

So it may seem glib, but make another notch on that belt and tighten it.

In this week's Friday Briefing, Fin24's Helena Wasserman writes that we are probably in for a rough year financially. Our salaries are not growing, while our cost of living is. Visiting professor at Wits School of Business Jannie Rossouw is of the view that we shouldn't wait for the government to improve our economic conditions and should instead take matters into our own hands.

It is a view that is replicated by Dr Lumkile Mondi from Wits school of economics and finance. Both Rossouw and Mondi are of the view that we will see little action from President Cyril Ramaphosa in implementing economic strategies in the run-up to the ANC's elective conference.

On that bleak note, I hope you have a good weekend.

The big money squeeze on South Africans: Why it's getting hard to survive

South Africans may struggle to shake off Januworry-type strains in coming months, as their incomes fail to keep up with rising costs, says Helena Wasserman.

South Africans have low expectations of govt. Now they must lower them even further

It will serve South Africans well to drop their expectations of government over the next year, as it has no clear strategy to implement change to improve economic conditions. Jannie Rossouw writes that we must figure out how to prosper despite the government, not because of the government.

The burden is firmly on SA households in 2022

The year 2022 is going to be difficult for South African households because of rising costs, failing infrastructure, deepening unemployment and an absent government, due to the inability of the president to act as a result of the looming ANC electoral conference in December, writes Lumkile Mondi.

R440k for one Daily Lotto winner!
Full list of lottery results
Voting Booth
Have you and your family been counted in Census 2022?
Please select an option Oops! Something went wrong, please try again later.
Yes
47% - 958 votes
No
53% - 1088 votes
Previous Results
Podcasts
PODCAST | The Story: How one incident at Stellenbosch University sheds light on deeper issues