Have you met News24's columnists? Here they are... plus, some new additions 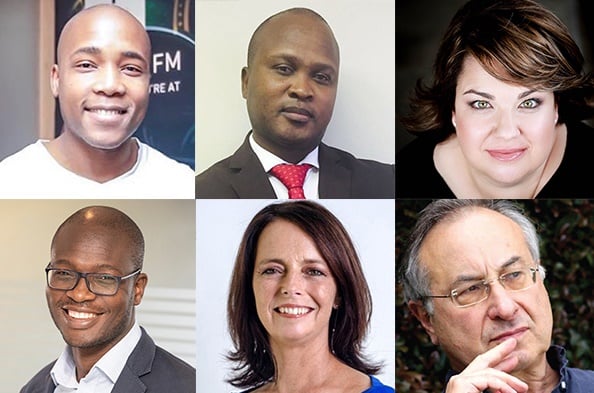 When readers want a more in-depth look at what is happening in the news, they go to News24's opinion pages, where they find analysis and informed views from people in the know. News24's regular columnists are analysts, authors, journalists and former politicians who are not afraid to air their views and confront the powerful. Learn more about your favourite columnists and meet the latest additions to the line-up.

From 10 August, readers will find the views of Siya Khumalo on News24 every Monday morning. Khumalo is ex-military, which he says prepared him for the #ApocalypseChallenge once optimistically called "2020". He's a Mr Gay South Africa runner-up and Mr Gay World Top 10 finalist. After being reprimanded at a dinner party for "talking about religion, politics and sex in polite company", he wrote a book titled You Have To Be Gay To Know God (2018). The book made the 2019 long-list for the Sunday Times' Alan Paton Literary Award, the shortlist for the UJ Debut Prize and won the Desmond Tutu-Gerrit Brand Literary Prize. He writes Bible commentary and science fiction in his spare time, finding the philosophical questions they raise more alike than he first anticipated. These hobbies dovetail into a fascination with the socio-economic and ethical implications of technological advances. News24 readers will also be able to sink their teeth into Pieter du Toit's columns which will be published every Friday. Du Toit is News24’s assistant editor for in-depth news. He is the author of the bestselling book The Stellenbosch Mafia (2019) and co-author of Enemy of the People (2017). He has worked at various publications at Media24, and is a former parliamentary correspondent and news editor at Beeld. Vanessa Banton is News24's opinion editor. Before moving into the position this month, she was News24's deputy news editor. She previously worked in broadcasting at eNCA as an assignment's editor as well as SAfm as a senior current affairs producer. She has also lectured at Boston Media House and Varsity College. Adriaan Basson is the editor-in-chief of News24 and author of four books on corruption and current affairs. He is the recipient of multiple awards for investigative journalism, including the CNN African Journalist of the Year for news as well as the Taco Kuiper Award. Having started his career at Beeld in 2003, Basson worked as an investigative journalist at the Mail & Guardian, where he was a founding member of amaBhungane, before moving to City Press as assistant editor. In 2013, he became editor of Beeld and in 2016 was appointed editor-in-chief of News24. His books include Zuma Exposed (2012) and Blessed by Bosasa (2019). His column appears every Monday morning. Ralph Mathekga's column appears on Tuesdays. The political analyst completed his PhD in political studies at the University of Johannesburg in 2019. His thesis focused on the court challenges on affirmative action in South Africa and the implications on equality and justice. Mathekga previously worked at the Institute for Democracy in South Africa (Idasa) and lectured at the University of the Western Cape. He has also worked at National Treasury in the budget office as a senior policy analyst. Mathekga is the author of When Zuma Goes (2016) and Ramaphosa's Turn (2018). Mandy Wiener is a multi-award-winning reporter. She worked for Eyewitness News from 2004 until 2014, filing reports for Talk Radio 702, 567 Cape Talk, 94.7 Highveld Stereo and Kfm radio stations. Wiener specialises in investigative reporting and legal matters, having extensively covered both the corruption trial of former national police commissioner Jackie Selebi and the Brett Kebble murder trial. She also exposed South Africa's "underworld" while reporting extensively on Czech fugitive Radovan Krejcir, Teazers boss Lolly Jackson and other mysterious murders. She has won a number of journalism awards including the CNN African Radio Journalist of the Year. Wiener is the author of Killing Kebble (2011), My Second Initiation, The Memoir of Vusi Pikoli (2013) and Behind the Door: The Oscar Pistorius and Reeva Steenkamp Story (2014) with her colleague Barry Bateman. She is currently working on a new book, Ministry of Crime, about organised crime and the relationship with the police. Wiener's column appears on a Tuesday. Melanie Verwoerd writes every Wednesday. She is a political analyst and media personality from Cape Town. In 1990, after a brief spell at Oxford in the UK and following the unbanning of the ANC, she returned to South Africa. Shortly after her return, she joined the ANC. In 2001, Verwoerd was appointed as South African Ambassador to Ireland. Since returning to South Africa in 2013, she has advised companies on political developments in South Africa and Africa. Verwoerd is the author of When we Dance, The Verwoerd who toyi-toyied, Our Madiba: Stories and reflections of those who met Nelson Mandela (2013) and 21 at 21: A nation coming of age (2015). Howard Feldman is the author of Smile Dammit! (2019) Carry On Baggage (2014) and Circus South Africa (2016). He is a columnist and the daily breakfast show host at ChaiFM. He is also the head of marketing and people at Synthesis Software Technologies. He was once a lawyer but prefers not to talk about that. Look out for his column on Wednesdays. Mpumelelo Mkhabela has previously worked as a political writer and parliamentary correspondent for City Press and later Sunday Times. Thereafter, he was the deputy editor for Sunday Independent. Mkhabela was also the editor-in-chief for the Daily Dispatch and editor of the Sowetan. He was previously the station manager at PowerFM before becoming a Fellow for Study of Governance Innovation at the University of Pretoria and political science lecturer at Unisa. His column appears on a Thursday. Qaanitah Hunter is an award-winning political journalist and author based in Johannesburg. She was recently appointed as political editor of News24 and writes a political column every Thursday. She previously worked as a political and investigative reporter for the Sunday Times. In 2019, she became the youngest person to be awarded the Nat Nakasa Award for brave and courageous journalism. Mbhazima Shilowa joined the trade union movement in 1981. He was elected the deputy general-secretary of Cosatu in 1991 and general-secretary in 1993, a position he held till 1999 when he became the premier of Gauteng, South Africa's economic hub. As general-secretary of Cosatu, Shilowa played a key role in the establishment of the National Economic Development and Labour Council (Nedlac). He was a member of the national executive committee (NEC) of the ANC from 1997 to 2007 and central committee of the SACP from 1991 to 2007. He was involved in the multiparty negotiations process (Codesa), which led to the writing of South Africa's democratic Constitution. He was the premier of the province from 1999 to 2008 when he resigned. Shilowa is a founding member of the Congress of the People (Cope). John Matisonn is a journalist, broadcaster and author of Cyril's Choices: Lessons from 25 years of freedom in South Africa and God, Spies and Lies: Finding South Africa's future through its past (2019). His column on international affairs appears every Saturday. A foreign correspondent in Washington DC for six years, he has been an award-winning broadcaster on American public television and radio, and published in the Financial Times (UK), New York Times, Washington Post, and many other prominent publications. In South Africa, he received a jail sentence for refusing to disclose his sources in the Muldergate scandal. When Nelson Mandela came out of jail Matisonn trained him for television and later joined Mandela's administration as a counsellor at the Independent Broadcasting Authority. His column appears on Saturdays. Share
Next on News24
News24 documentaries: Beautiful visuals, captivating storytelling worth the watch