'Time for balanced people to speak up.' Have you read these comments? Fist fights in Brackenfell, stolen paintings in the Free State and a retired army chief's ambitions to 'save' the ANC – these are the stories that got you talking this week.

"Mr President you come across like an online moderator trying to please trolls at the expense of decent people. In the process you are hurting your credibility and leading people to lose respect for you." – doorboot on Ramaphosa calls for 'restraint' after Brackenfell parents trade blows with EFF supporters

"Time for balanced people to speak up. Those guys with knotted consciousnesses should not be entertained in these times that need clear-mindedness, logic, empathy, vision. Like Trump, they just don't know that they don't know." – Wim van der Walt One on Beware the crackpot general who wants to capture the ANC by Adriaan Basson

"The real tragedy is that there are many highly competent women entrepreneurs in RSA. Myeni and Kwinana have done a disservice to the good women of our country." – PEGASUS on Vetkoek lady: The joke’s on us by Mondli Makhanya

"The dignity of black people continues to be trampled upon by an ANC more intent on stealing state resources than serving the poor, and who use racism as a scapegoat for their failures." – vallieb on Retired army chief to ‘save’ ANC

"Can we have an op-ed on why provincial governments hold on to art assets (in this case R6-R8M) when children die in pit latrines? And how many more vanity hangings are there in our national 'treasury' of artifacts?" – Vox Marcus on Pierneef painting: What you need to know about the theft case of Ace Magashule's former bodyguard

"We do not need trampling Trumps in this country, nor do we need the loony fringe on either side. We need strong, honest leaders who can clear out the rotten core, and to whom the majority of thinking citizens can relate."
News24 user Katford

Thembekile Kimi Makwetu had only two weeks left in his position before handing over the baton of the office of the Auditor General to his deputy Tsakani Maluleke.

To receive the Top Comments newsletter weekly, sign up here. It's free!

We live in a world where facts and fiction get blurred
In times of uncertainty you need journalism you can trust. For only R75 per month, you have access to a world of in-depth analyses, investigative journalism, top opinions and a range of features. Journalism strengthens democracy. Invest in the future today.
Subscribe to News24
Related Links
Is Rupert Murdoch dumping Trump? Fox News, New York Post 'distancing themselves from US president'
Ace Magashule's warrant of arrest: Political parties react
Why Ace Magashule's arrest is a 'watershed moment' for the ANC
Next on News24
Top comments: US election to fat cakes and tenders - these are the stories that got you talking this week 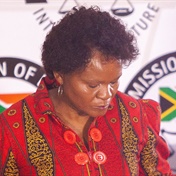