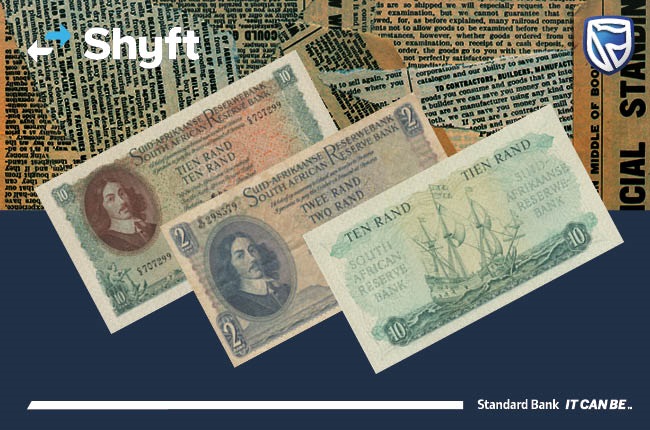 A bunch of roses, accompanied by a mysterious note, is what you’d expect on Valentine’s Day in any old year. But in 1961, the roses were most likely also bought using a mysterious note. On 14 February 1961, the rand came into circulation, replacing the South African pound as the country’s official currency. And just like that, consumers could buy goods with crisp new one rand, ten rand and 20 rand notes. As you might suspect, the currency got its name from the Witwatersrand – source of the rich gold deposit that changed South Africa’s destiny when it was discovered in the 1880s. Predictably, “Witwatersrand” was too long a name for a currency, but “rand” was just fine.

By the time the rand had its beginning that Valentine’s Day, many of the biggest South African companies we know today had already been going strong. Some of them are still listed on the JSE, and their staying power has richly rewarded the investors who were willing to back them. Here are six stalwarts.

Though now ranked as the second-largest local manufacturer in the private pharmaceutical market, Adcock Ingram started in 1890 as a small pharmacy in Krugersdorp – at the time named EJ Adcock Pharmacy. The four brothers who once worked there bought the store and decided to branch out into product development, manufacturing, distribution, and sales and marketing. Some of those products are household names today, including the likes of Panado painkillers, Corenza C, Allergex and Citro-Soda. The company prides itself on its humble beginnings and constant evolution. In 1950, Adcock Ingram listed on the JSE – the first pharmaceutical company to list. Since then it’s been de-listed (during a brief period when it was owned by Tiger Brands), but has been re-listed since 25 August 2008. Also much older than the rand itself, cement maker PPC was founded in 1892. Short for Pretoria Portland Cement, the company’s history was closely linked to the development of South Africa itself. Entire cities sprang up where earlier there was only veld. Cities need cement. The gold rush of the late 19th century drove demand, followed by the industrialisation from the 1920s onwards, and later huge infrastructure projects like bridges and dam walls. Economic booms in the 1960s and again in the early 2000s turned PPC into a giant. But booms are often followed by busts, as the construction industry has had to deal with feeble economic growth. Despite the lull, PPC is still South Africa’s largest cement maker and its share price has rallied more than 200% over the past three months. When gold was discovered in what is now Johannesburg, it led to a rush for the precious metal plus an influx of fortune seekers. They formed mining companies, and soon these stocks were traded publicly. Mining was the biggest thing in town, but miners get thirsty, and brewers started quenching that thirst. The brewer we now know as South African Breweries (SAB) was a rare sight when it listed on the JSE in 1897. Just about all the other stocks traded were mining companies. A hundred years later, SAB moved its primary listing to London and started an acquisition spree that would turn it into SABMiller and soon have it become the world’s second largest brewer. After a mega-merger in 2016, SAB is now part of AB Inbev, the biggest brewer in the business. But investors can still get exposure to the growth story of popular South African brands such as Castle, Black Label and Hansa by buying AB Inbev shares on the JSE. Founded in 1915 as a newspaper publisher, Naspers has since reinvented itself and is now a global tech giant. It still owns Media24 and its host of newspapers, magazines and book publishers, but an early investment in pay-television business M-Net in the mid-1980s gave Naspers a boost. M-Net was a massive success and generated enough cash for Naspers to go shopping in different parts of the world for other exciting start-up businesses. One such bet, a Chinese company called Tencent, has since grown into one of the world’s five largest technology companies. Naspers – through its Amsterdam-listed subsidiary Prosus – owns more than 30% of Tencent, which means it punches in the same league as Google and Facebook, and is now by far Africa’s largest company. Today, South African retail giant Woolworths owns 1 492 stores in its three major operating divisions – Woolworths South Africa, David Jones and Country Road Group – across sub-Saharan Africa, Australia and New Zealand. The very first Woolworths store opened its doors to the public in Plein Street, Cape Town, on 30 October 1931 – in the dining room of the former Royal Hotel, which had recently closed down. Woolworths founder Max Sonnenberg captured the public’s imagination with dynamic store policies that set the store apart from its competitors. A second store opened in Durban three years later, with another two – in Port Elizabeth and Johannesburg – opening a year after that. In 1997, Woolworths Holdings Limited acquired a controlling interest in Australia’s Country Road Group, with the remaining shares acquired in 2014 – the year the Group also acquired David Jones for AUD$2.2-billion. Founded in 1950, Harmony Gold was quietly managed by Randgold, another miner of gold, for more than four decades. But in the 1990s, Harmony started going it alone and soon became one of the most exciting players in gold mining. Under then-CEO Bernard Swanepoel, the company made a string of acquisitions – mostly mining operations that do well when the currency loses value. And in the late 1990s and early 2000s, the rand was pummeled by the markets, which gave Harmony a real boost. So much so that Swanepoel launched an audacious takeover bid for larger rival Gold Fields, which became one of the decade’s most talked-about corporate events, but ultimately failed. It nevertheless announced Harmony’s arrival on the world stage. (The company also mines gold in Papua New Guinea.) In 2020 it acquired rival AngloGold Ashanti’s last remaining mines in South Africa. To celebrate the rand’s birthday, Shyft is giving you some randelas. Shyft is an app for the globally minded based in South Africa. It helps you buy, send and store ZAR and foreign currency anytime, anywhere, directly from your mobile phone. To join the #ZARparty, download the Shyft app and complete registration before the end of February and, once onboarded as a Shyft user, you will get R100. Download Shyft now. Ts & Cs apply.

This post and content is sponsored, written and provided by Shyft, an app for the globally minded, powered by Standard Bank.

We live in a world where facts and fiction get blurred
In times of uncertainty you need journalism you can trust. For 14 free days, you can have access to a world of in-depth analyses, investigative journalism, top opinions and a range of features. Journalism strengthens democracy. Invest in the future today. Thereafter you will be billed R75 per month. You can cancel anytime and if you cancel within 14 days you won't be billed.
Subscribe to News24
Next on News24
Merchants launch contact centre in Soweto to create jobs and boost economic development