Parliament fire: Final report on reconstruction to be released in September

The final report on the reconstruction of the ruined National Assembly building will only be made public in September, 10 months after a fire gutted the historic building.

But ordinary MPs will have to wait a little longer to peruse it.

Since the fire broke out on 2 January, yellow police tape and fencing barricades have restricted access to the damaged building.

According to Public Works and Infrastructure Minister Patricia de Lille, challenges with the parliamentary programme have delayed the publication of the final report.

In February, the Department of Public Works and Infrastructure appointed the Coega Development Corporation (CDC) as the independent specialist engineering team to assess the damage. 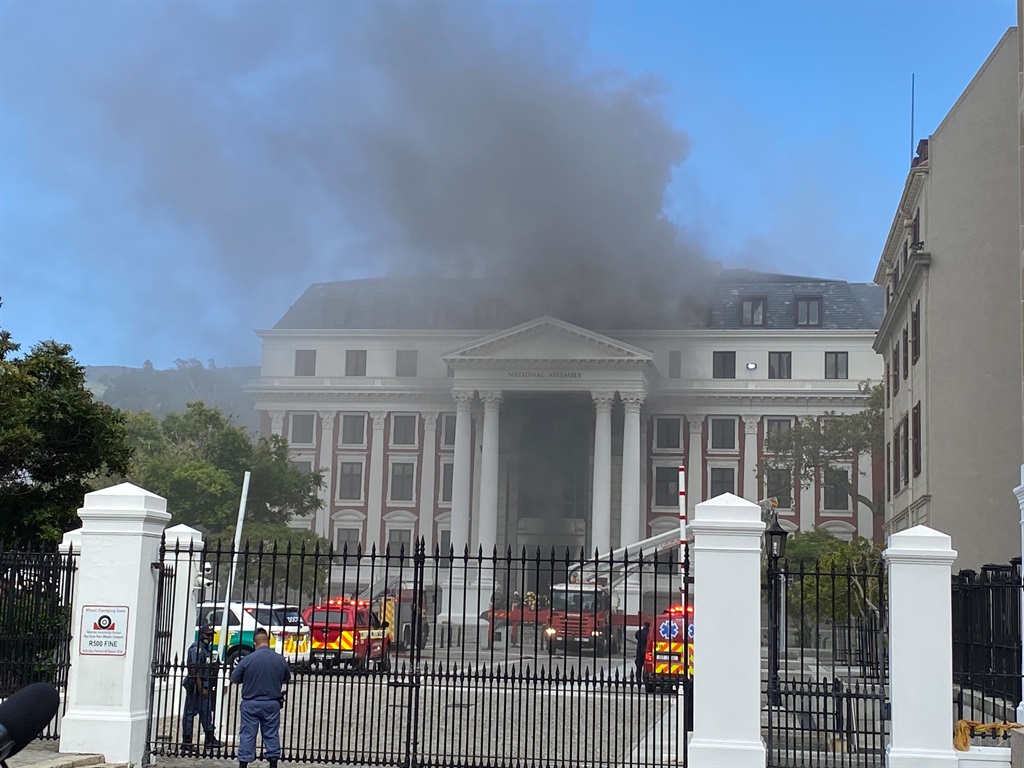 Smoke rising out of the National Assembly building as firefighters battled the blaze at Parliament.
News24 PHOTO: Herman Eloff/News24

Parliament went into recess on 15 June and will reopen on 15 August.

"I cannot make the report public until Parliament has been briefed," she added.

During a meeting in May, Christo Beukes, the programme manager at CDC, told MPs they requested an extension for the submission of the report due to the extent of water damage identified in the Old Assembly building.

This, he said, required further detailed assessments of the entire building.

The full extent of the damage, whether the building should be repaired or taken down and rebuilt, and what it will cost, will form part of the second phase report.

Beukes said the second phase of the report would provide indicative timelines for the planning and construction stages for the restoration work for each building.

The fire gutted the National Assembly building, damaging some offices on the ground floor. The entrance lobby suffered some damage due to intense heat and smoke, but no structural damage.

The government forked out more than R300 000 for specialists to do "a detailed assessment".

The CDC is a public entity, wholly owned by the Eastern Cape government, and is mandated to develop and operate the 9003-Special Economic Zone.

Zandile Mafe was arrested in connection with the January fire, and the case is currently before the courts.

In the indictment which the State gave to his lawyer, Nikiwe Nyathi, it alleges he accused President Cyril Ramaphosa of funding rhino horn poaching, Transport Minister Fikile Mbalula took a substantial amount of money from the Road Accident Fund to pay for ANC election T-shirts, and the South African government gave the US government trillions for Americans to get their social grants.

He also claimed Ramaphosa gave R1.7 trillion to help refugees from other countries, but the president and Parliament did not care about the poor in South Africa.

We live in a world where facts and fiction get blurred
In times of uncertainty you need journalism you can trust. For 14 free days, you can have access to a world of in-depth analyses, investigative journalism, top opinions and a range of features. Journalism strengthens democracy. Invest in the future today. Thereafter you will be billed R75 per month. You can cancel anytime and if you cancel within 14 days you won't be billed.
Subscribe to News24
Next on News24
Phala Phala panel: Richard Calland out, replaced by Mahlape Sello