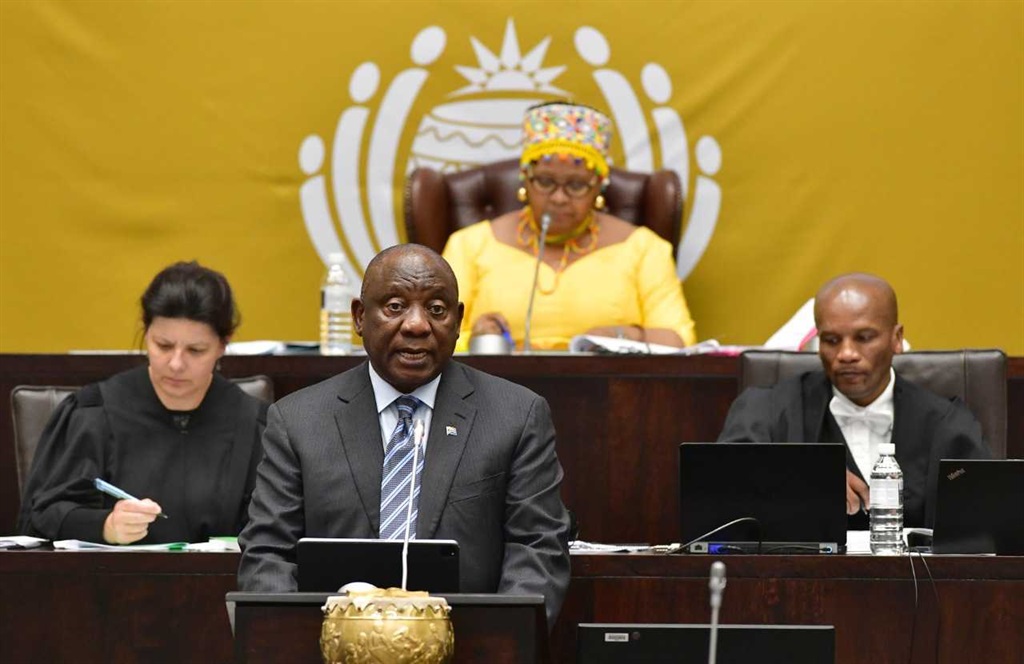 Ramaphosa answered questions in the National Assembly on Thursday.

In a follow-up to a question about the commission, FF Plus leader Pieter Groenewald said Ramaphosa, had in an affidavit in the cadre deployment case said he was not obliged to implement all recommendations.

The case Groenewald referred to is the DA's application to have cadre deployment declared unconstitutional and unlawful.

The DA filed its application about two weeks before the final parts of the commission's report were released on 22 June.

In the report, Chief Justice Raymond Zondo came to the conclusion cadre deployment played a significant part in enabling state capture and was unlawful and unconstitutional.

In response to DA leader John Steenhuisen's founding affidavit, Ramaphosa relied heavily on his testimony on cadre deployment to the commission, which it had largely rejected.

Ramaphosa, in his capacity as president of the country, not the ANC, begged to differ cadre deployment was "unlawful and unconstitutional".

He was at pains to point out the commission did not recommend the ANC do away with the policy, despite its scathing findings.

Ramaphosa's affidavit had read: "Its recommendations are not binding. They are aimed at assisting me, as president, to address the issues that were at the heart of the inquiry."

He said he took the commission's findings and recommendations seriously.

Groenewald said it was only fair the public, who forked out almost R1 billion for the commission, must have certainty Ramaphosa would ensure all recommendations were implemented.

"So, my follow-up is, will you implement all recommendations? If not, why not, and what criteria will you follow to decide which ones you will implement and which ones not?" he asked.

Many of the recommendations for criminal investigation, prosecution and asset recovery contained in the Commission’s report were already receiving priority attention.

A chuckling Ramaphosa said he was glad Groenewald read his affidavits.

"Yes, what was set out in the affidavit was the law. The law of commissions is that once a report is presented to the president, he may or may not, he or she, may or may not implement it. So that is a given, in terms of the law," Ramaphosa said.

According to him, the state capture commission process was a "defining moment" for South Africa in dealing with corruption and state capture.

"And because it has been a defining moment in which we had to take a different path, because the other path led to the disaster that we are living through as we wade our way from what was done wrongly in the past, is a path not to take and we must depart from that.

"So, the political will and determination is that we must set ourselves on this path of moving away from state capture, dealing with state capture. That is what has underpinned our will to say we will implement the recommendations of the Zondo Commission."

And let me say, that is our commitment, we will implement.

"There may well be some that we will not be able to implement within a particular timeframe and we will need to look at phases of when some get implemented and so forth.

"And if there are challenges in implementing, having stated our clear and definite desire and wish and will, we will be able to say so. We will be able to give reasons why we are not able to do so."

The original question, by ANC MP Jerome Maake, was: "Whether the government will prioritise any of the recommendations made by the chairperson of the State Capture Commission, Chief Justice RMM Zondo, for immediate implementation?"

Ramaphosa said when he received the commission's final report in June, he said he would study it and provide a comprehensive response and a plan for implementation within the court-stipulated timeframe of four months.

READ | We've heard this before ... ANC shields Ramaphosa on Phala Phala as it did with Zuma

He added there were 358 recommendations from the commission requiring consideration.

"These range in nature from recommended actions against alleged perpetrators and enablers of corruption, to the recovery of funds, to proposed reforms to prevent, detect and prosecute corruption in future.

"The work that is currently underway to consider these recommendations does not mean that we have been waiting for the tabling of this response plan to start the process of implementation of recommendations made by the commission."

He reminded the House that he amended the commission's regulations in 2020 to allow it to share information, records, and documents with law enforcement agencies.

"This was to enable law enforcement agencies to proceed with investigations while the State Capture Commission was busy with its work.

"As a result, many of the recommendations for criminal investigation, prosecution and asset recovery contained in the commission's report were already receiving priority attention."

Ramaphosa said, similarly, across government departments, agencies, state-owned enterprises and Chapter 9 institutions work was underway on a range of interventions to respond to the commission's findings and recommendations.

He added the implantation plan that he would submit to Parliament would outline this work.

"Our approach is guided by the need to ensure both that the perpetrators of state capture face the consequences of their actions and that we use this opportunity to design and implement far-reaching reforms to prevent a future occurrence."

IFP MP Mkhuleko Hlengwa asked if there was a political will to implement the recommendations.

On whether he will meet the deadline of 22 October to submit the implementation plan to Parliament, he said: "Uh, the desire is that we should."

Ramaphosa added the commission approached the court to condone the final report's late submission and correct some errors.

If there is a change in the plan to meet the deadline, they will alert Parliament and provide reasons.

We live in a world where facts and fiction get blurred
In times of uncertainty you need journalism you can trust. For 14 free days, you can have access to a world of in-depth analyses, investigative journalism, top opinions and a range of features. Journalism strengthens democracy. Invest in the future today. Thereafter you will be billed R75 per month. You can cancel anytime and if you cancel within 14 days you won't be billed.
Subscribe to News24
Next on News24
Phala Phala: Ramaphosa facing opposition hellbent on his impeachment