A KwaZulu-Natal pensioner reached his goal of walking 900km to raise funds for the families of healthcare workers who were affected by Covid-19, but wants to keep on walking to raise even more money.

Bill Wedderburn is now on a mission to extend his goal to 1 000km to mark his 90th birthday next month.

Speaking to News24, Wedderburn said he was inspired to do the walk after he was admitted to the Netcare Kingsway Hospital last year with Covid-19.

A nurse who had contracted the virus died, and he was so moved by the dedication of the nurses and healthcare workers working through the pandemic that he wanted to do something for their families who had to sacrifice so much as they went off to work on the frontlines.

Wedderburn has lived with chronic kidney disease for years, and is also a prostate cancer survivor.

He was considered high risk when he contracted the virus, but said the dedicated medical fraternity did everything they could to ensure his recovery during his two-week stay in hospital.

"It was a miracle that I survived," he said. "I attribute it to the prayers of so many people that I did not know, and the excellent care I received while in hospital, and because of that, I owe my life to healthcare workers."

Wedderburn said the stories he was told in the hospital of how healthcare workers were dying while trying to nurse those with Covid-19 back to health, was "heart-breaking" for him to hear, and he decided he had to do something to help their families. "I committed to walking 900km before my 90th birthday next month, clocking 100km for every decade of my life. For every kilometre missed, I would then pay R10 into the fund. Last week, I completed my 900km,” he said.

Staff and neighbours at the Renishaw Lifestyle Estate retirement village in Scottburgh welcomed him with cheers and open arms as he gracefully walked up the gravelled road towards the finishing line last Friday.

"We are so proud of Bill's incredible achievement that has touched the lives of so many people, far and wide since he started last year. He is the true embodiment of the community spirit, and we are so proud of him," said spokesperson Phil Barker.

'It gives me great pleasure'

When asked if he had missed any kilometres yet, Wedderburn confidently sai: "Not at all!"

He said he had been walking every day since September, for up to three hours a day, and was eagerly awaiting the final count of 1 000km.

"I recently purchased a very good pair of walking shoes, a floppy hat, and a walking stick. I've enjoyed all my walks so far," Wedderburn, a retired metallurgist, said. 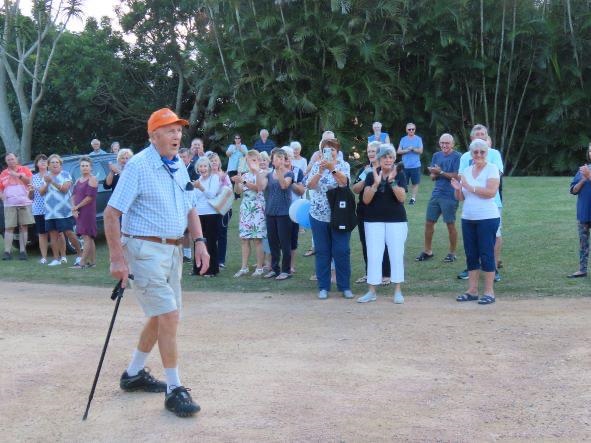 He said the funds he raises will be distributed to the families of healthcare workers from KwaZulu-Natal, and if there is enough left, to families in other provinces.

"The funds will go to the families of healthcare workers who died from Covid-19, as many of those families have been left destitute with their breadwinner gone. The walks also aided me in recovering from my illness, and I really encourage everyone to get out there and exercise," he added.

Wedderburn was born in Scotland and came to South Africa with his wife in 1957.

"My wife passed on three years ago, but I’m sure she would’ve been very proud of my accomplishment so far." A total of R80 000 has since been raised through a non-profit organisation (NPO) called Covid Healthcare Workers Family Fund (HWFF) and through BackaBuddy.

"Since the campaign launched, we received R60 000 in donations through our NPO and another R20 000 from BackaBuddy, which is incredible. I am extremely happy that so many people felt the need to donate to such a worthy cause," he added.

Wedderburn stressed the importance of fulfilling his promise.

"It’s something I long to do and it gives me great pleasure knowing that at my age I am able to assist those in need."

When he reaches the new finish line he has set, he plans on putting his feet up and celebrating his 90th with his children and grandkids.

We live in a world where facts and fiction get blurred
In times of uncertainty you need journalism you can trust. For 14 free days, you can have access to a world of in-depth analyses, investigative journalism, top opinions and a range of features. Journalism strengthens democracy. Invest in the future today. Thereafter you will be billed R75 per month. You can cancel anytime and if you cancel within 14 days you won't be billed.
Subscribe to News24
Next on News24
'My friend donated a portion of her liver': Mom shares moving story of her newborn's rare condition