Addressing the nation on Sunday night, President Cyril Ramaphosa announced increased lockdown restrictions, including another ban on the sale of alcohol and sit-in dining at restaurants, for the next 14 days and expressed uncertainty about the potential duration and severity of the country's third wave of Covid-19 infections.

The need to act, he said, was informed by scientific advice, following the announcement on Saturday that the Delta variant – a more transmissible mutation of the coronavirus that causes Covid-19 – had been found in five provinces already: Gauteng; KwaZulu-Natal; the Eastern Cape; the Free State; and the Western Cape.

"We must all be worried about what we are seeing unfold before our very eyes," he said.

Gauteng now accounts for more than 60% of new cases in the country. With the exception of the Northern Cape and Free State, infections are rising rapidly in all other provinces.

"We are in the grip of a devastating wave that by all indications, seems like it will be worse than those that preceded it," he said. "We don't know how long this [wave] will last, but indications are that it could last longer."

In Gauteng, where the third wave has already surpassed peak infection rates seen previously, the situation is particularly dire and hospitals are under severe strain as they try to keep up with a soaring demand for ICU beds and oxygen.

The province has already recorded its third deadliest week on record since the Covid-19 local epidemic began, with more than 3 000 deaths from natural causes for the week ending 19 June, according to estimates prepared by researchers at the SA Medical Research Council (SAMRC) and the University of Cape Town (UCT).

In response to the threat posed by the Delta variant, which is estimated to be 60% more transmissible than previous variants, Ramaphosa announced the following additional restrictions for the next two weeks:

"[The] third wave is gathering in strength and force. Once again, we find ourselves at a defining moment in our fight against this disease," he said.

Ramaphosa added that the restrictions would be reviewed on 11 July.

Key data metrics show that the Delta variant is already causing infections to surge beyond what was previously seen. The variant, which was first discovered in India in October 2020, has been found to be 60% more transmissible than previous variants. Early data showed that children were more likely to become infected with the variant. Data in countries where the Delta variant had already become dominant, such as the UK, showed that the variant might not cause more severe disease.

READ | IN FULL: 'We're in the grip of a devastating wave' - Ramaphosa's dire warning as SA moves to Level 4

The increased transmissibility of the variant is already a major cause for concern in Gauteng, where the average number of cases reported daily for the past seven days has risen above 9 500 new cases per day - almost double the number of daily cases seen at the peak of the first and second waves. Further clues to the rapid increase in cases potentially driven by the Delta variant can be found in National Institute for Communicable Diseases (NICD) data on the proportion of tests that return positive results.

When visualised in a graph showing weekly percentages of positive tests compared to the outright number of tests weekly, it is clear that testing continued apace after the second wave with a sharp surge in positivity rates, followed by increases in the number of tests done as the demand grew. 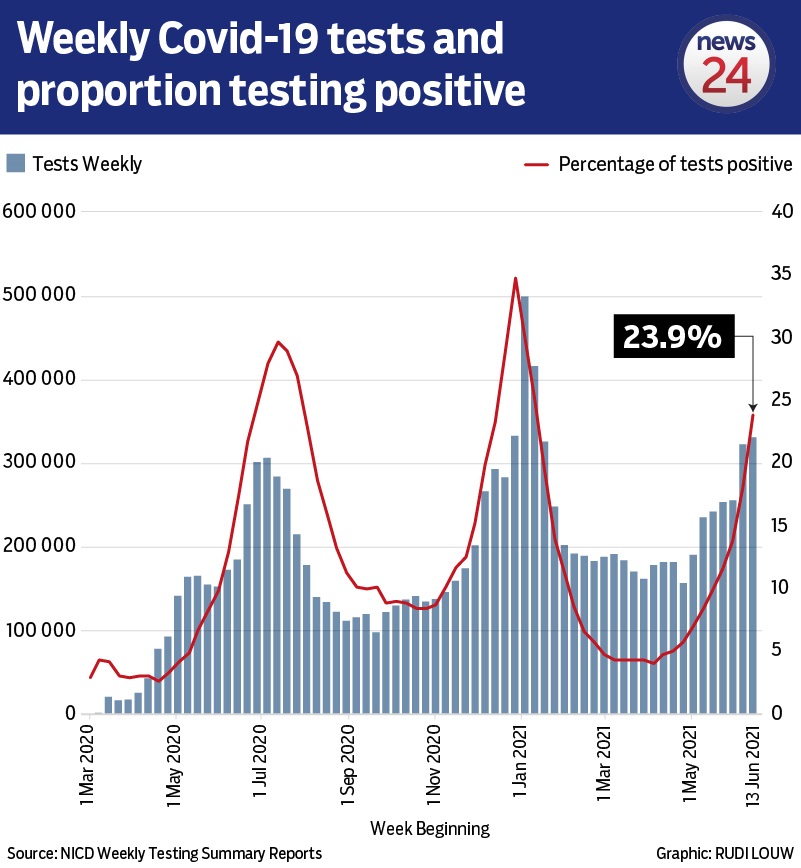 While the government has reported almost 60 000 official Covid-19 deaths, research by the SAMRC's Burden of Disease Research Unit (BDRU) and UCT's Centre for Actuarial Research (CARe) shows that an estimated 173 000 excess natural deaths have occurred in the country since the Covid-19 outbreak began. Excess deaths are calculated using an expected baseline, created with the use of data on deaths seen in the years before the virus existed. The BDRU and CARe team uses data on deaths as they are reported to the Department of Home Affairs.

This includes the reported Covid-19 deaths. The researchers estimated that 80% of the natural excess deaths they have found could be linked to Covid-19. The researchers publish a weekly report to show their updated estimates, and last week found that natural deaths in Gauteng had exceeded the expected baseline by almost double.

The research is key evidence that the official, reported number of Covid-19 deaths could be under reporting the true impact of the local Covid-19 epidemic. To support this, the BDRU's vastly experienced Professor Debbie Bradshaw, has pointed to the correlation between the timing and location of excess deaths and surges in Covid-19 cases. News24 has previously reported that this correlation is particularly noticeable when cases are mapped over time with the estimations of excess deaths – as cases increase, an increase in natural deaths follow. Ramaphosa pointed out that vaccines, such as the Johnson & Johnson and Pfizer jabs, offer protection against the Delta variant and emphasised the importance of the country's, vaccine rollout, which has been slow.

The graph below includes people who have only received one of their two Pfizer doses and who are not yet fully protected against the Delta variant.

Meanwhile, the Department of Health reported on Sunday that 2 289 people were vaccinated on Saturday. Over the past week, an average of 77 000 vaccines were administered daily. We live in a world where facts and fiction get blurred
In times of uncertainty you need journalism you can trust. For only R75 per month, you have access to a world of in-depth analyses, investigative journalism, top opinions and a range of features. Journalism strengthens democracy. Invest in the future today.
Subscribe to News24
Next on News24
More Covid-19 vaccine sites opened in Gauteng, steps taken to accommodate walk-ins

Lucky Sunday for 3 Daily Lotto players
Full list of lottery results
Lockdown For
DAYS
HRS
MINS
Voting Booth
Facebook is facing a fresh crisis after a former employee turned whistle-blower leaked internal company research. Do you still use Facebook?
Please select an option Oops! Something went wrong, please try again later.
Yes, the benefits outweigh the risk for me
32% - 2598 votes
No, I have deleted it
38% - 3080 votes
Yes, but I am considering deleting it
31% - 2519 votes
Previous Results
Podcasts
PODCAST | Ballot Box: Why Facebook is not doing enough against election misinformation