A nurse performs a swab test for Covid-19.
Michele Spartari

The number of cases and hospitalisations as a result of Covid-19 in the Eastern Cape are seeing a resurgence after weeks of ongoing, but slow, transmission.

Official, reported data shows that in the month of October the province started seeing an upward trend in the number of cases and hospital admissions and early indications are clear that a long-warned "second wave" has arrived in the province.

It is widely expected that the severity of the resurgence should be less deadly than the initial surge of cases, but it remains unclear whether the outbreaks will be controlled in time.

As of Thursday, 710 people were admitted to 98 hospitals (public and private) in the province. This was the highest number of concurrent admissions the province had seen to date, according to available data.

Fifty-two of those people were on a ventilator and 45 were in ICU.

This, in comparison to the 484 people admitted last Friday, 30 October. According to data reported by the National Institute for Communicable Diseases (NICD), a total of 13 101 people had been admitted to a hospital in the province since the start of the local coronavirus epidemic.

News24 understands the majority of the new admissions are in hospitals in Nelson Mandela Bay and Buffalo City, including private and public hospitals. The capacity of these hospitals to handle the number of patients is unclear.

In July, Eastern Cape Premier Oscar Mabuyane said the province's hospitals were "overwhelmed" and called for help from military doctors.

On Thursday, the national Department of Health reported 758 new Covid-19 cases - the highest single day case increase in the province since July.

The number of tests being conducted daily however, is unclear, as the department does not report daily testing totals by province.

Delays in the processing of test results and further delays in reporting means the official, reported data may lag by anywhere between five to 10 days. It is therefore likely that the actual situation in the Eastern Cape, particularly in the Nelson Mandela Bay Metro and Buffalo City, may be worse or improved from the picture presented by the reported data. 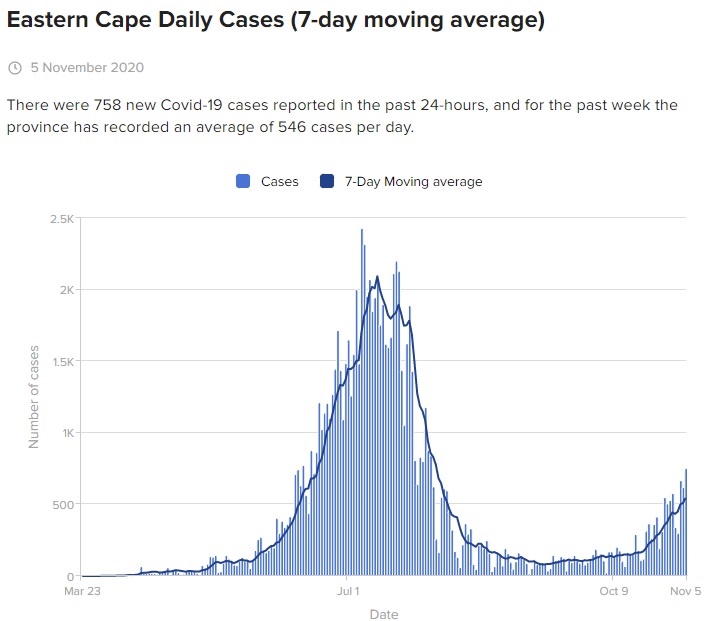 The number of reported Covid-19 cases in the Eastern Cape over time. (Graphic - News24 Covid-19 Dashboard)

We live in a world where facts and fiction get blurred
In times of uncertainty you need journalism you can trust. For 14 free days, you can have access to a world of in-depth analyses, investigative journalism, top opinions and a range of features. Journalism strengthens democracy. Invest in the future today. Thereafter you will be billed R75 per month. You can cancel anytime and if you cancel within 14 days you won't be billed.
Subscribe to News24
Related Links
Principal, deputy die of Covid-19 at Eastern Cape school
Ramaphosa's next 'family meeting' will be next week, says Minister Jackson Mthembu
'We need to speak honestly about incompetent state officials' - Prof Adam Habib
Next on News24
Babita Deokaran: Under fire Tembisa hospital boss calls on ANC connections over News24 investigation