INFOGRAPHICS | The first 90 days of Covid-19: How does SA compare to the world? A comparison of the first 90 days of the Covid-19 epidemic in South Africa with some of the hardest hit countries in the world, shows how the early lockdown in SA prevented thousands of coronavirus cases.

South Africa also managed to conduct more tests in the first 30 days of the epidemic than most economic powerhouses, such as the US and even South Korea, which has been globally recognised as having set the bar for rapid and sufficient testing to clamp down on the transmission of the virus.

While the country was quickly overtaken in terms of testing and confirmed cases by other countries where the epidemic took root much earlier in the year, insight provided by tracking the spread of the virus over the number of days the epidemic has been present, is telling. The first 90 days of the epidemic in countries such as China, the US, the United Kingdom, South Korea, Italy, Spain, Brazil and Russia, when compared to South Africa, shows that South Africa has managed to keep a handle on the transmission of Covid-19 quite successfully.

The US overshadows every other country in terms of its number of cases and the number of tests it has done, but it also shows that SA managed to keep a tighter lid on the epidemic in the first 90 days – although it must be noted SA had far more warning.

Comparatively, South Africa's Day 1 of the epidemic is 5 March, while other countries confirmed cases much earlier in January (Italy, South Korea, US) and February (Russia, Brazil, UK, Spain).

China, the epicentre of the outbreak first reported cases in December 2019.

But South Africa was put under lockdown, mass gatherings were banned as well as international travel from high-risk countries, and schools and universities were shut down far earlier in the local outbreak than most others.

A comparison of the first 30 days of the epidemic in the countries chosen, shows that SA found cases at a much higher rate than all the other countries, until being surpassed by Brazil around Day 26 of their respective epidemics. The higher number of cases found, however, is closely linked to the number of tests done. No testing data was available for Brazil, Russia and China. The US. meanwhile, only started reporting tests done on Day 47 of its epidemic, and Italy reported a little more than 4 000 tests for the first time on Day 25. SA's considerably higher number of tests for the first 30 days was down to the private sector which, in the week of 29 March to 4 April alone, conducted 11 166 Covid-19 tests, compared to the public sector's 5 683 for the same week. 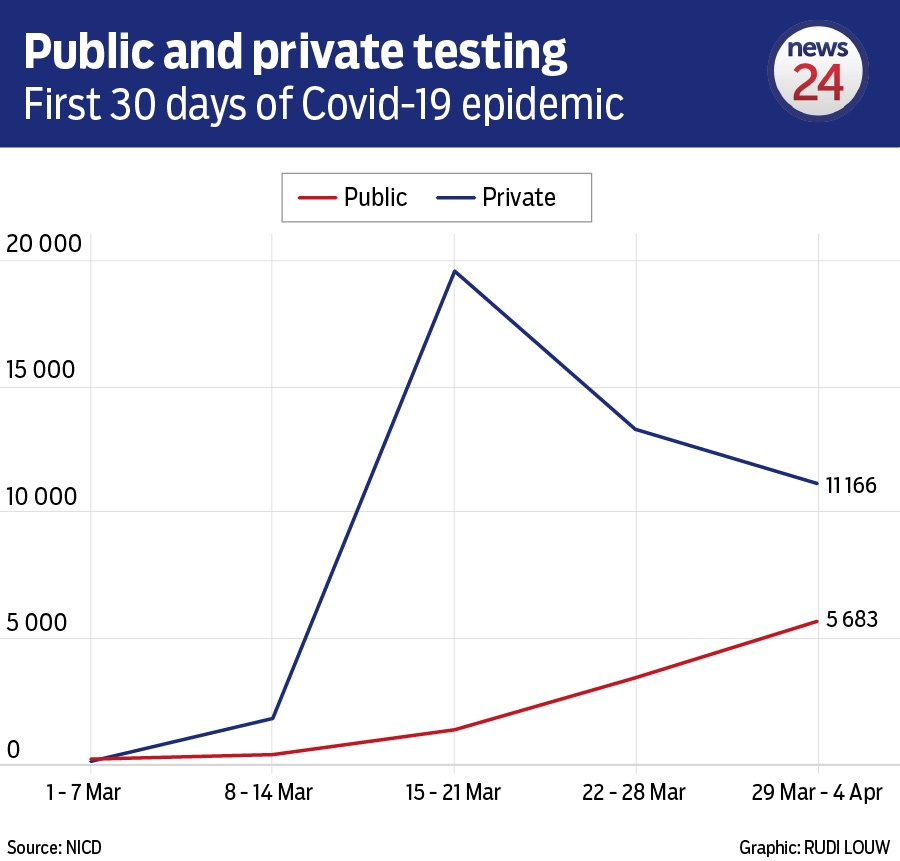 The public sector would later ramp up its capacity considerably, as seen in this week-on-week comparison of public and private tests conducted. The 30-to-60 day timeline of the various epidemics shows how SA managed to maintain a relatively low rate of epidemic growth, while the other countries quickly grew exponentially. Over this time, SA was under hard lockdown. Testing followed similar trajectories – a logical correlation – for most countries. Between Day 30 and 60, SA was still tracking other countries closely. These countries, however, had less time to plan and put in place testing regimens – their progress is reflected clearly in the 1 to 90 days graphic. It is apparent that the US was slow off the mark in terms of testing for Covid-19, but it has since surpassed the rest of the world. As seen in this graph, the US only started reporting tests done on Day 47 of its outbreak – but in 13 days, the country conducted 161 543 tests.

Between Day 30 and 90, South Africa's number of cases pale in comparison to the rest of the countries. But comparatively, the US again tested more than any other country. This shows that, for the first 90 days of the epidemic, SA tested on par with some of the biggest countries in the world - and found less cases.

Important notes about this article:

We live in a world where facts and fiction get blurred
In times of uncertainty you need journalism you can trust. For only R75 per month, you have access to a world of in-depth analyses, investigative journalism, top opinions and a range of features. Journalism strengthens democracy. Invest in the future today.
Subscribe to News24
Related Links
International Covid-19 news: Africa needs to 'triple its testing', 'US picks companies to develop...
PODCAST | Covid-19 Chronicles: Urgent measures needed to address testing backlog crisis
Citizens who trust Ramaphosa willing to sacrifice human rights to curb Covid-19 spread, survey finds
Next on News24
EXCLUSIVE | Bheki Cele: Blame Khehla Sitole for July unrest, not me

Lucky Sunday for 2 Daily Lotto players
Full list of lottery results
Lockdown For
DAYS
HRS
MINS
Voting Booth
President Ramaphosa has punted the idea of mandatory Covid-19 vaccinations for South Africans. This is:
Please select an option Oops! Something went wrong, please try again later.
The right thing to do. We desperately need more South Africans vaccinated to prevent further mutations and restore normality in our lives.
71% - 9917 votes
A risky strategy. Compulsory vaccinations may have unintended consequences and damage our rollout campaign.
29% - 3994 votes
Previous Results
Podcasts
PODCAST | The Story: The Omicron variant and what we know so far