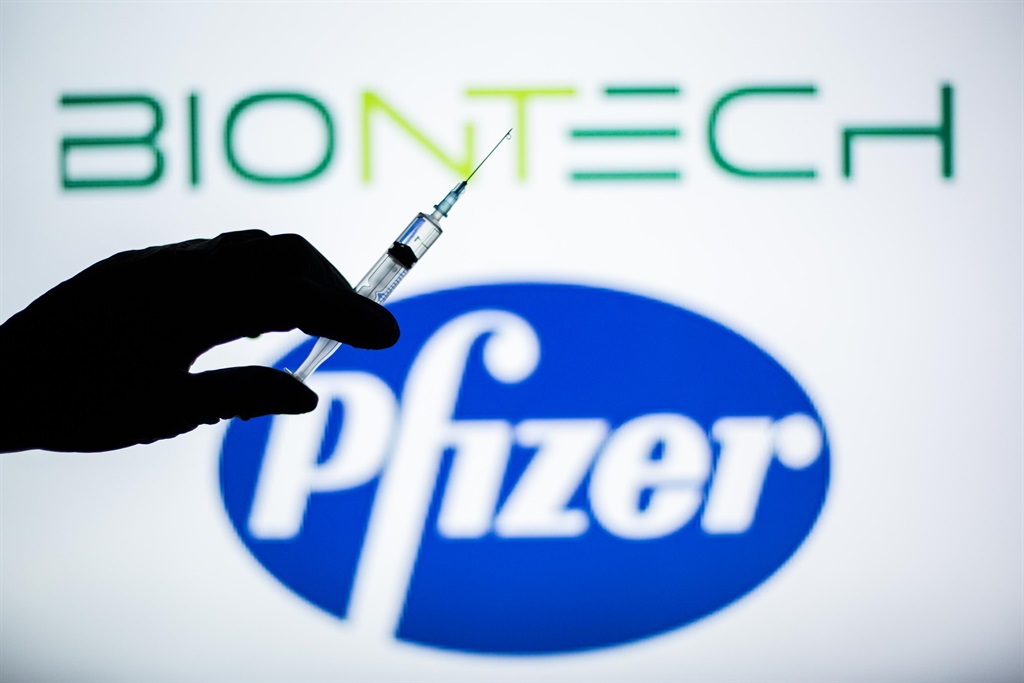 In this illustration, a hand of a person seen holding a syringe in front of the Pfizer and BioNTech logo.
Photo Illustration by Thiago Prudêncio/SOPA Images

Health officials were allegedly not responsive to requests from global pharmaceutical company Pfizer to discuss potential uptake of its Covid-19 vaccines for "months and months", a leaked phone call with a senior Pfizer employee reveals.

The leak comes as the health department continues to deny that it delayed in engaging in crucial discussions over vaccine deals early enough and, while some deals have been announced, not a single dose of any vaccine has yet arrived in the country.

"South Africa had started thinking about vaccines a long time ago, with our early meetings with some manufacturers in July 2020," a health department spokesperson told News24 last week.

But, in the leaked recording, the Pfizer employee, whose identity is known to News24, can be heard explaining to a Northern Cape businessman, Freeman Bhengu, that after the July 2020 meeting, the health department had not been responsive to requests from Pfizer.

"We tried to speak to the [health] department for many, many months," the Pfizer employee said on 29 December.

We managed to speak to them, I think our first discussion was in July. And then very little happened in terms of progress. And we kept following up and following up and, I think, when they started the MAC, we then requested to meet with the MAC. We had one meeting with the MAC, but they didn't give us any guidance in terms of what, how they are going to procure the vaccines.

Health Minister Zweli Mkhize announced the establishment of a Ministerial Advisory Committee (MAC) on vaccines on 14 September. At that stage, several countries had concluded bilateral deals with Pfizer and BioNTech, the German pharmaceutical company that partnered with Pfizer to produce a Covid-19 vaccine.

"As I said, we tried talking to the government months ago, months ago. And I will be very frank with you, they really were not responsive," the employee said later in the call.

The Pfizer employee explained that they are not unwilling to provide vaccines to the country,

"Globally, the demand for the vaccines obviously is very, very high. So, this has now become the issue, it's not a question of whether we want to or not, it's become a question of quantity and whether there are available doses," they said.

The health department had since started reaching out in earnest, the Pfizer employee explained, and described health officials as "focused and serious".

The employee said earlier in the call:

We are talking to the government…but, unfortunately, to be honest with you, the South African government has been very late to have these kinds of conversations. Because when we tried to reach out to them a number of months ago, I don't know what was causing them to be delayed, but they were not in the position to have a more meaningful conversation

Bhengu, a self-described businessman and public coordinator of the Sonke Public Forum, can be heard throughout the call expressing a wish to litigate against the government to force a more open procurement process, whereby the private sector could procure its own doses.

He said his call to the Pfizer employee was prompted by curiosity and concern.

In the face of criticism over delays in concluding vaccine deals and a consistently rising Covid-19 death toll, the health department has repeatedly denied it delayed discussions with vaccine makers.

South Africa is widely regarded as the country hardest hit by Covid-19 on the African continent, with more than 1.3 million confirmed cases and a reported death toll of 37 000. Excess deaths research provides an estimated Covid-19 death toll at closer to 70 000.

"We did not sign bilateral agreements, given the uncertainties (effectiveness, safety, delivery date) that were associated with them. In September and October, this information was not yet available to us," a health department spokesperson said on Friday.

Pfizer and BioNTech announced results from phase three trials, which showed the vaccine was 95% effective, on 18 November.

ALSO READ | AstraZeneca can't sell Covid-19 vaccines in SA, despite government claims of being in talks for months

Additional doses may come from a series of agreements the African Union concluded with various vaccine makers for 270 million doses.

The arrival date of any of these vaccines remains unclear.

The Pfizer/BioNTech vaccine presents a unique challenge for countries that do not have existing super cold storage mechanisms along its supply and distribution chain. Doses of the vaccine need to be stored at -70 degrees Celsius.

But in the leaked recording of the conversation Bhengu had with the Pfizer employee, it is revealed that Pfizer was able to arrange for just-in-time delivery, which would not require South Africa to store vast amounts of the vaccine for long periods of time.

Midrand-based company Labotec confirmed to News24 on Tuesday that it has ultra-low temperature freezers available that can store roughly 235 000 doses of the vaccine at the required temperatures. The estimated cost of just one such a freezer was in the region of R300 000, a Labotec representative said.

Some countries, the Pfizer employee explained, had bought only two such freezers.

"But the point of the matter is these doses, we are delivering on the basis of just-in-time delivery, so when we bring it, you don't need to stockpile vaccine, you don't need mass storage facilities," they added.

Bloomberg reported on 3 January that President Cyril Ramaphosa's office had told the publication that a discounted rate of R150 per dose offered by Pfizer was "still prohibitive".

South Africa will pay roughly R300 per dose for vaccines through Covax.

We live in a world where facts and fiction get blurred
In times of uncertainty you need journalism you can trust. For 14 free days, you can have access to a world of in-depth analyses, investigative journalism, top opinions and a range of features. Journalism strengthens democracy. Invest in the future today. Thereafter you will be billed R75 per month. You can cancel anytime and if you cancel within 14 days you won't be billed.
Subscribe to News24
Related Links
A cancelled meeting, delays and secrecy: Inside SA's efforts to procure Covid-19 vaccine doses
'We were not sleeping on the job': Ramaphosa, Mkhize allay vaccine delay fears
Covid-19 vaccine rollout: Military roped in, health professionals to help manage adverse reactions
Next on News24
Billions for SA's energy transition: 'We'll build in safeguards' - German donors, as Eskom fears graft