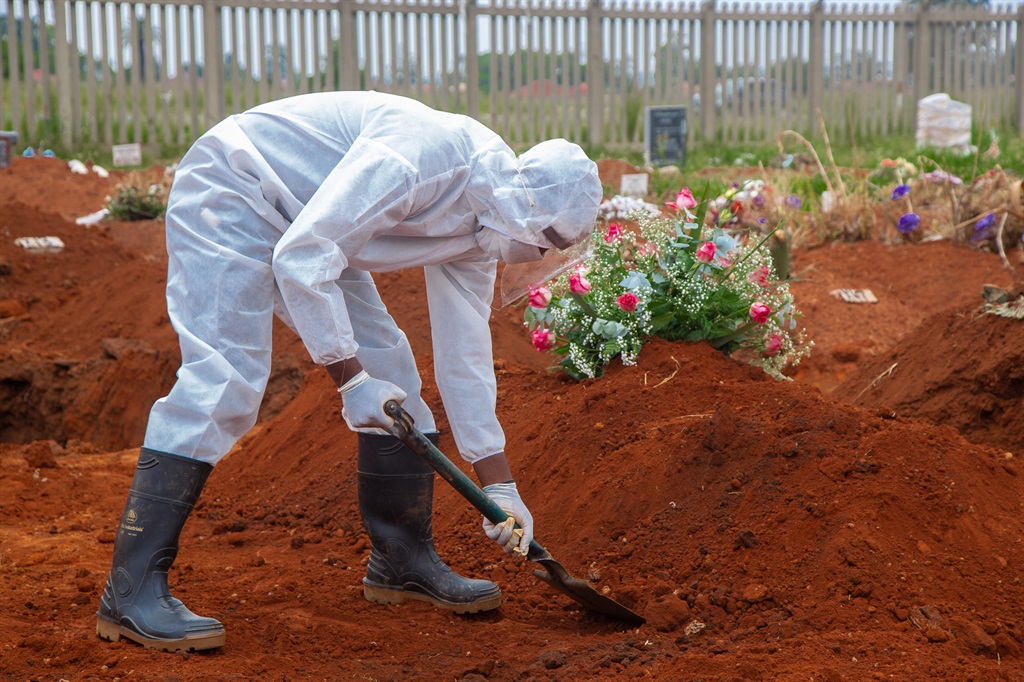 A man, dressed in protective clothing, works at a grave in Vlakfontein Cemetery on 8 January 2021.
OJ Koloti, Gallo Images

South Africa's actual death toll linked to the Covid-19 local epidemic could be as high as 128 000 as of early February, according to a new report that was released on Wednesday.

As of 8 February, the national Department of Health reported 46 473 deaths from Covid-19, compared to an estimated 135 000 excess deaths. As of early March, the official number of reported deaths was above 50 000.

A lower estimate of 114 000 was also presented, based on different calculations of collateral deaths.

Either of these estimates would place South Africa among the worst-hit countries in the world, based on known deaths per 100 000 people.

Only five countries have recorded more than 100 000 deaths, including the United States, Brazil, Mexico, India and the United Kingdom, according to Johns Hopkins University.

This analysis is skewed however, as the researchers point out, because it is based on reported deaths from other countries, where the underlying excess mortality is yet to be clearly defined.

Research on excess mortality has consistently shown that the official number of deaths was underreporting the true impact of Covid-19.

The team of researchers who have prepared the estimates is made up of scientists from the South African Medical Research Council's Burden of Disease Research Unit and the University of Cape Town's Centre for Actuarial Research.

Excess deaths are determined by comparing the number of deaths reported to the Department of Home Affairs, classified as being from natural causes and unnatural causes, and comparing these deaths with historical trends seen in previous years, when Covid-19 was not spreading.

READ | SA's true death toll from Covid-19 could be among highest in the world per capita, research shows

In addition to the weekly excess mortality report published this week, a supplementary report was also made public. In the report, the BDRU and CARe teams estimate for the first time, the proportion of excess natural deaths that could be attributable to Covid-19.

"We estimate that nationally, 85-95% of the excess natural deaths are attributable to Covid-19.

"The remaining 5-15% of the excess deaths are considered to be attributable to collateral causes, probably mainly due to overwhelming of the health services during surges in the pandemic," the report reads.

Collateral causes mean people who died as a result of not being able to access healthcare services or being too afraid to seek healthcare for fear of Covid-19.

"A comparison of the time trends in excess deaths, the confirmed Covid-19 deaths (by date of occurrence), and proportions testing positive for SARS-CoV-2 by province makes it quite clear that these excess deaths are directly related to the Covid-19 pandemic," the report states.

The BDRU's Professor Debbie Bradshaw, in June last year, first confirmed that they had found a "huge discrepancy" between the number of reported Covid-19 deaths and natural excess deaths.

She said at the time that there was no doubt, considering the timing and location of the excess deaths, that they were linked to the Covid-19 local epidemic.

This new research supports this and includes additional comparisons which strengthen the evidence that a high number of excess natural deaths are linked to Covid-19.

News24 previously reported that the health department refused to acknowledge underreporting Covid-19 deaths. When presented with an analysis showing the strong correlation between the timing and location of excess natural deaths and spikes in Covid-19 cases, it maintained that the excess deaths were only an estimate, and could not be confirmed as deaths linked to Covid-19.

We live in a world where facts and fiction get blurred
In times of uncertainty you need journalism you can trust. For only R75 per month, you have access to a world of in-depth analyses, investigative journalism, top opinions and a range of features. Journalism strengthens democracy. Invest in the future today.
Subscribe to News24
Next on News24
News24 reporters win 2021's prestigious Taco Kuiper Award for investigative journalism