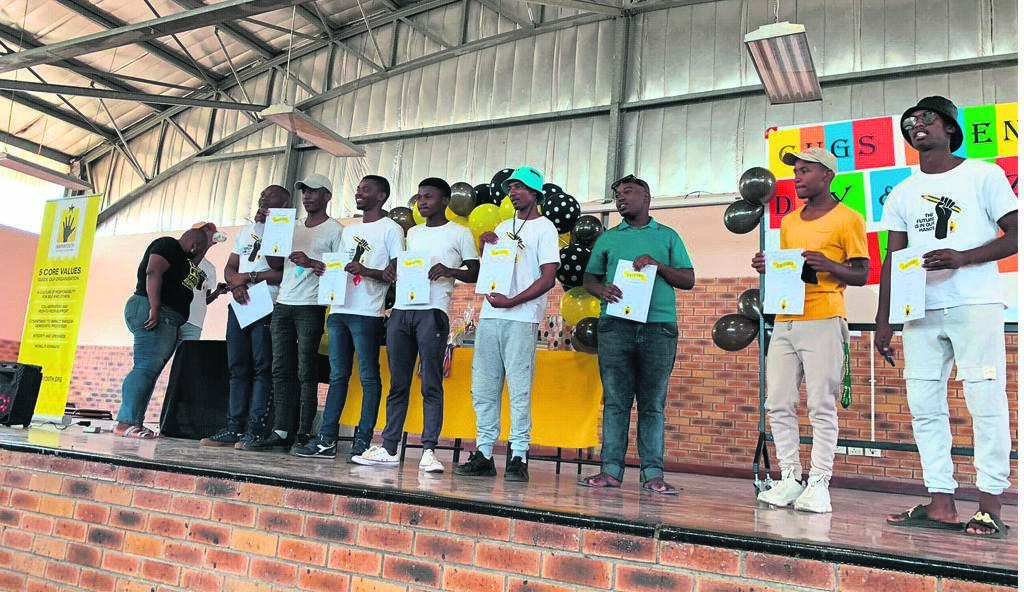 Some of the former matric learners who were awarded with certificates during the event.

Hundreds of high school learners from Gugulethu and the surrounding communities converged at Intshukumo High School on Saturday 5 February for the launch of this year’s afternoon classes programme.

Organised by Ikamva Youth, the programme is designed to offer learners additional curriculum support on weekends and in the afternoons.

The event also paid homage to learners who previously took part in the initiative. They were handed certificates.

Zamile Hlongwane, Ikamva Youth branch coordinator in Gugulethu, said they also wanted to inform the learners about the new programmes.

“Today is our opening day for this year’s programme and we are also giving the certificates to our learners who were attending last year in an effort to encourage them and also trying to attract other learners to join us,” said Hlongwane.

“We are tutoring all the subjects. We have two staff members and 20 tutors who are volunteering in the organisation to assist the learners,” she said. She added that last year they had more than 200 learners from 21 schools.

“For now I’m not sure about the number of high schools that we are working with because their learners are still coming. We were supposed to accommodate at least 130 learners but because of the number of learners who are coming in, the number is already more than that,” she explained.

Hlongwane stated they are happy to work with all the learners, but do not hesitate to expel unruly characters.

“We are not only assisting them with their studies but we instil discipline. We also do mentorship,” she said.

Out of all the learners who joined the programme last year matric pass rate was 98% with eight distinctions. While in 2020 matric results were 89% pass rate with 20 distinctions, Hlongwane said.

She added that they are working with some institutions to help the learners.

“Some of the institutions that we are working with are the University of Cape Town, False Bay College and Amandla Safe Hub organisation. We encourage them (learners) to apply at these institutions,” she said.

Former ID Mkhize High School learner Zimkhitha Yawa (19) hailed the programme. She said it helped her academically and socially. “I’ve got two distinctions in both English and Business Studies. Their tutors are very good and dedicated to their job. They have patience. They assisted us in applying to universities,” said Yawa, describing Ikamva as a safe place to study.

Parent Thandeka Tshaka labelled the programme as a good initiative. She added that it has helped her child a lot. “Initially I didn’t understand why she was studying after school until I saw the improvement in her studies. I then took the organisation seriously. The programme also helps our children to stay away from doing wrong things on the streets because they are always busy during the weekends,” said Tshaka.

She urged other parents to encourage their children to join the programme.

Here are the Daily Lotto results
Full list of lottery results
Voting Booth
As a parent, what do you struggle to find money for?
Please select an option Oops! Something went wrong, please try again later.
Nappies, they cost too much
7% - 304 votes
Formula and food, it's getting so expensive
18% - 806 votes
Creche and school fees are a struggle every month
76% - 3480 votes
Previous Results
Podcasts
PODCAST | The Story: What is behind Khayelitsha's recent mass shootings?