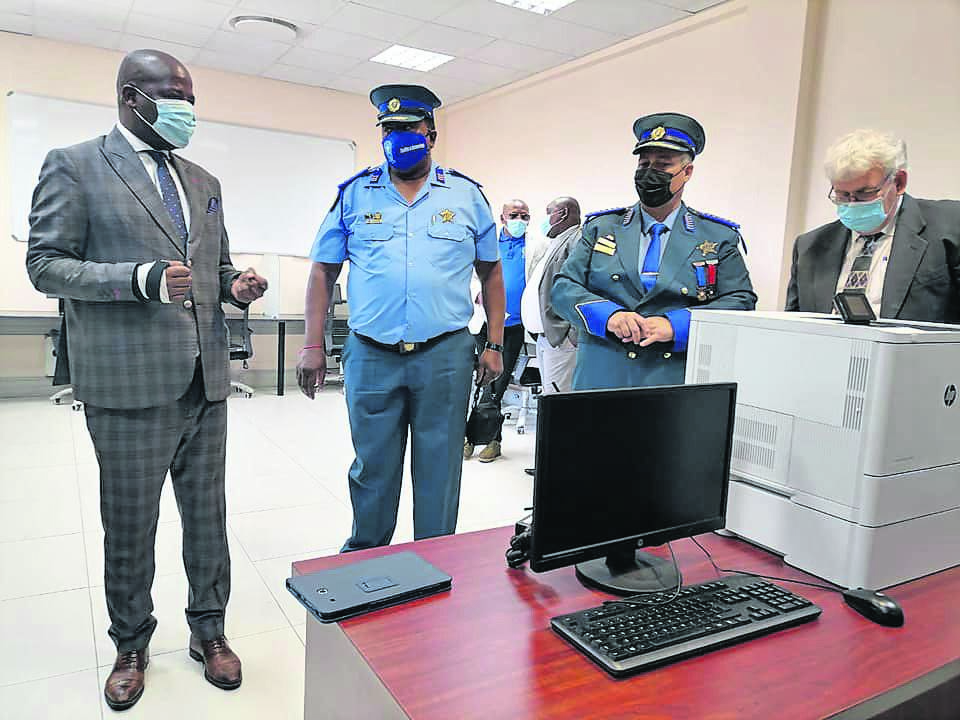 This photo was taken during the launch of the Motherwell Driving Licence Testing Centre in October last year.
Photo: Supplied

The absence of a registration certificate, costing less than R7 000, is the only thing standing in the way of the brand-new Motherwell Driving Licence Testing Centre opening its doors to the public.

This state-of-the-art centre was launched in October last year and welcomed by residents as it would provide substantial relief to the over-capacitated centres in Korsten and Kariega.

Despite the launch, attended by then mayor, Nqaba Bhanga, and relevant metro officials, the doors have remained firmly shut because the Nelson Mandela Bay Municipality is yet to receive the registration certificate for the facility, costing R6 909.

To make matters worse, the municipality has indicated to the Eastern Cape Department of Transport that it is ready to pay the amount for the certificate to be issued but needs a proper tax invoice from the department first.

The department is yet to issue the municipality with a tax invoice, sending a pro forma invoice instead. These are some of the facilities that residents can enjoy at the Motherwell Driving Licence Testing Centre once it opens its doors.

Ward 8 Councillor, Gustav Rautenbach, said that the matter came to his attention in December last year.

“The opening of the Motherwell Driving Licence Testing Centre is something that everyone looked forward to because it would have been beneficial to the whole metro. Thousands of residents could have benefited from this; the queues would’ve been shorter and a drastic change, for the better, would have taken place with the online booking system,” Rautenbach explained.

“The major problem is that the municipality wrote to the Department of Transport in the Eastern Cape, informing them that supply chain management insists on receiving a tax invoice and not a pro forma invoice.

He added that after doing his homework, he learnt that a pro forma invoice is only a draft invoice that doesn’t have the same legal importance of an actual tax invoice. It is also a normal process for the municipality to request a tax invoice in this case.

“My homework tells me that a pro forma invoice cannot be used to claim tax and payment cannot be made on it as it is not an official document. It is of great concern that this centre has not yet opened its doors. Apart from lack of service delivery, it is a loss of income that could be generated,” he added.

Municipal spokesperson, Kupido Baron, confirmed that the municipality has been struggling with this issue since last year.

“I can confirm that we have had this issue since last year but the efforts of our head of traffic and licencing, Warren Prins, paid off. We have resubmitted our documentation and the bottleneck is now resolved,” Baron said.

“We launched the Motherwell Driving Licence Centre last year after construction work was completed. Due to delays to get the required documentation, we could not open the facility as yet. However, we are in the process of overcoming this hurdle and will be able to start with operations within weeks after obtaining the required paperwork,” he added.

Eastern Cape Department of Transport spokesperson, Unathi Binqose, said that there was clearly is a slight misunderstanding between the department’s finance unit and that of the Nelson Mandela Bay Municipality.

“That is something that we will attend to with the urgency that it deserves.

“It is certainly not true that the department does not want to send a proper invoice, it must be down to the misunderstanding I have just raised, but we will attend to it and get the centre up and running as soon as possible,” he said.

Binqose added that he would be visiting the department’s finance unit at the beginning of this week to find out exactly what the misunderstanding was.

“All it takes is for us to send through a proper invoice so that they can pay and we can get this thing over and done with,” he said. One of the eye testing machines available at the facility.
We live in a world where facts and fiction get blurred
In times of uncertainty you need journalism you can trust. For 14 free days, you can have access to a world of in-depth analyses, investigative journalism, top opinions and a range of features. Journalism strengthens democracy. Invest in the future today. Thereafter you will be billed R75 per month. You can cancel anytime and if you cancel within 14 days you won't be billed.
Subscribe to News24
Next on News24
NELSON MANDELA BAY | More than twenty traffic lights out in the metro

Here are the Daily Lotto numbers
Full list of lottery results
Voting Booth
Have you and your family been counted in Census 2022?
Please select an option Oops! Something went wrong, please try again later.
Yes
47% - 3246 votes
No
53% - 3627 votes
Previous Results
Podcasts
PODCAST | The Story: How one incident at Stellenbosch University sheds light on deeper issues