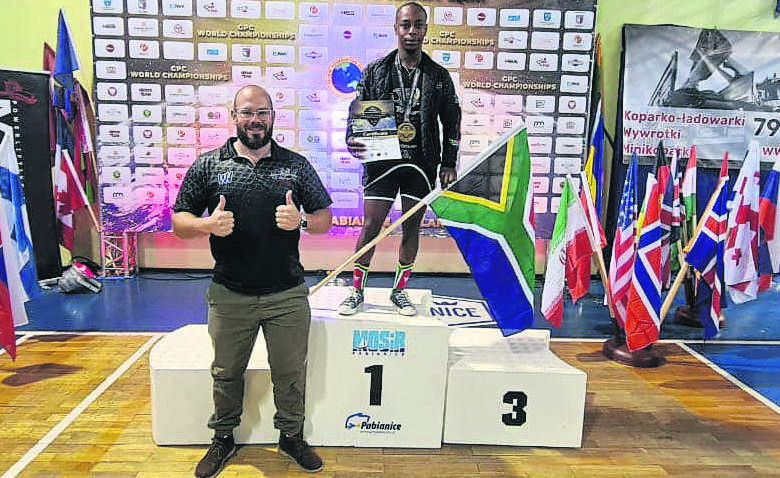 Mandla Tshwaku and his coach and educator at Westview School, Jaco Koen. Photo:supplied

WHEN the GPC Powerlifting World Championships, scheduled to take place in the Czech Republic in 2019, were cancelled due to COVID-19, this learner from Westview School in Nelson Mandela Bay thought that he had lost out on an opportunity to showcase his talent and hard work.

However, after the championships were finally recently held in Poland, 19-year-old Mandla Tshwaku, the only South African to compete at this event, not only accomplished four world records, but walked away with the title of world champion in his division.

Mandla, who grew up in KwaZakhele with his mother and little brother, started powerlifting in June 2018, after being approached by a former educator, Ferdi Gerber, who started the sport at the school.

He immediately fell in love with the demanding sport and said that Gerber had been his inspiration since.

According to Mandla, although the championship that he qualified for two years ago was cancelled, he never stopped being committed and trained even harder, knowing that there would be another opportunity in the future.

When asked how he felt about his achievements, Mandla said that it felt unreal.

“I was confident in the squat and bench press but very nervous about the dead-lift, so I was very surprised and happy that I pulled off the world record in dead-lift,” he said.

“I look up to people like Arnold Schwarzenegger. He is such an inspiration and role model to many people in body building. He also shows many qualities of good leadership, especially how a leader should be in the fitness world.

“I also admire the retired Kai Greene and Ronnie Coleman, for being world champions in body building and powerlifting numerous times, and finally the world’s strongest man in 2017, Eddie Hall, for 500kg dead-lifting,” Mandla explained.

He added that his goals were to improve his technique and train more in order to increase his current abilities.

“I want to be able to do the following lifts before the end of 2022: 155kg squat, 95kg bench press and 190kg dead-lift. These weights are close to the Junior World Record, which is the division in which I will be competing for the following four years,” he said.

“I would like to thank my coach, Mr Jaco Koen, and my principal, Mr PC van Rooyen. I also appreciate the Department of Education’s contribution. I would not have achieved this without them.

“They really went the extra mile in organising everything and made this opportunity possible. I am humbled and grateful to them and the rest of Westview School.”

Van Rooyen said that the school is tremendously proud of Mandla’s outstanding achievement.

“It gives us, as teachers, such a satisfying feeling that our job is not just an ordinary job that we go to every day. It is a passion and we strive every day to help our learners in reaching their dreams!

“Westview is so proud of you, Mandla! You showed the whole world that if you put your mind to it and work hard in life, you will succeed! Congratulations!”

The school also wished to thank a few people at the Department of Education for organising a sponsorship for Mandla to travel to Poland.

“If it weren’t for them, we would not have had enough funds to sponsor him with his travelling.

We live in a world where facts and fiction get blurred
In times of uncertainty you need journalism you can trust. For only R75 per month, you have access to a world of in-depth analyses, investigative journalism, top opinions and a range of features. Journalism strengthens democracy. Invest in the future today.
Subscribe to News24
Next on News24
Gqeberha's ‘Weather Guru’ celebrates 40 years at SAWS