Wheelchair Wednesday with a difference rolled out 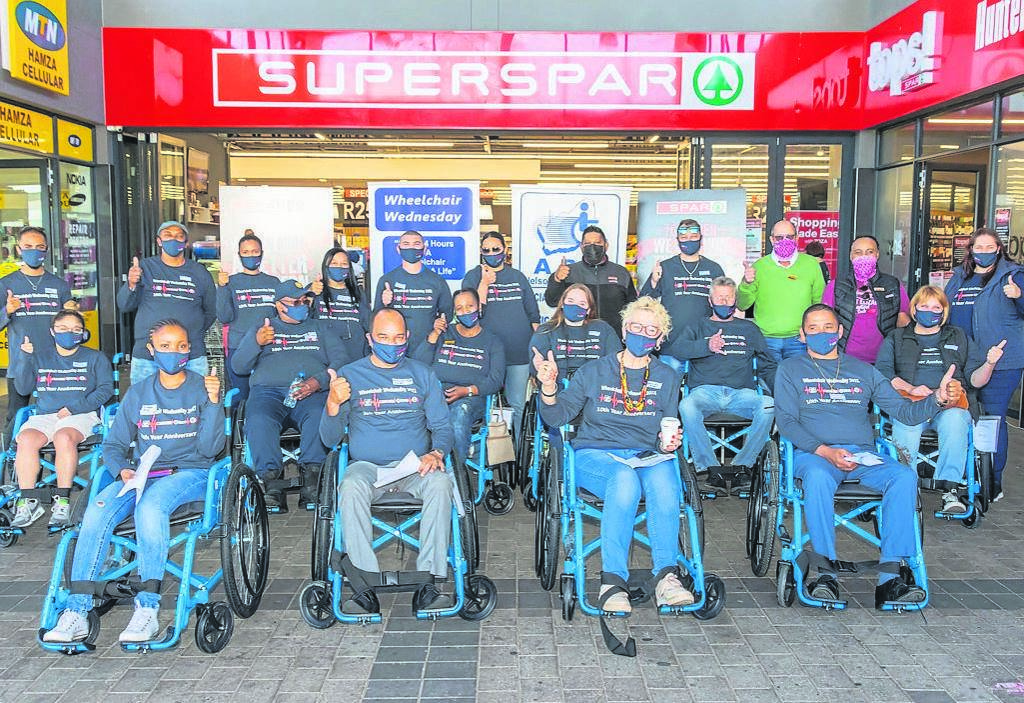 Among others, several members of the metro were invited to spend 67 minutes in a wheelchair as part of the annual SPAR Wheelchair Wednesday project. Photo: Supplied

THE 10th annual Wheelchair Wednesday campaign was launched with a difference when the opening roll-out took place at SUPERSPAR Hunters in Gqeberha on Wednesday, October 7.

As a starting point, SPAR Eastern Cape and the Association for Persons with Physical Disabilities Nelson Mandela Bay (APD) used the occasion to honour Nelson Mandela by putting participants in a wheelchair for 67 minutes instead of the previous four hours.

During this time, they were provided with a list of tasks to demonstrate the challenges people in wheelchairs were faced with.

The organisers continued to increase the scope of the project by joining hands with the Nkosinathi Foundation for the visually impaired this year.

The wheelchair assistants were given simulation spectacles to wear during the 67 minutes to experience the difficulties of people who had failing eyesight.

It followed the move last year when the Amputee Support Group (ASG) was invited to join the project, creating an opportunity to collect crutches, and walking aids to distribute to those in need.

ASG is involved again this year and any walking aids which are not used by the public can be put in containers at participating SPAR stores.

Among others, a number of high-profile personalities from various metro departments joined the occasion and mayoral committee member for budget and treasury, Malcolm Figg, described the exercise as an eye-opener.

“It really made us aware that not enough attention is given to the needs of physically disabled people,” he said.

“I was fortunate in that, firstly, I had a helper and, secondly, I knew that if I struggled, I could just get up and walk. This luxury is not experienced by differently abled people.

“It shows us that so much more effort is needed to improve facilities to ensure that these people live as normal a life as possible.”

His time in the chair epitomised the words of SPAR EC promotions and events manager, Alan Stapleton, who said the participants would be humbled by the experience.

“It really was like that, but it was also rewarding to know that we would now have more respect for our community members who are differently abled,” said Figg.

Stapleton emphasised the need for facilities and amenities throughout the metro to be improved to satisfy the needs of wheelchair users.

“We have at times found that our amenities are embarrassing in how they cater for the disabled and your time in the wheelchair will help to raise awareness of what needs to be done,” said Stapleton.

He added that SPAR’s sponsorship of Wheelchair Wednesday was a very special one as it changed the lives of so many people.

“All those people have been released to move out of their homes, receiving some sort of freedom in their mobility, and that is so rewarding for us,” he said.

In another change which provided a poignant moment at the launch, five disabled people received their wheelchairs, instead of having to wait for the traditional handover once the campaign was completed.

As Stapleton handed over a SPAR voucher to each of them he said, “To those who are receiving wheelchairs today, enjoy your freedom and enjoy that extra bit of mobility.”

He also paid a special tribute to the staff of APD for their contribution to the cause.

“Thank you for all the magnificent work you do to make life for disabled people easier and for putting this whole campaign together.”

We live in a world where facts and fiction get blurred
In times of uncertainty you need journalism you can trust. For only R75 per month, you have access to a world of in-depth analyses, investigative journalism, top opinions and a range of features. Journalism strengthens democracy. Invest in the future today.
Subscribe to News24
Next on News24
ADVERTORIAL | rain 5G now available in Gqeberha