For the Common good 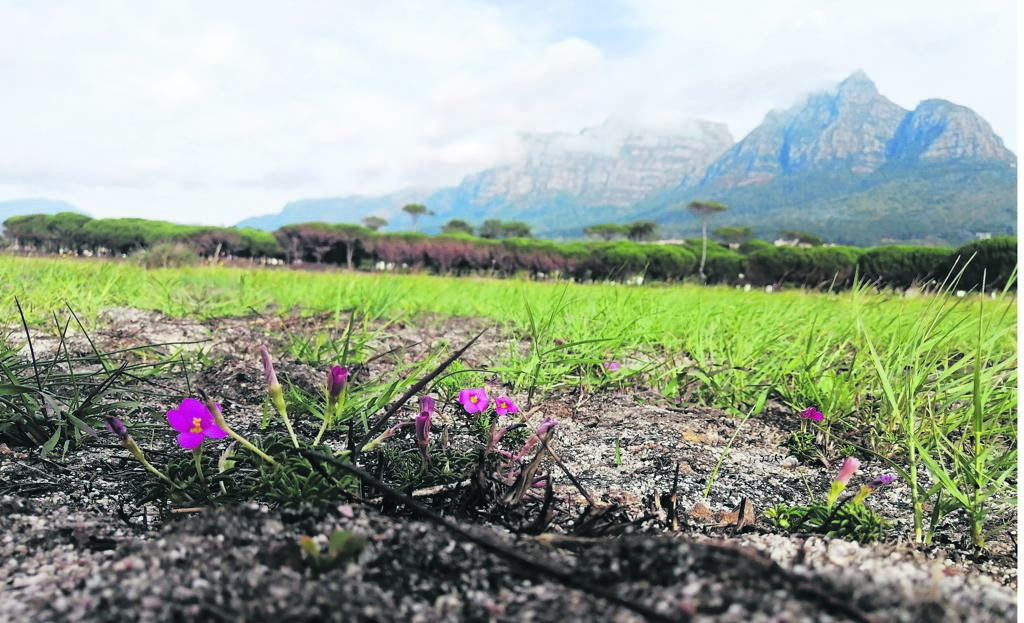 An initiative spearheaded by the Friends of Rondebosch Common sees volunteers meet every Thursday morning to pick up litter, and now also to remove alien invasive plants. PHOTO: Nettalie Viljoen

A small group of Rondebosch residents have again proved how much can be achieved when people unite behind a common cause.

Avid walkers and runners who make use of the perimeter path encircling Rondebosch Common may have noticed that the amount of litter usually scattered across the 40-hectare conservation area has been much reduced. This huge improvement is thanks to the ongoing efforts of a small group of clean-up volunteers who call themselves, you’ve guessed it, Common Cause.

Brett Adams, chair of Friends of Rondebosch Common (FRC), launched the initiative – which is open to all – in February. Since then, eight to 10 volunteers have met every Thursday at 09:00 at the Common parking lot. Armed with rubber gloves, braai tongs, and clean-up bags (sponsored by Tuffy), they pick up discarded trash for the next hour.

“We initially focused all our attention on one corner of the Common, but over the past weeks, we have been able to spread out across different sections. These efforts make a tremendous difference and we have received feedback on how much cleaner the Common is looking,” Adams says.

He also ascribes the improved conditions at the Common to the presence of the new QUEMIC park rangers who were appointed by the City of Cape Town after two big fires broke out at the conservation area on Thursday 21 January and Monday 7 February (“Fire to spark diversity”, People’s Post, 16 February).

“The park rangers have been pitching in for the past two months and I am amazed at what a difference to security they have made. They keep vagrants away, allowing us to get on with our work. Some residents were hesitant to visit the Common because of vagrants who were sleeping here but with them gone, visitors have increased. I even saw a young woman sitting under the trees last week, playing her guitar,” Adams says.

However, he says on Friday night (16 April) there was an unknown vagrant “aggressively” begging under the trees opposite Rustenburg Girls’ High School.

“It concerns me that one person with obnoxious behaviour can ruin that part of the Common for so many people now enjoying their evening walk (as a result of the new-founded safety and security of the park rangers). We have to stand up and take back what is ours,” Adams says.

People’s Post visited the site just after 09:00 on Thursday 15 April to find Common Cause hard at work. Besides collecting litter, some volunteers were also busy removing the invasive sow thistles from the ground.

Adams explains that with the problem of litter mostly under control, they can now focus some of their attention on removing weeds and alien invasive plants, allowing indigenous plants to grow unfettered.

“The Common is home to critically endangered Cape Flats Sand Fynbos, the odd patch of Renosterveld and a seasonal wetland. At least nine plant species found on this core conservation site are on the SANBI Red List (the South African National Biodiversity Institute’s online list which provides up to date information on the national conservation status of indigenous plants),” he says.

Jenny Strong, one of the volunteers who was busy pulling out the yellow-flowering plants, says people often make the mistake of thinking that the Common is just a wide-open field. “But if you look closely, you will discover it is a proverbial Garden of Eden. With the beautiful view of the mountain, this is a place where you can come to be in your own space, where you can be at peace.”

Strong believes it is everyone’s responsibility to do something good for the larger community.

“The Rondebosch Common belongs to everybody. This is what we have. We can’t allow it to deteriorate into a dump.”

She also gives a shout-out to Fay Howa, principal technical assistant – environmental manager at the City of Cape Town’s recreation and parks department who Strong describes as their guardian angel.

“And Sivumo who is employed by the City. He works on the Common on Thursdays and Fridays. He is also an angel who just quietly gets the job done; picking up litter, removing alien invasive plants.”

On the other side of the Common, People’s Post encountered Wendy Praetorius. She was busy picking up trash, yielding her braai tongs like an expert. Praetorius, who calls herself a walker, says she joined the group a few weeks ago after spotting the volunteers on the Common.

“What is extraordinary is that I have seen other people collecting trash on different days of the week. They must have cottoned-on and started doing it.”

However, Praetorius says, she also sees a lot of people who are still littering.

“We live on this planet and we need to take care of it. And it is such a small ask of everyone; not to drop their litter.”

Adams says there is no obligation to join or help.

“But if you have an hour to spend on a Thursday morning, your participation would be greatly appreciated. We would love you to join us.”

3 bag the Daily Lotto jackpot!
Full list of lottery results
Voting Booth
As a parent, what do you struggle to find money for?
Please select an option Oops! Something went wrong, please try again later.
Nappies, they cost too much
6% - 210 votes
Formula and food, it's getting so expensive
18% - 598 votes
Creche and school fees are a struggle every month
76% - 2557 votes
Previous Results
Podcasts
PODCAST | The Story: What is behind Khayelitsha's recent mass shootings?