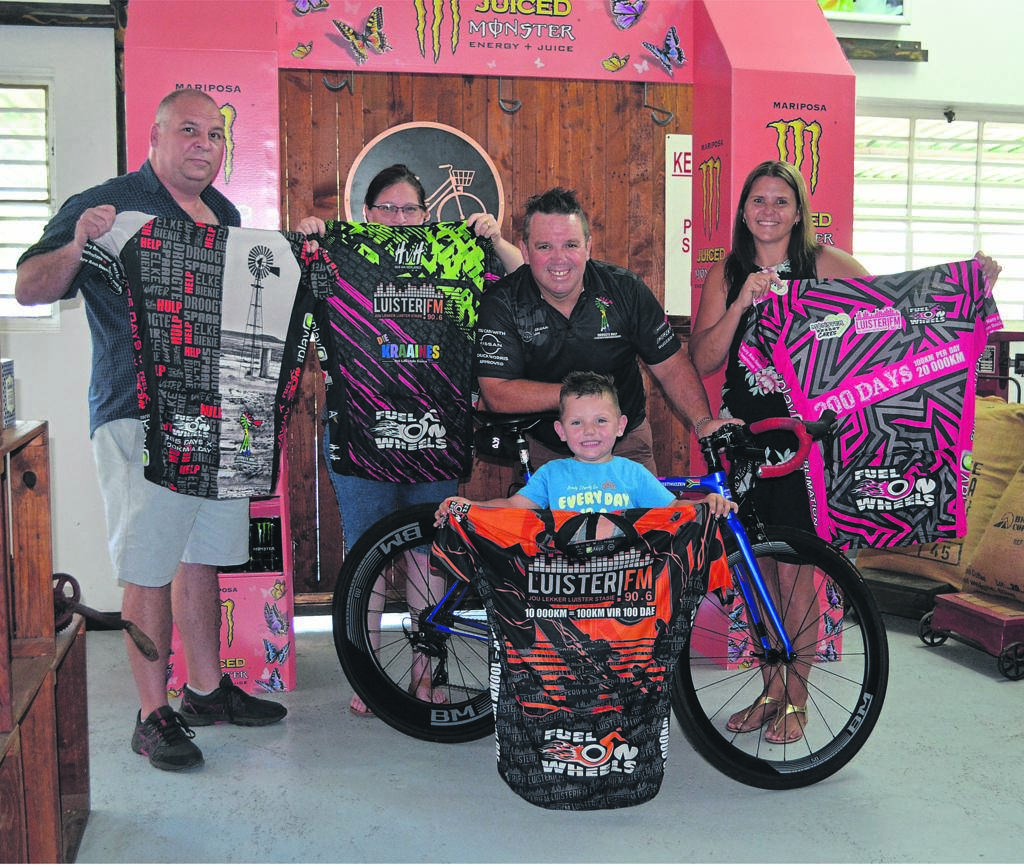 ‘Crazy’ cyclist Johan Oosthuizen (second from right) has set a new world record cycling 100km per day consecutively for 365 days. Seen with him are some of his supporters (from left) Danie and Christel Bothma from Kraaines and his wife Ronelle (right) and son Jayden (3) in front.
Photo: HEILIE COMBRINCK

It is an official world record for extreme cyclist Johan Oosthuizen from Kariega, who has cycled more than 100km daily for 365 consecutive days.

He has not stopped, and whilst celebrating this world record on Saturday, it will be day 371 of cycling 100km a day … and maybe the start of a new crazy challenge?

Oosthuizen, a Coastal Manager at Monster Energy and a founder member of Fuel on Wheels, a local charity organisation, has thus far covered nearly 44 000km and spent more than 1 600 hours on his bike. He has cycled in all weather conditions from extreme heat waves, thunderstorms, gale force winds, snow to plain sailing weather. He has conquered numerous gravel roads, been robbed, faced COVID-19 isolation, been hit by a vehicle, but he never gave up.

“It has been an incredible journey. To me it is not so much to do something for charity, but whatever I do for charity, to do it in a crazy way. I don’t do normal. I thrive on crazy challenges. The more people say, ‘nay it is impossible’, the more I say, ‘yay bring it on!’” said Oosthuizen.

It all started with a 100km for 100 days challenge (for food parcels), which evolved into a 100km for 200 days (Cansa support), then 300 days (Huis van Heerlikheid Bibles and drought relief) and eventually the 365-day challenge (Burre Burger Droogte Hulp and Bibles).

Oosthuizen helped to raise R312 000 for the Huis van Heerlikheid Bible project. This means that they will now be able to distribute about 14 000 Bibles to school children, old age homes and persons in need of Bibles.

“For most of the days I started cycling at 04:00. On average I cycled between three-and-a-half hours to nine hours per day. At one stage I had to isolate for seven days after being in contact with a COVID-19 positive person. During that period, I cycled 400km a day on my spinning bike.”

Oosthuizen said the day he met Burre Burger, his perception of being involved with charity totally changed. “He is a sincere and humble person with a mind boggling and powerful vision. Burre is a role model, my mentor and comrade for good.”

“Without the support I enjoy from sponsors like Eastern Cape Motors, Danie and Christel Bothma from Kraaines who have been sponsoring all the fuel of my sponsored Ford Ranger bakkie, Luister!FM and many others, I would never in a million years have been able to achieve this milestone.

“Monster is an awesome company to work for and through their Monster Energy Cares, for which I am a brand ambassador, they have been supporting my crazy challenges all the way. They even on day 70 of my challenge bought me a brand-new bicycle after an accident in which my bicycle was damaged.

“The largest anchor in life is my wife, Ronelle. She often says nothing, but her constant presence tells it all.

Oosthuizen’s 100km cycling for 365 days challenge has been recorded on the Strava application and he has follower across the globe watching and encouraging him.

He will be joined by Nelson Mandela University netball players, who will be either on spinning bikes or on real bikes; Luister!FM will be broadcasting from 09:00 to 12:00; Monster Girls; Monster Energy Global Team; and various local singers will perform and also Burger le Roux, country singers Christo & Cobus and a surprise performance by another well-known singer.

There will be no entry fee to enjoy the entertainment of the day, but those wishing to contribute financially towards the Burre Burger Droogte Hulp are most welcome to support the venture through financial donations.

We live in a world where facts and fiction get blurred
In times of uncertainty you need journalism you can trust. For 14 free days, you can have access to a world of in-depth analyses, investigative journalism, top opinions and a range of features. Journalism strengthens democracy. Invest in the future today. Thereafter you will be billed R75 per month. You can cancel anytime and if you cancel within 14 days you won't be billed.
Subscribe to News24
Next on News24
K9 arrest suspect with stolen property and drugs